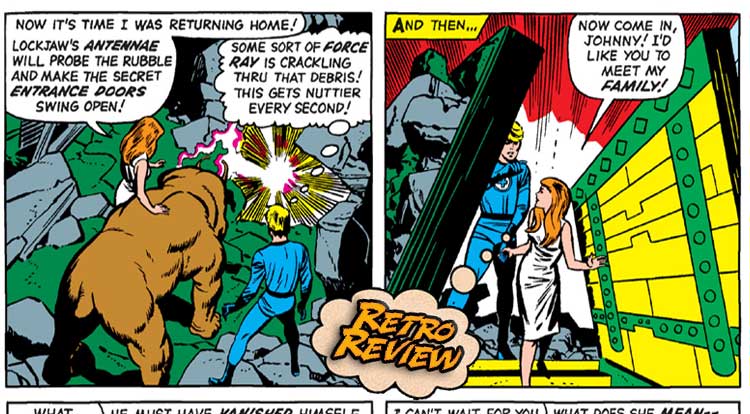 Season 2 of ‘Agents Of SHIELD’ hit recently, and once again we’re getting references to The Inhumans, one of several hidden populations of super-types in the Marvel Universe.  But what’s their deal and where do they come from?  Your Major Spoilers (Retro) Review of Fantastic Four #45 awaits! Previously in Fantastic Four: After a secret space-flight went sour, Reed Richards and his dearest friends became the super-powered vanguard of the age of Marvels: The Thing, stone-skinned titan of Yancy Street; The Human Torch, a walking sun in a loud-mouthed teenage body; The Invisible Girl, who is frankly not as awesome right now, but will totally get impressive later; and Mister Fantastic, stretchy-stretchy brainy dude.  Together, they are the Fantastic Four, greatest heroes of their age!  Last issue, the mysterious monster known as Gorgon arrived and stole away Fantastic Ally (and future member) Medusa, while at the same time, the android known as Dragon Man returned (after his earliest appearance in FF #35) and went on a rampage, stealing the Invisible Girl and flying off into the night.  An attempt to catch the flying monster led to Reed and Ben crashing to a nearby rooftop… Johnny impulsive engages the creature in combat, ignoring the cries of his elder sister to stand down, even busting out his patented hyper-bright Nova burst to bring the monster down.  As Johnny prepares to flambe the Dragon Man (FYI, this is the same Dragon Man who now has a genius intellect and is/was one of the main teachers of Reed’s Future Foundation), Sue finally gets him to listen, shouting that she will handle the creature herself.  After a brief check-in with two members of the Frightful Four (Sandman and The Trapster, captured in a previous issue) who wonder what has happened to their comrade, Medusa, we return to the Baxter Building, where a stunned Reed and Ben watch a now-pacified Dragon Man fly back…

I’m torn about this plot development, as it gives Sue the rare chance to be the problem-solver, but I find myself disliking the implication that she did it with feminine wiles and/or mother instincts, and all-too-common plot occurrence in early FF tales.  While the senior members of the Four decide what to do with the rampaging fantasy robot, The Human Torch goes off alone to brood about the mysterious Gorgon, finally deciding to go for a walk… Returning home, Johnny spends the entire next day wondering about the strange, beautiful girl, before returning to the wrecked neighborhood where he saw her.  He lays in wait for her, in a very Creepy Stalker fashion, before she makes an appearance, at which point he leaps out of the shadows and confronts her, only to find that the girl once again is able to defend herself from the advances of jump-suited weirdos in the night… Believing the flaming stranger to be “one of US”, whatever that means (and, frankly, if you’ve been paying attention to anything other than the pretty Kirby pics, you know dang well) and drops her defenses, assuming that Johnny is no threat.  She even introduces him to her pet, one of Marvel’s most entertaining characters on a purely visual level… Crystal takes Johnny by the hand and leads him into an underground bunker of some sort, explaining that she wants him to “meet the family.” (Man, dating went much quicker in the sixties.)  Of course, since we already know we’re about to meet The Inhumans (it said so on the cover, after all, and Smilin’ Stan would lie to us, would he?), the family turns out to be more than just mom, dad and sister Stephanie. The sight of Medusa, the very woman whose absence started Johnny’s wandering days before, along with the strange Gorgon who snatched her, makes Johnny realize how little he knows about the woman of the animated hair… Karnak, Triton and Gorgon all attack at once, but the resourceful Torch manages to deflect their attacks and melt his way through the ceiling of their stronghold.  Once aloft, the Human Torch takes decisive action to relieve his personal tactical deficiency (or, dropping the Perceptor-speak, Johnny remembers that there’s strength in numbers.)

Having finally taken care of Dragon Man (in the sense that they have gassed him and locked him up while unconscious, not “taken care of” in the movie gangster sense), the remaining members of the Fantastic Four take to the skies to find their junior member, launching one of Reed’s newest inventions and Kirbying it up, old-school. These days, a lot of people don’t care for or don’t find any real affection for the Fantastic Four, thanks to the efforts of lesser artists and the modern tendency to reductively pare out all the cool stuff, but this full-page shot is a reminder of why Stan and Jack’s FF issues are as well-regarded as they are.  The full-page shot may not have been strictly NECESSARY, but it is beautiful to look at, and the visual creativity of the technology is awe-inspiring.  Quickly finding their fourth member, the team begins searching for the secret entrance to the Inhumans lair, unaware that they’re being watched… …and then, things get bad.  That final-panel reveal of the most feared (and powerful) Inhuman of all is terrifying, and I can only imagine being a kid, reading this in 1965, and then realizing that I have to wait an entire month to find out more.  This is the kind of cliffhanger that I love, leaving us in the middle of a tantalizing situation, with the implication that something amazing is about to happen.  All in all, this issue is a great reminder of the merits of classic Silver Age Fantastic Four, as well as the power of Jack’s character design and story-telling.  Fantastic Four #45 opens up a massive can of worms that, fifty years later, is serving as one of Marvel’s largest continuity patches since Mephisto got in the annulment bidness, but you can’t hold that against it, especially with Kirby and Sinnott near the peak of their powers, earning a very impressive 4 out of 5 stars overall.  This is the period of Marvel that shaped the current storytelling model of comic books, and it’s easy to see why: Even as the middle chapter of an ongoing story, it works as a satisfying single-issue reading experience.

A classic issue that is paced very well, featuring some key first appearances and a killer last-page cliffhanger...