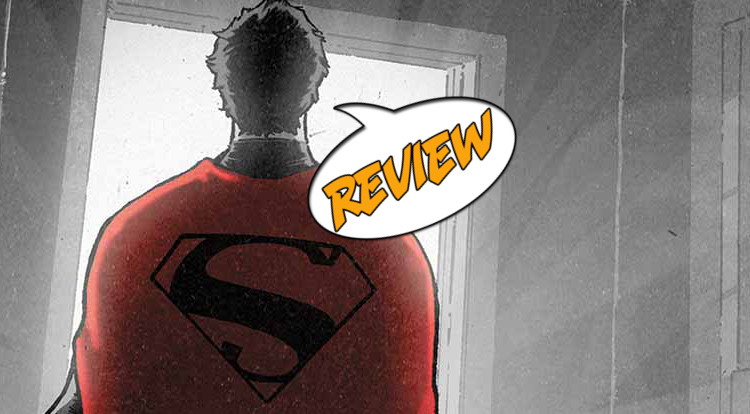 Action Comics #38 pits Superman against the Ultra-Humanite who wields not only Lana Lang, but Clark’s dead parents against him as well. Previously in Action Comics #37: Evil supernatural forces in Smallville continue to become stronger–and Superman has no way to stop them. Will this damnation contamination spread to the rest of the world?

From their start on the series the creative team of Greg Pak and Aaron Kuder have been doing outstanding work and Action Comics #38 is no different. This issue begins with a flashback sequence to the first monster Clark fought – and he fought it to protect Lana. Readers land squarely in the mirror plot of contemporary Smallville that is being ravaged by the Ultra-Humanite – and, if you didn’t know, in the New 52 the Ultra-Humanite is every kind of terrifying.

Action Comics #38 finds Clark in an empty cornfield separated from everyone he had been with in the previous issue. His parents’ house is aflame and Lana is trapped inside. Greg Pak has picked up a classic literary device in the burning house, classically representative of impotence; fire being a naturally occurring element that Superman in all his Kryptonian glory is unable to defeat is so profound. It’s mythic (Greek Gods having often been punished by fire – think of Hades and Hephaestus). In the opening pages Pak has illustrated a deep understanding not only of Kal-El as a character, but of the scale his stories must be presented at.

This issue clips along at a brisk pace with Clark chasing Lana Lang through the burning house. The allusion to his found memory if perhaps not the most subtle, though nonetheless effective. When he reaches the kitchen Pak really brings an emotional kick to Action Comics #38: Ma and Pa Kent are waiting in zombie state to interact with their adopted son. Repeatedly throughout the issue Jonathan and Martha give voice to fears about raising a super-powered child, to the violence he may hold within himself and the caution they always had to live under. The words Pak gives to the Kents would be harrowing to hear from any parents, especially if you allow for the possibility of adopted alien children and they hit home because they are spoken in Jonathan and Martha’s own words.

As mentioned earlier, the big baddie of Action Comics #38 is the Ultra-Humanite and he draws on many real aspects from Clark’s life in order to torture Superman so thoroughly and they appear to very nearly break him. The Ultra-Humanite even manages to get his hands – so to speak – on Hiro, Steel and the children they are looking after in an immediate way.

Toward the end of the issue, Clark is forced to confront the kind of power fear can give and the creeping realization that he may not be able to free Lana as immediately as he had hoped. Pak has crafted an excellent comic issue in the pages of Action Comics #38 and proven, yet again, that he is one of the best writers writing for DC today.

Aaron Kuder deserves to draw Superman for the rest of his life. Action Comics #38 is stunning. Clark is handsome and strong (and the beard actually works … ), the Kent farmhouse holds a history to it as much as the wheat fields of Kansas are sparsely lovely.

In skillful contrast the fire, the spirits, the zombies, the Ultra-Humanite himself are rendered by Kuder so frighteningly that they could have waltzed right off one of Charlie Adlard’s panels and into Action Comics #38. Some of that credit is certainly due to Wil Quintana – the colourist – whose work easily differentiates between the illusion and the real world.

Aaron Kuder proves in the pages here that he can do what readers are looking for in Action Comics #38; he gives us a stunning, strong leading man, but he also brings to life to real emotions played out on a gigantic scale (to match the themes of Pak’s writing), in a dark place that each and every reader is glad to not have to take on themselves.

Action Comics #38 is, quite simply, a stunning issue.

THE BOTTOM LINE: YOU DESERVE TO READ THIS

Action Comics #38 is a great issue. It embodies everything that a Superman story ought to be. The creative team could not be more perfect and if you aren’t reading this series you are missing out, my friend.

Action Comics #38 is an issue that takes the great scale and emotion Superman needs in opposition to the personal story readers can relate to. Plus, the Ultra-Humanite is scarier here than you've ever seen him!