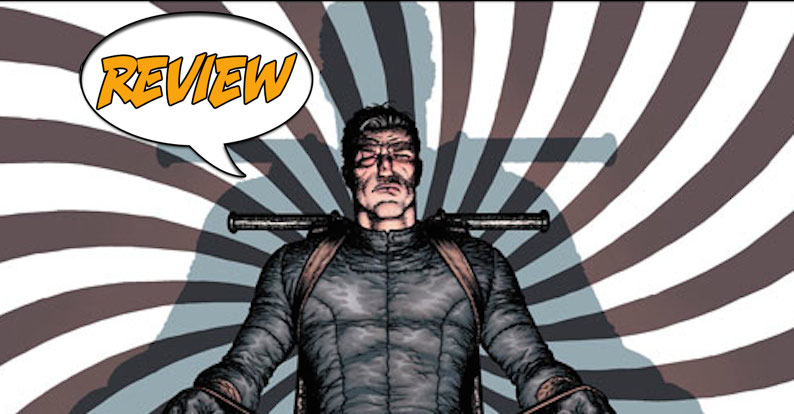 By WilsonNovember 23, 2014No Comments5 Mins Read

Grant Morrison and Frank Quitely are a strong duo, having created some truly great comics.  They’ve reunited once again on Multiversity: Pax Americana #1, the newest adventure into the Multiverse and mind of Grant Morrison.  How crazy does this one get?  Click on dear reader and find out! Previously in Multiversity:  All hell has broken loose in the Multiverse as Nix Uaton has been infected with evil.  Spanning across multiple universes, we’ve seen Earths with different Justice Societies, celebrity heroes, and President Superman.  Now we head to Earth-4, home of the Charleston characters.

No of course not, right?  How could it be?  Well, this doesn’t end with a giant squid for one.  In all seriousness, Multiversity: Pax Americana #1 has a lot of thanks to give Watchmen but also succeeds in places Watchmen failed.  I spent an hour reading Multiversity: Pax Americana #1.  Not because it took me that long or I had to.  Not because it was so confusing I didn’t understand it.  No, I spent an hour going throughout the issue multiple times because there is so much to look at, find and interpret that each read through was a new experience.  Based off ideas in this issue, it’s certainly Morrison’s intention.

This is Earth-4, home to the Charleston Comics characters whom the big bearded Alan Moore used to mirror in the Watchmen.  This issue has Captain Atom, the Question, Blue Beetle and Nightshade to name a few.  Out of all the Multiversity issues to come out, this one is most definitely the least accessible and possibly confusing.  It takes a lot of attention and multiple reads are required, but it is so good you’ll find yourself excited to open it again.  The basic plot revolves around solving the mystery of why Peacemaker assassinated the President of the United States.  Morrison’s concepts of reality, dimensions and comic book storytelling devices are cranked up to 1,000.  The issue can be read beginning to end and end to beginning.  In fact, I found at least four ways which that still made the story coherent.  Morrison has always enjoyed how the reader can look into the character’s universe at different times and how the way you read a comic creates a new experience.  This couldn’t be more true with Pax Americana and Captain Atom goes so far as to look the reader in the eye and tell them so (a truly wonderful moment).

Not only is the experience of reading the issue great, the writing is fantastic as well.  Dialogue sounds realistic and the characterizations are clearly modeled after Watchmen.  I’d argue that the Question in this book is way more insane than Rorschach ever was.  If I have one complaint it would be that Morrison seems to be mimicking Watchmen too much, borrowing many devices and ideas, and even though he and Quitely make it their own, there’s still an uneasy sense of envy.  But, if Moore can “steal” ideas and characters so should Morrison.  There will certainly be readers who won’t understand the story and God help the poor S.O.B. who makes this his first comic.  I’ve talked to two people and both had different interpretations and misunderstandings.  Some may pass this off as another crazy Morrison story but I say out of all his unusual techniques, this one manages to still make sense.  Not everyone is going to spend an hour with this comic, nor should they, but multiple reads will increase the enjoyment of those willing to but in the effort.

I understand complaints about Quitely’s art but the guy draws his heart out.  I’m amazed this issue came out frankly, considering his problems with deadlines.  Every minute detail is drawn and the layouts have extremely specific and extraordinary look.  Morrison gives tons of themes and visual imagery for Quitely to put in and it’s clear the two must have worked closely for this to work as well as it did.  The number eight (referencing the equation in the story) is referenced throughout, which also happens to be the sign for “infinity”, once again supporting Morrison’s idea of infinite storytelling.  Characters walk throughout the panels in loops and the dialogue mimics action (another Watchmen technique) numerous times.  There is a double page spread that blew my mind where the Question walks throughout a crime scene, talking through how the murder was committed.  As this happens, there are panels mixed in from the actual murder as well as a time just before.  It’s one scene taking place in three different periods of time and pulls them together cohesively.  I caught onto other subtle visuals such as a making some scenes look like the characters are standing in front of a gun barrel, three dots of blood and, at one point, the panels somewhat resemble the squares of the Golden Ratio.  It’s incredibly impressive stuff and just another reason to keep reading.

THE BOTTOM LINE:  BEST BOOK OF THE YEAR?

Maybe not of the year but certainly the best in as long as I can remember.  Morrison succeeds in using his unconventional storytelling in a way that manages to be intelligible.  That’s not to say this one won’t leave you scratching your head but pay attention and give it a few go throughs.  Quitely’s art and ability to convey whatever is in Morrison’s drug addled mind is amazing and makes the issue even more substantial.  There are many similarities to Watchmen, not many of which bothered me, but that’s to be expected with the Charleston characters.  If the idea of engaging in a comic so intensely and numerously turns you off, this isn’t the book for you.  But ask yourself this: In a time when comic readers continue to be upset by pricing, doesn’t engaging a single issue heavily make it worth $4.99?  I think so.

Pax Americana is brilliant in its storytelling and art. There is so much depth that it requires multiple reads. That may upset some but makes the price point worth it. A little too much is borrowed from Watchmen but this is truly a wonderful piece of work.