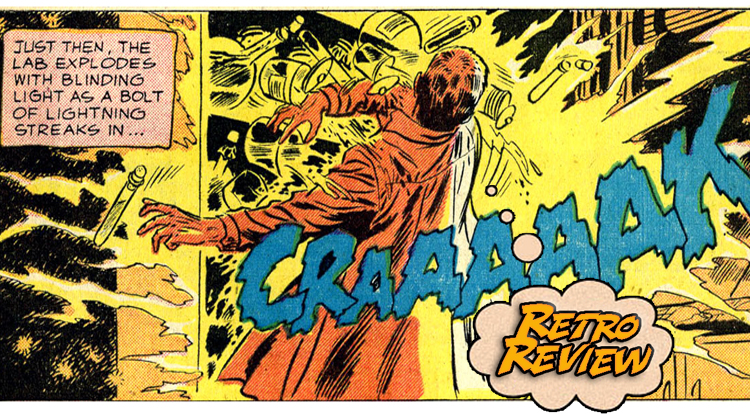 We’re wrapping up Flash Month in our Retro Review Corner!  The Golden Age of Comics was full to the brim with super-heroes of all shapes and sizes, including more than one guy who ran fast.  When editor Julius Schwartz went looking for a new character for Showcase, he went back to the beginning and rebooted one of the first, which led to a whole new superhero renaissance.  Your Major Spoilers (retro) review of Showcase #4 awaits! Previously in Showcase:  The ages of comics are difficult to nail down, and many people have differing opinions on when and where they start and end.  For me, the end of the Golden Age of Comics was the cancellation of Flash Comics in 1949, leaving only a few superhero books still on the stands.  Superman, Wonder Woman, Batman (and, oddly, Johnny Quick) never disappeared, but by the time Julie Schwartz wanted a new feature for Showcase, The Flash was nowhere to be seen in comic form, but it’s amazing the difference a few years can make.  As we open our tale, we meet young police scientist and comic book fan, Barry Allen, as he enjoys an adventure of his favorite super-duper, The Flash! There’s a really strange moment built into this conceit, one that would shape the entire Silver Age of Comics, and eventually lead to the Crisis On Infinite Earths 30 years hence: The expectation that Jay Garrick was a fictional character in Barry Allen’s world.  It’s a really post-modern bit of storytelling, one which really doesn’t hold up under scrutiny, as Jay was a compatriot of Superman and Batman in the Justice Society.  Since Barry would soon meet both those men, the seed of the Infinite Earths is right here.  Either way, they didn’t bother with long-winded explanations back in ’56, either, as by the end of page two, Barry has had his full origin, but has missed his cab.  He starts to run… …and ends up halfway across town.  This story has been told and retold, but I especially remember when it became the pilot episode of The Flash, back in 1990 or so, and it’s pretty much a required part of the story of what happens when you get super-speed powers.  Interestingly, rather than just focus on running really fast, Broome immediately throws in the detail that Barry Allen’s entire being is capable of gearing up to super-speed, including his mind and his perceptions, given the right trigger.  Fortunately, Barry really loves his Beanie-Weenies… It’s really interesting to me to see the noticeable elements of Joe Kubert and Carmine Infantino’s trademark art-styles warring for supremacy in this story, especially given how different they are as artists.  Barry, being a good comics fan, quickly realizes the implications of super-powers, and decides that he can take up where his comic hero left off back in ’49… The quick introduction of so many classic elements of the hero in so few pages is kind of breath-taking, a reminder of how many actual game-changing ideas are in play in this issue.  The original Flash’s costume is one of the hardest ones for a modern audience to try to process, since he’s basically wearing dungarees, a pullover and a doughboy helmet, but the redesigned uniform is one of the most perfect costumes in comic book history.  In keeping with his speedy nature, Flash quickly leaps into action against The Turtle Man… slowest man alive! Turtle-Man’s entire schtick revolves around moving so slow that his pursuer’s own haste is used against them, sort of like judo, only with a fat guy in a turtleneck sweater.  The clash with The Flash goes his way quickly, and the green-clad criminal escapes in a row-boat.  When Flash runs after him (running on water for the first time, it should be added), the waves created by Flash’s own boots push his enemy further away from him with each tread of his feet.  Turtle-Man gloats for a moment before he realizes that Flash has broken off in another direction… Iris West is probably the only portion of this issue that I don’t really care for, as in these early stories, she’s little more than a Lois Lane knockoff, trying to unmask the Flash and being a general jerk to Barry Allen, thus reinforcing the Schadenfreude for our hero and the twelve-year olds his adventures seem to be aimed towards.  Interestingly, though I’ve read many a reprinting and retelling of the first half of Showcase #4, I don’t recall ever having sat down to peruse the SECOND half before today, though it has a lot of elements that would recur in The Flash’s Silver Age adventures.  We begin with the people of Central City dealing with a wave of sudden, inexplicable events… Barry leaps into action as The Flash, and confronts the perpetrator, a mysterious bald man who reveals that his name is Mazdan (Zoom Zoom!) and he is from…

THE FUTURE!  Using a mysterious device, he evades The Flash by generating rings of deadly heat-energy, the thief reveals that he was exiled into the past as punishment, but has used his super-science to create devices to steal the resources he needs to propel his capsule back to the future.  (As of this writing, there is no word as to whether the problem is his kids or not.)  Flash confronts him while he is breaking into a vault for gold, and uses his impossible speed and extensive scientific knowledge to counteract future technology. Capturing the future-man proves futile, as he is quickly at large again, leaving The Flash to capture him once again.  Revealing that he won’t stop his thieving ways until he steals what he needs to get back home to the future, and that his capsule will likely kill hundreds of people when it takes off, though Mazdan doesn’t particularly care.  How does our hero deal with this shocking news?

By grabbing the villain by the scruff of the neck, and using the superhuman speed that he’s had for all of an hour and a half to SHOVE HIM FACE FIRST THROUGH TIME. The best part is how he uses Mazdan’s face as a shield against the rigors of time-travel and any wayward bugs that they might happen to encounter.  Once in the future, he hands Mazdan over to the authorities, who lock him up and thrown away the key, while Flash returns home only seconds after he left, and remarks on a job well done.  I hadn’t realized that The Flash had unlocked the secret of time-travel this early in his tenure, but it’s par for the course of what John Broome and company did with the character in the first few years of his history.  Showcase #4 is an odd issue in a lot of ways, but kick-started an entirely new era in comic book production, with good reason, as each page is chockful of innovative ideas and cool art, earning 4 out of 5 stars overall.

An interesting read, and historically important for a very good reason...