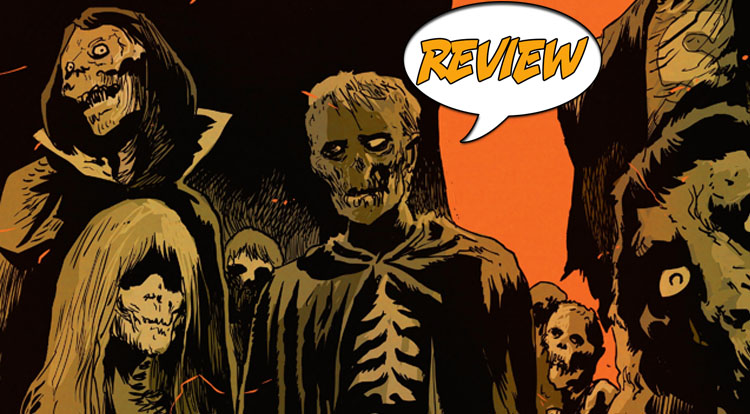 The Archie title that makes your question everything you know about Archie titles returns after a brief hiatus, and the body count continues to rise.  As an army of the dead surrounds Lodge Manor, the question arises: Will any of Riverdale’s teens survive the zombie apocalypse?  Your Major Spoilers review of Afterlife With Archie #5 awaits!

Previously in Afterlife With Archie:  As with most horror stories, it all started with one tiny mistake.  Reggie Mantle didn’t mean to kill Jughead’s beloved dog while joyriding, and Sabrina certainly had only the most noble of intentions when she used her arcane powers to resurrect Hot Dog.  Unfortunately, that sort of magic has a price, and Sabrina quickly discovered that it was a dear one indeed.  First, Jughead was bitten, then Ethel, and soon Riverdale was under siege by the shuffling undead, with Sabrina unable to do anything more than watch as everything fell apart.  Now, Archie Andrews and the few remaining survivors are holed up in Lodge Manor, safe from Juggie and his zombie horde, but… for how long?

A NEW PERSPECTIVE ON EVEN THE MOST MINOR

In a world where hybrid genres and crossover stories are the norm, it’s easy to see how a horror story featuring the shiny, smiling Archie comics cast could be a quick, campy story and still be successful.  If you’ve read any of the previous issues of this book, you know that Aguirre-Sacasa and Francavilla have no interest in that, instead mining the depths of Riverdale’s massive cast and putting a new spin on the existing characters.  This issue is narrated by Smithers, the Lodge family butler, and in the space of a few pages, gives him the most fascinating back story and family history, explaining that the Smithers line has served the Lodge line for over seven decades.  Smithers has also lived by his father’s advice: Be indispensable, and be invisible.  As such, he sees all at Lodge Manor, witnessing the conflict between Ginger and Nancy and Chuck (a love triangle, with Nancy in the middle), the incestuous drama of the Blossom twins, and an ugly moment between Kevin Keller and Reggie Mantle where Kevin offers empathy, and gets a faceful of Mantle’s homophobia.  (He does, however, sock Reggie right in the mouth, causing Smithers to wonder where Mr. Keller got his combat training.)  The creators also manage to preserve the Betty/Archie/Ronnie triangle in the midst of the chaos, with Smithers himself stepping in to protect Veronica in a wonderful touch of character.  When Dilton discovers that the Manor is not as impenetrable as it seems, chaos breaks out, and it’s up to Archie Andrews to step up and become the leader that these poor survivors so desperately need.  (It’s his name on the covers for the last 80s years, after all.)

What can I say about Francesco Francavilla’s art that doesn’t sound like fawning, mindless praise?  Every page of this issue is utterly fascinating, with deep shadows and heavy blacks to emphasize that we’re in a horror story, but still keeping the iconic look of the Archie characters (albeit in a more realistic style.)  When the zombie army began smashing against the splintering glass of the Lodge solarium, I actually had to look away in distaste, as Francisco has nailed the oppressive feel of being in a Romero film.  That revulsion isn’t the only emotion the issue dragged out of me, as I was actually frightened for our crew, surprised by the actions Archie takes during the issue, and even saddened by the quick appearance (and even quicker dispatching) of a zombified Coach Kleats.  For some reason, that hurt more than Weatherbee eating Grundy in a previous issue.  The most satisfying part of reading ‘Afterlife With Archie’ is the fact that Aguirre-Sacasa is writing a flat-out, no-holds-barred horror story, and neither he nor Francavilla pulls any punches just because this is Riverdale.  This issue further develops the tragic life of Veronica Lodge, and goes a long way towards explaining why she’s such a bitchy flibbertygibbet, making me adopt this as her official back story in regular canon stories as well.

If you’ve been privy to any of my previous reviews of ‘AwA’, then you probably know what I’m going to say: I want you to go and read this book.  It’s truly inspiring how well the creators have been able to adapt the existing characters and personalities of the Archie ouvre into a story of terror and suspense, and there may not be a more creatively synced writer/artist team working in monthly comics today.  Afterlife With Archie #5 takes an unexpected turn, but still holds together and deepens the already intriguing elements at play, and looked phenomenal doing it, earning 5 out of 5 stars overall.  I don’t know where the series goes from here, but I’m frankly dying to find out.  (*THAT* one was a pun.)