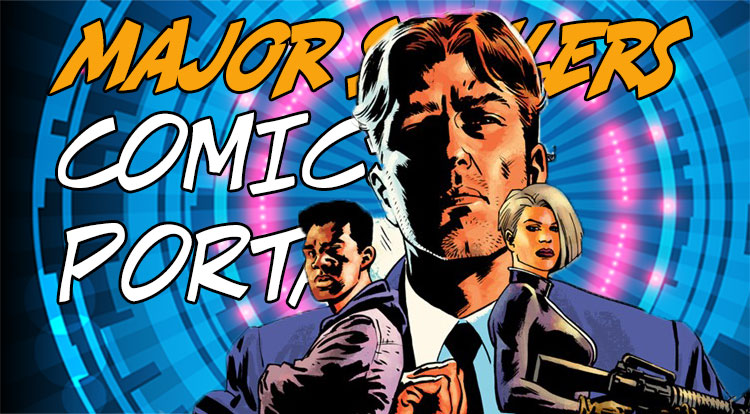 Even though this website is called MajorSpoilers.com, I still don’t like it when serious plot points in a story I’m looking forward to reading are given away. And I steer clear of ruining a story for anyone else as a result.

What I would prefer to receive are hints, which I define as giving me some idea as to what’s going to happen, but not blatant spoiling, telling me in no uncertain terms what the big mystery is all about.

REVIEW COPIES SHOULD BE KEPT QUIET

Many comics companies (though not all) will send what are referred to as “review copies” of soon-to-be released books to people who write up previews or reviews for sites like this one. I do receive some because I write reviews, but I’m very conscious of what the “big reveal” is in an issue. I may tease it a little, but I will never post a page with the most important part of a book in it.

I wish everyone did that.

Occasionally, I’ll come across a preview of a book that basically gives away the whole story by reproducing pages that I’m sure its creators would not want revealed. When I realize what’s happening, I shake my head in disbelief! Comics are meant to be bought, not given away by page reproductions on a website. You’re costing the creator and the company money when you do that! Eventually if that happens often enough, they won’t make enough money, and we’ll have to look elsewhere for the quality we prefer!

I’m proud to say that I’ve never seen this happen here at MajorSpoilers.com (even in spite of our name). I also am glad when reviewers indicate that a spoiler is coming, so the reader may want to stop reading until he or she has read the book.

Sometimes companies are too anxious to make a buck instead of remembering that the story’s the thing.

For years, many of us noticed that action figures based on a comic-related movie gave away plot points. The Green Lantern film, once the toys were announced, lost some of its mystery when a figure revealed something about the story, for example.

But every once in a while, a crafty movie producer will pull a fast one on us, and I love that! Case in point: When Batman Begins was coming out, I went to the local toy store to find a Ra’s Al Ghul action figure that greatly resembled the character in early portions of the film. And I went, “Oh, okay. This is what he’ll be like in the entire film.”

Well, when the big reveal happened later in the film, when Ra’s turned around and it was obviously a different person than seen previously, I remember thinking, “HUH? But the action figure looked like the original actor!”

Then when the REAL Ra’s was shown, the film went from a “very good” movie to a GREAT one, in my opinion! I loved the fact that even the toys were released to keep the secret until the excellent big reveal  took place during the movie.

And since that movie has been out literally for years, I don’t think that needed a spoiler alert, by the way.

Once upon a time, I used to host a 24 chat, and all of us there were watching the season finale as it aired … all of us but one person, who had obtained a copy of it in advance. He or she watched it, making sure he was three or four minutes ahead of the rest of us. He spoiled every reveal before any of us could see it. Needless to say, I had to ban him from the room once I realized what was going on.

That person took pleasure in draining all the fun out of that episode! We let him or her know it really was NOT appreciated.

KEEP THE SECRET AS LONG AS YOU CAN

Recently, Image’s Ghosted had a plot point that, for the life of me, I couldn’t figure out. How in this world do you “collect” a ghost? Keep it in a jar, a bottle? But they can move right through them since they’re intangible!

Even when I interviewed scripter Joshua Williamson about the book, he didn’t tell me what the solution was.

Thankfully, no one else did either. When I got home with the landmark fifth issue, I couldn’t wait to read it. When I saw what the writer had crafted, I was thinking, “Yep, that’s a good way to do that!” It was a very satisfying read that no one spoiled for me, and I thanked everyone involved for it! That’s why Mr. Williamson is a writer and I’m a reader!

That’s what’s important to people who appreciate story … being able to experience it how and when the creator intended for us to enjoy it. If you think it makes you seem smart to be able to ruin something for someone else, please know that instead it makes you appear like a spoiled kid who doesn’t care about anyone else.

Keep your “reveals” to yourself until the rest of us can discuss them intelligently with you! We’ll think much more highly of you, and we’ll get our money’s worth out of what we’ve paid for! There’s nothing better than that!