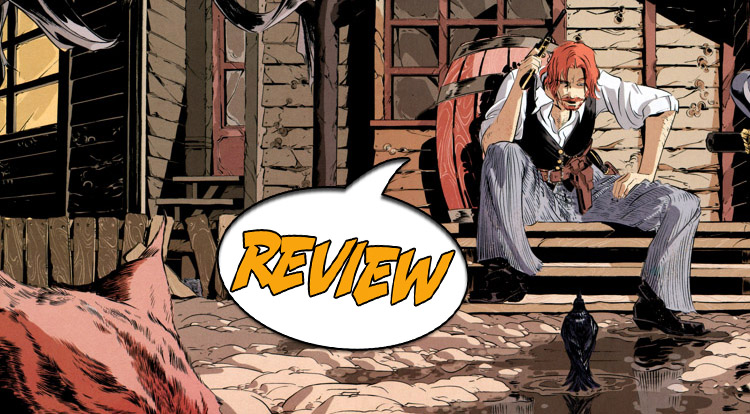 If you watch ‘Big Bang Theory’, you know from Stuart’s sad little life that working in a comic book store ain’t all free beer and Iron Man helmets.  Still, there are some major upsides, especially when you’re the official Back Issue Guy, such as when a sold-out book shows up in a lapsed customer’s pull list, and you decide whether it goes in the back issue bins or *your* pull list.  So it was with the first three issues of Pretty Deadly recently, and having read them all in quick succession, I was gratified to find #4 on the stands this week.  Does the book hold up?  Your Major Spoilers review of Pretty Deadly #4 awaits! I’M A SUCKER FOR A POEM

In a way, I’m really kind of glad that I fell ass-backwards into reading this title the way that I did.  Having heard some feedback, I was intrigued that nobody was talking about plots, nobody was over-explaining the things that happened in the issue the way that I worry I do when I’m not focusing, nobody was farklempt about a big action sequence or bit of dialogue.  The positive feedback was all nebulous, so when I got a chance to read the first three issues I had no idea what to expect, other than “People I listen to liked this.”  So, when the first issue was beautiful, but maddening, I could jump straight to number two, then number three, and by the time I got to this issue, I was hooked.  We open with another beautiful framing sequence, as each issue has had, with two characters (and trust me, any explanation I have for the whos and whys of those characters would be ridiculously dull and prosaic) making their way together, as one tells the other a tale, which is our story for the issue.  And the art…  Oh, god, the art.  The first two pages focus mostly on a hummingbird, and it’s some of the most mesmerizing stuff I’ve read in many a year of comics reading.  There’s an organic loveliness to every panel, enhanced by perfectly subtle coloring, creating beauty out of even the most terrible things.  After nearly being lost in a flash flood, a young girl named Sissy is pulled from the waters by the rogue Johnny Coyote, and two tracks of our story combine into one for the first time, leading them both down a path that is as inevitable as any folk tale, and probably leads to their inevitable doom.  Trying to discuss what actually happens in the book is maddening, as every character carries volumes of untold stories with them, and the interaction of story and art turns it into something that’s hard to describe.

More of our characters begin aligning, with one returning from the dead, another revealing the truth of what has been going on in the midst of a terrible beating, while Ginny (who I keep thinking of as the main character, but in the same way that Maximilian is the main character of ‘The Black Hole’, and yes, I’m aware that people will alternately not get or not care about that metaphor, thank you) gets a defining moment that for the first time really lays out for me what her goals are.  The thing is, I’m not sure what any of the characters are going to do from page to page of this story, and yet when things occur, I inevitably think, “Yeah, that’s what he/she would do.”  This issue seems to be moving the first bits of story towards a climax, which might be a confrontation with Death Himself, or might be something entirely more metaphysical.  Either way, my major worry is that the book is going to be only six issues long, which is an utter shame.  One of my coworkers referred to this comic as “mythical”, and it’s pretty much the only appropriate word for it, as ‘Pretty Deadly’ plays with archetypes in the same way that Neil Gaiman’s ‘Sandman’ did, and I find myself over-analyzing everything, wondering if I missed something important in the themes of the book.  Trying to explain what’s good about this issue reminds me of Phil Hartman as ‘Unfrozen Caveman Lawyer’:  I’m just a simple comic nerd who always kind of wanted to be Indiana Jones, and I’m not sure that I have the words to fully explain what the experience of reading a book like this is like.  But, I do know that it’s an experience I enjoy, and one that I intend to keep having as long as they put it out.

THE BOTTOM LINE: I KINDA LOVE THIS

In short, Pretty Deadly #4 continues the series’ excellence, building myth and dramatic tension through sharp dialogue, great character work, and a weirdly/wonderfully ethereal writing ‘voice’, all wrapped up in some truly beautiful art, earning 5 out of 5 stars overall.  When I put this issue down, I went back and read #1 through #3 again, then this issue one more time, and I have come to the conclusion that this series is two creators who mesh perfectly, telling a story that they both want to do justice to.  Don’t be put off by the lack of super-dupers or the implications that it’s a “western”, Pretty Deadly is more than just the sum of its parts, and it’s a story that I highly recommend to anyone who likes their comics smart, complex and well-drawn.