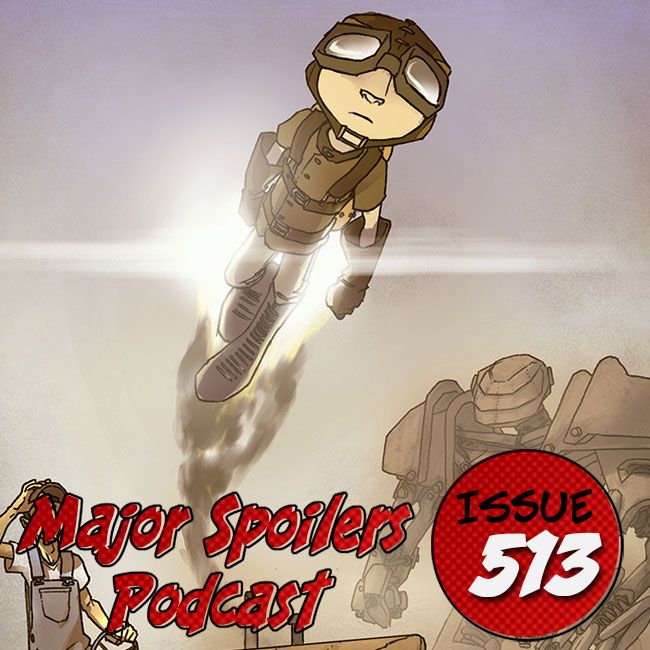 This week, on the Major Spoilers Podcast: A flying boy in Rust, rabid rats infest in the Last Plague, doom comes to Locke and Key, and the Age of Ultron doesn’t score high for one reviewer. Plus, Richard Parker or Wilson?

REVIEWS
STEPHEN
Locke & Key Omega #4
Writer: Joe Hill
Artist: Gabriel Rodriguez
Publisher IDW Publishing
Cover Price: $3.99
Chapter Four – Human Sacrifices: The bottomless pit of the Drowning Cave threatens to become a mass grave, as Dodge springs a fatal trap on the senior class of Lovecraft Academy. Hope is as fragile as a candle-flame wavering in the night… and as easy to extinguish.

MATTHEW
Age of Ultron #3
Writer: Brian Michael Bendis
Artist: Bryan Hitch
Publisher: Marvel
Cover Price: 43.99
For years the heroes of the Marvel Universe have lived in fear that the artificial intelligence known as Ultron would one day evolve to fulfill its desire to wipe out all organic life and take over the Earth — that day has arrived. This massive 10-part Marvel Universe-spanning event is brought to you by Eisner award-winning writer Brian Michael Bendis and comics legend Bryan Hitch.

RODRIGO
The Final Plague #1
Writer: J.D. Arnold
Artist: Tony Guarldi-Brown
Publisher: Danger Zone
Cover Price: $3.99
“The Final Plague has begun, and with it mankind’s final hours. Can a rural Iowan family survive the initial onslaught of crazed, rabid animals, presumably the product of a mutated super-virus? Or will they succumb to the plague that threatens to end all life as we know it? From the creator of Top Shelf’s BB Wolf and the 3 LPs.”

ZACH
Skybreaker #1
Writer: Michael Moreci
Artist: Drew Zucker
Publisher: Monkeybrain Comics
Cover Price: $.99
From the creator of Image’s HOAX HUNTERS and newcomer Drew Zucker comes SKYBREAKER, a dark tale of revenge set in the Wild West. Skybreaker is a man of two worlds, half Sioux and half Christian. When these worlds clash, he is betrayed and left for dead–and now it’s time for revenge. SKYBREAKER explores the violent roots of American life, and how you can never kill your way to peace.

Major Spoilers Poll of the Week
Stranded Edition
Rodrigo and I had an interesting discussion the other night following a massively long recording of Muchkin Land – a fan podcast that celebrates the card game Munchkin from Steve Jackson Games.  I know i didn’t need to explain the podcast to you, because you already listen to it faithfully as one of the Major Spoilerites.  Regardless, the topic of being stuck in a boat in the middle of the ocean or stranded on an island worked its way into the conversation and Rodrigo raised an interesting question.

Discussion:
Rust Volume 1
Rust is a high-octane adventure set in the prairie lands of an unknown time. Life on the Taylor family farm was difficult enough before Jet Jones crashes into the barn, chased by a giant decommissioned war robot! Oldest son Roman Taylor struggles to keep his family’s small farm afloat as the area heals from a devastating world war. While the rest of his family may not trust the mysterious boy with the jetpack, Roman believes the secrets of Jet’s past may be the key to their survival.