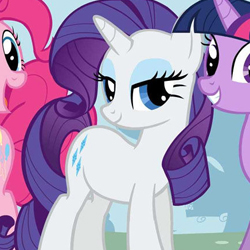 From the Vault: My Little Pony Friendship is Magic: The Friendship Express DVD

I’ve always had a complicated relationship with the My Little Pony franchise. I always really liked them aesthetically and spent a good deal of time trying to convince my sister to let me play with the ones she had. The ponies often became mounts for He-Man and Nien Nub, and my sister was OK with it as long as I was willing to let her play with Teela every once in a while.

But when it came to the animated shows I usually found them saccharine, trite and even disingenuous. Which was sad because I always liked the toy design. I wanted to like the show, but I just couldn’t. Enter “My Little Pony: Friendship is Magic” a show that incorporates everything I like about My Little pony (mainly awesome product design) but replaces the stuff I didn’t like with MORE stuff I like, namely a subtle and self-aware sense of humor. What’s not to like?

So today I’ma talk about My Little Pony Friendship is Magic: The Friendship Express. This DVD collects five episodes from the first two seasons, including the two-part pilot “Friendship is Magic”. Now, I will absolutely admit that I usually don’t like collections like this as they seem like a ploy to trick your grandma into re-buying things for you. You know what I’m talking about, remember when your grandma bought you the first two seasons of “Justice League” for christmas, and then also got you the “Paradise Lost” DVD for your birthday because she didn’t realize those episodes were included in season 1? That’s what I mean.

That said, I’m willing to give this collection a pass because it’s actually a good sampling of what Friendship is Magic has to offer. If you want a good cross-section of what you find across two seasons, this DVD will give you plenty to enjoy. You want epic adventure? The pilot’s got that. You want old school storytelling? Heart’s Warming Eve’s got you covered. Want to see a kid’s show deal with racial tension? Over a Barrel has what you want.

Additionally, the DVD contains a handful of charming special features including Pony bios, some printable coloring pages and a sing-along extended cut of the themesong. It’s certainly cute, the only problem with it is, it’s a version that actually omits the little bridge in which you hear everypony sing a line of the song… which is the part of the song I like the most.

Magic Makes it All Complete

In the end I would much rather buy the full season than the “Friendship Express” Collection, which I think is more a commendation of the show than a condemnation of this DVD. Again, though, as a sampler of ponydom this collection does an excellent job. My Little Pony Friendship is Magic: The Friendship Express will be released on DVD on February 28 and earns three stars out of five from me. A fine DVD with great content that only suffers from the meta-problem of making things difficult to collect.