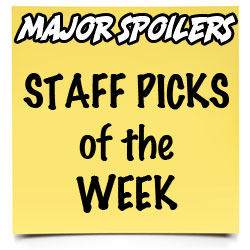 AMAZING SPIDER-MAN #678
Writer: Dan Slott
Artist: Humberto Ramos and Victor Olazaba
Publisher: Marvel
Cover Price: $3.99
SOLICITATION: New York City is destroyed because of Spider-Man! A glimpse of the future leaves Spider-Man with 12 hours to figure out how to stop it from happening.

STEPHEN: Can’t believe this series comes out three times a month, and still retains its creative edge and quality story telling. Wish every publisher could crank out a three or four times a month title. Did I just call out DC? Maybe, dear reader, maybe… ANIMAL MAN #2 (Second Printing)
Writer: Jeff Lemire
Artist: Travel Foreman
Publisher: DC Comics
Cover Price: $2.99
SOLICITATION: Maxine’s new abilities continue to terrify Ellen and Buddy Baker, and things take a turn for the worse as Buddy begins a startling transformation of his own that will lead him on a journey into the heart of The Red. Meanwhile, The Hunters Three arrive on Earth and set their sights on the Baker family. The Hunt is on as DC’s most surprising new series continues to take ANIMAL MAN in shocking new directions.

RODRIGO: Animal Man #2 is going back to print and this time I’m totally getting it. I’m way behind on all the new 52 stuff and checking in on Buddy and the horrendous abominations hanging out with his kids is just the kick I need. BATMAN #5
Writer: Scott Snyder
Artist: Greg Capullo and Jonathan Glapion
Publisher: DC Comics
Cover Price: $2.99
SOLICITATION: Deep beneath Gotham City lies the Court of Owls’ deadliest trap – and Batman has fallen right into it! Can he escape, or will he perish in a maze of nightmare? Enter the labyrinth, Batman – if you dare!

JIMMY: Scott Snyder has been killing it on Batman, and while I’m not a huge fan of Greg Capullo’s art (I’d much prefer Szymon Kudranski on this title), Snyder’s story has been incredibly well-crafted. Snyder’s work on Batman is as masterful as Grant Morrison’s while avoiding all the headaches and acid trips.

GEORGE: Scott Snyder has made a fan out of me with his work on this and Swamp Thing. The strongest of the post-New 52 Batbooks has Snyder and Greg Capullo crafting a story of generational conspiracy with Gotham and the Wayne family at the forefront. Snyder has almost made a character out of Gotham City in this arc, positioning it first as Batman’s ally in his vigilante battles, before pulling the rug out from under the Caped Crusader’s boots. And Capullo’s take on Batman should not be missed.

STEPHEN: Scott Snyder messaged me to tell me that this was his favorite installment of the series to date. With the big Court of Owls crossover on the way, this issue better cement Batman as a must read each and every month. Yes, I do have high hopes. ZACH: Chew is hands down my favorite read every month; it has never let me down to date. Of course, I would still buy this book if there were no words because Rob Guillory’s art is that good. Seriously, do yourself a favor and go buy the four trades that are out and get completely caught up with Chew, you will never regret it. DAREDEVIL #8
Writer: Mark Waid
Artist: Kano
Publisher: Marvel
Cover Price: $2.99
SOLICITATION: Get ready for the second part of the Spider-Man and Daredevil team-up! Picking up where AMAZING SPIDER-MAN #677 left off, the next great love triangle of the Marvel Universe heats up!

STEPHEN: As good as Amazing Spider-Man #677 was, I can’t wait to see what happens next! Mark Waid hasn’t let me down yet, and I’m interested to see what Kano whips up this issue. And since it is all part of the big DD/SM/BC three-way thing going on, I’m on board both books for the duration. RODRIGO: Been meaning to check out what the latest version of Ghost Rider is up to, I haven’t heard much about this book, but it’s up to eight issues. That’s gotta be a good sign, right? GHOSTBUSTERS #5
Writer: Erik Burnham
Artist: Dan Schoening
Publisher: IDW Publishing
Cover Price: $3.99
SOLICITATION: The smash-hit ongoing series continues in this second story arc! Thanks to the results of their latest adventure, P.C.O.C. chief Walter Peck punishes the Ghostbusters by using the contract the team signed with the city to bar them from doing their jobs… at least until they meet his “reasonable physical requirements” for ghostbusting work. While they groan about having to lose weight and look for a loophole to Peck’s authority, strange things are brewing outside Schenectady. KIRBY GENESIS: DRAGONSBANE #1
Writer: Robert Rodi
Artist: Fritz Casas
Publisher: Dynamite Entertainment
Cover Price: $3.99
SOLICITATION: pinning out of the epochal events of KIRBY: GENESIS comes the saga of Sigurd Dragonsbane, the greatest champion in all Valhalla. Since time immemorial tales of his adventures have resounded throughout the halls of gods and men alike. But what happens when Sigurd and his colleagues-wise Balduur, rakish Honir, and caustic Heimdall—discover that Valhalla isn’t the only mythic realm?… And that all the others are now conjoined into one vast magical landscape? Why, they set out to explore it, of course—and to rescue a princess beset by dragons. But all isn’t as it seems in these newly unified Mythlands, and Sigurd’s latest exploit could be his last! Based on character concepts and designs by Jack Kirby, Dragonsbane draws back the curtain on the astonishing mythical underpinnings of the Kirby universe.

JIMMY: I haven’t picked up much of the Kirby Genesis books, but the ones I have I’ve really enjoyed (I reviewed Captain Victory #2 a few weeks ago, ). I am planning on using Dragonsbane as a way to jump further into this new old universe, and will probably read some of the back issues of the other Kirby Genesis tie-ins I’ve skipped. I have no idea if this issue will be a good jumping on point for new readers, but since it’s a #1 it couldn’t hurt to try! RODRIGO: Whew, good thing companies are so willing to reprint their successful books, otherwise my entire collections would consist of #0 and #4 issues. I want to see what’s up with the Ninja Turtles, I hope they’re doing justice to every ENTIRELY DISPARATE take there has been. I want to see Black and White angst AND 90s hip- hop. TINY TITANS #48
Writer: Art Baltazar and Franco
Artist: Art Baltazar
Publisher: DC Comics
Cover Price: $2.99
SOLICITATION: Because you demanded it – Tiny Titans unmasked in a special all red hair issue! Barbara! Miss Martian! Starfire! Blackfire! And Speedy! Actually, Speedy’s hair is more of an auburn. Also, what’s Wonder Girl’s secret? What is she doing with all that fruit? A discovery is made when she reveals her secret oranges!

JIMMY: This issue is the much-hyped (on the “Aw Yeah Podcast” with Art and Franco) “Secret Oranges” issue, where at least one Titan will have her “Secret Oranges” revealed. At the cost of some of the humor, I’ll explain the joke just in case it doesn’t translate well from speech to print–Secret Oranges are a play on Secret Origins. It was just revealed recently that Tiny Titans is winding down to a 50th issue finale, and Art and Franco are going to be replacing it with a Superman Family book. I’m not too keen on the Superman family, but I have loved Tiny Titans from the very beginning, so I’m hoping that Art and Franco finish as strong as they started. ZACH: The boy who sent the non-comic world into frenzy finally has his new Spidey costume and is ready to carry on the legacy that Peter Parker left. Bendis has written a perfectly paced story so far and Pichelli’s art has been nothing less than jaw dropping. GEORGE: Schism surprisingly revitalized the X-Books more than I thought possible. Both Wolverine and the X-Men and Uncanny X-Men have opened ambitiously and followed through. Uncanny X-Men #5 begins a new arc, coming after a heady one-and-done issue written from a Phalanx member’s POV that exemplified writer Kieron Gillen’s capacity for doing strange ideas right. I’m less looking forward to Greg Land coming back to Uncanny, but we can’t have it all. GEORGE: Rick Remender is rapidly becoming my favorite writer at Marvel, and Venom is a big reason why. Uncanny X-Force might be flashier and ambitious, but Venom is damn good reading. It was inevitable that Flash Thompson would go rogue with the Venom suit, but who saw him doing the buddy road-trip thing with Jack O’Lantern? The Halloween-themed ne’er-do-well is so gleefully villainous and plays beautifully off the troubled heroism of Flash Thompson. Red Hulk is getting added to the mix soon, as is Toxin, so the story’s going to get hectic real quick. Jump on board soon!