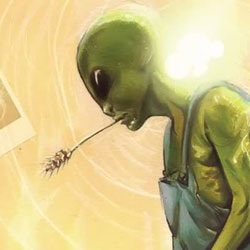 Our group of recovering abductees is still on the run from the Men in White and pinned down inside an alien fetish club. And if those last three words don’t grab your attention nothing else I say will. Previously in Xenoholics: After aliens created crop circles in the middle of New York City, the group of six continues looking for answers about the disappearance of Professor Campbell. The clues leads Bob and the rest of the Xenoholics to an alien sex club where the guns-blazing Men in White cut their search short.

ALL IS NOT WHAT IT SEEMS

Just as in issue two, Xenoholics #3 opens up with a quick blurb about the back-story of a member of the Xenoholics group. This week’s focus is on Ginger, the punk rock band singer who figures out that her abduction story is nothing more than hallucinations from her partying. Throughout the last two issues Joshua Williamson has included character stories and other dialogue to let us know only one person in the group was abducted, and the rest are lying.

As the group makes their escape from the club, Ginger and Kyle, a reporter posing in the group to write a story, are slowed down and seemingly caught by the Men in White, but are saved by an electric blast from an alien gun. During the fight scene that ensues, there is more dialogue that deepens and twists the plot even more. The aliens declare that the Xenoholics are under their protection, a Man in White calls an alien a traitor, an alien tells Ginger and Kyle that a member of the group “might be the key” and then leaves saying that “the professor is gone” and not to “worry about him.”

Once the group is together again, they decide to head up into the mountains where Mavin has a cabin they can use while figuring out what to do next. As the six are crammed in the car and heading up to the mountains, the car inexplicably shuts off, and a helicopter flood shines down, as the ever persistent Men in White detain them all for good this time. And for one final twist – the leader of the Men in White enters the room and is none-other-than famous alien abductee Xander Hall.

In this world of alien conspiracies with humor mixed in, the right art type is a must, and Seth Damoose has been nailing it. His characterizations and facial expressions all play up the tone and increase the enjoyment for this book. What is great about Damoose’s art is that there is just as much detail in a quick, small panel as there is in a two-page spread. As Williamson keeps growing the story, I know that Damoose will keep the readers entertained with the visuals as well.

BOTTOM LINE: WHO DOESN’T LIKE A GOOD ALIEN STORY?

The initial premise of people coming together to help each other through their post-abduction lives had me interested enough to pick up the first issue. From there the story has expanded to cover-up stories and secrets from seemingly everyone involved. Williamson has been dropping hints throughout the issues on what is actually happening but never enough so you know the whole story. I’m excited to find out where this first arc is heading, and how they will continue the story after that. Xenoholics #3 from the Shadowline imprint of Image Comics was another fun read and earns 4.5 out of 5 stars.