The Black Knight is struggling to maintain control. Even in death, the Ebony Sword controls him as it brings Dane Whitman back to life! Find out more in Black Knight: Curse of the Ebony Blade #2 by Marvel Comics! 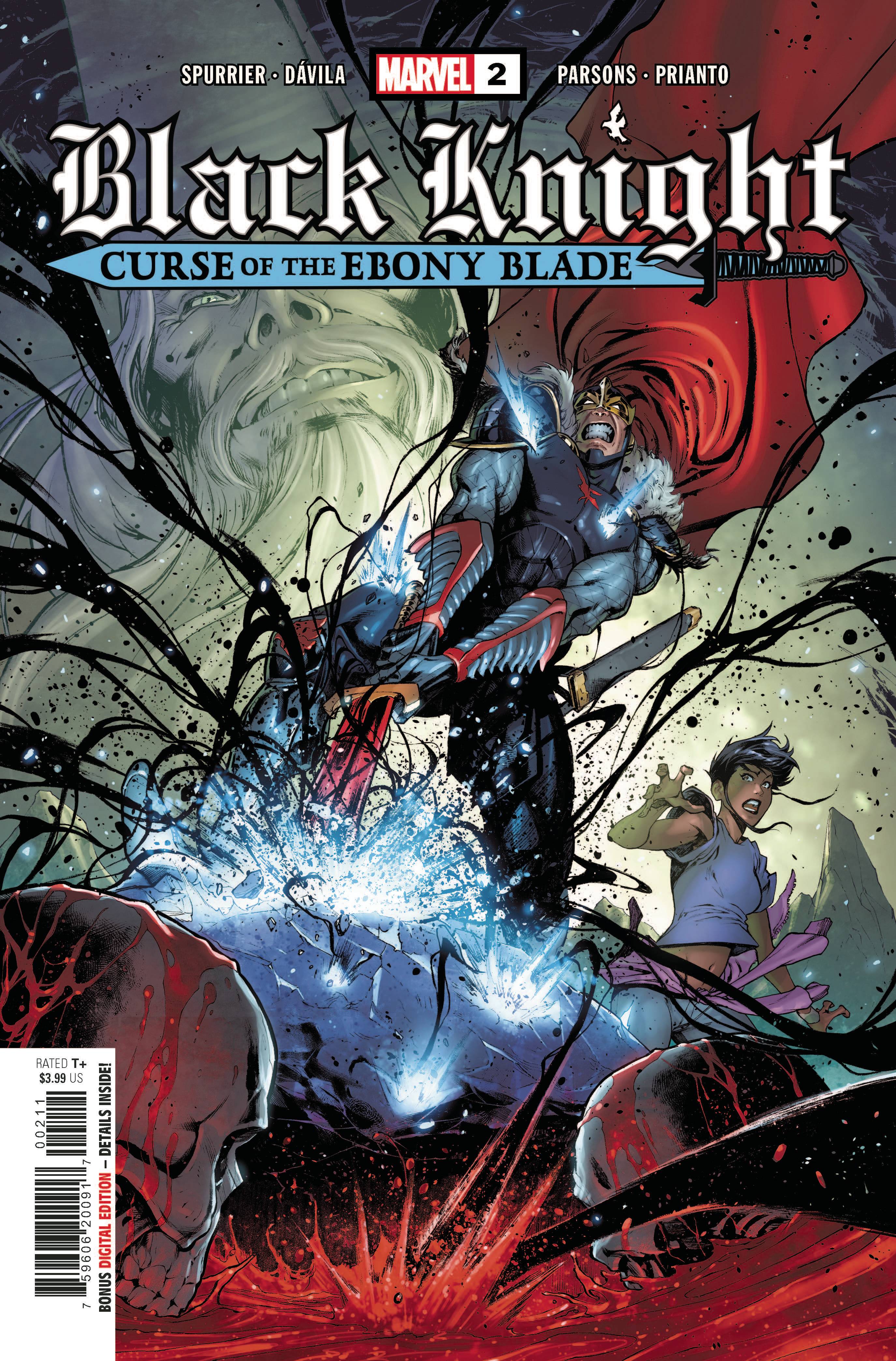 Previously in Black Knight: Dane Whitman is struggling being the Black Knight and resorting to online computer programs to replace therapy. When the Avengers call him, Dane is expecting them to want his company. But rather they call him for the power of the Ebony Blade. This is expounded when he is suddenly stabbed by a man with a magical dagger that kills him. When his body is returned to his home, the Ebony Blade resurrects him much to the surprise of his guest, Miss Jacks!

BACK FROM THE DEAD

Dane Whitman has been struggling to keep his sanity as he fights to ebony blade. After being resurrected, he looks for mentorship through the ghost of the first Black Knight, Percy. Percy reveals that when Merlin was creating the Ebony Blade, he also created three other items, a staff, a chalice, and a shield. Percy wielded the blade and became the first Black Knight. However, their conversation is interrupted when Elsa Bloodstone shows up at his door, guns blazing! Elsa suspects Dane to be using a bloodstone to kill a bunch of historians.

Meanwhile, PhD Candidate Ms. Jacks returns to her mentor to try and process all she has seen with Dane Whitman. However, when she arrives, her mentor has been murdered! When she touches a body, she has a vision. Once the vision is complete, she runs to interrupt the fight between Elsa and Dane! She knows the true objective of Dane’s killer, to reunite the four weapons that Merlin created. And only one person would be crazy enough to do that, Mordred!

After a stellar first issue to this comic, we slow down the story a bit to give a lot of background lore for the plot. We learn about the origin of the Ebony Blade and these other dangerous objects. Then suddenly we have Elsa on our doorstep to start a fight scene. Her only purpose in the story so far was to introduce action in this comic book. I’m sure she has a bigger purpose, but we won’t find out about it until next issue. This comic is a good middle issue but doesn’t work as a standalone. It is a great natural extension of the first issue that presented a solid hook but doesn’t provide much excitement. It makes me think that the creative team may have been thinking of the larger trade paperback when writing this issue.

I wanted to see more of the emotional trauma of Dane Whitman. We spent a great deal of the first issue exploring what it means to be the Black Knight for him, and we get a glimpse when he freaks out about coming back to life. But once he began to talk to Percy, he hasn’t had time to process all this new information. Once we slowdown the pacing of the story, I think my interest is going to increase. But this lore dump and a rather quick/odd introduction to Elsa didn’t quite work for me.

I love the ideas presented in this series but I’m not quite certain the second installment works as a standalone. In the greater context of the story, this issue is needed but I was slightly disappointed. I did enjoy the art and loved the imagery of Percy and Merlin destroying a Starstone to make the ebony items. 3.5 out of 5 for this one and I’m still excited to check out the next issue.

This issue failed to explore Dane Whitman's psyche that was set up so perfectly in the first issue. However the ideas of the series are still there and still strong.