The Maestro has been defeated! Bruce Banner has been tricked, captured, and shot at by the Pantheon. But what will happen to the citizens of Dystopia? Find out in Maestro: War and Pax #4 by Marvel Comics! 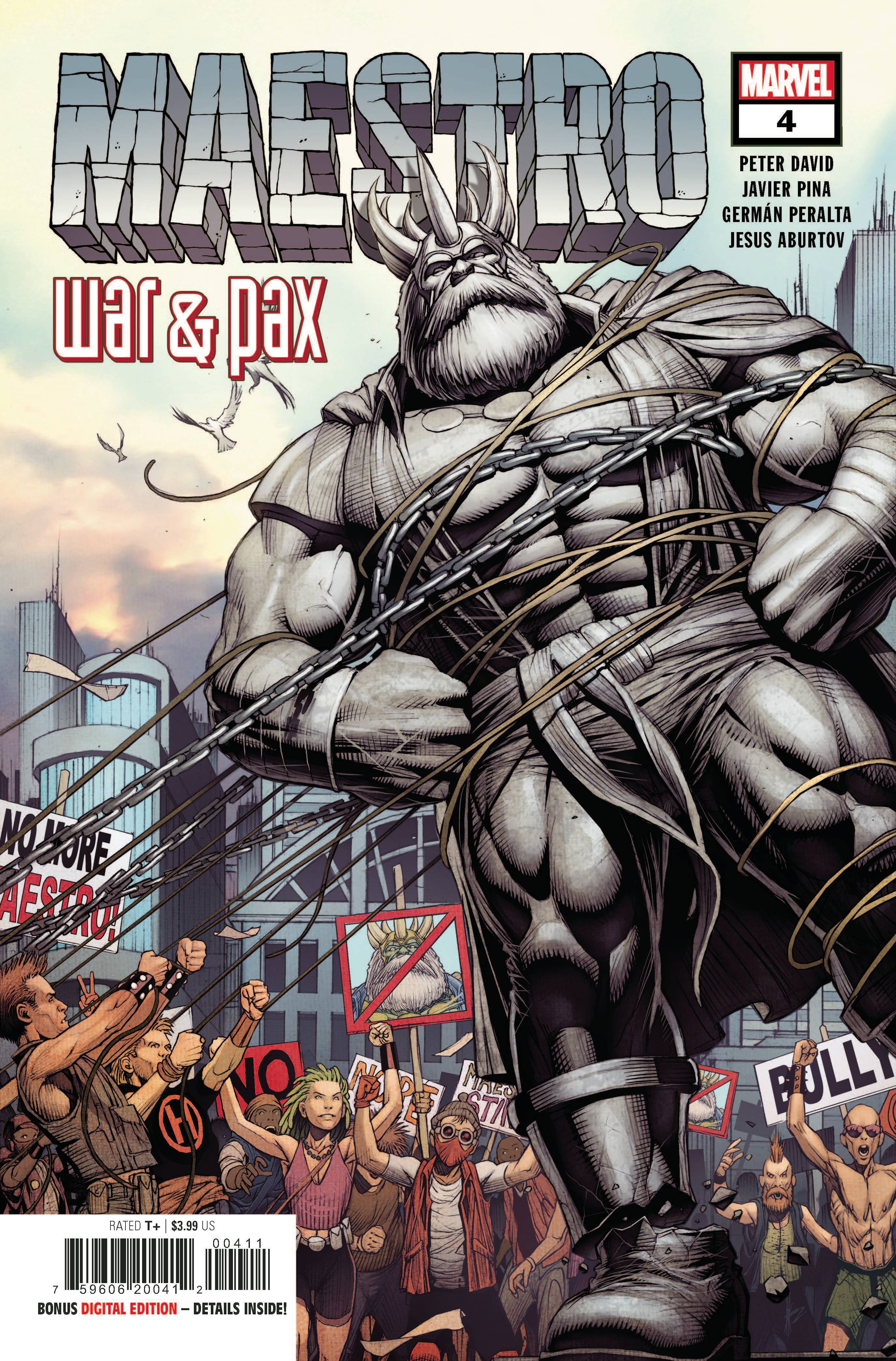 Previously in Maestro: Bruce Banner has woken up from stasis to see the world destroyed by war. Instead of returning to his superhero identity of the Hulk, he took on the new mantle as the tyrant Maestro! Ruling over the city of Dystopia, he sought to bring peace to the world with his PAX initiative. However, Doctor Doom and the Pantheon have created a plan to take the tyrant down before he became too powerful. And they succeeded.

Doctor Doom arrives in Dystopia claiming himself as the new Dictator, but the citizens here don’t receive him warmly. Instead of ruling by fear, Doctor Doom opts to peacefully enter Maestro’s home. The Pantheon cannot seem to kill Bruce even with a bullet in his head and heart. To trap him, they encase him in Duranium with just enough air to breathe. In Bruce’s head, he is visited by Sampson, and they talk about if he wants to die or not. However, the Maestro’s personality is stronger and wants to show the people of earth who is the strongest. Maestro reappears and breaks out of his Duranium prison easily. He forces the pantheon to shoot missiles at A.I.M. and kills Atlanta. As the missiles are in the air, Ulysses fires a second set of missiles right at their location. The pantheon perishes as Maestro escape before the missiles impact.

The story of Maestro’s descent into madness is fully cemented when even more of his old friends betray him. What caught my eye was M.O.D.O.K. said that A.I.M’s destruction will signal a new Avengers to take down Bruce Banner. This potentially signifies that some of Hulk’s old allies and enemies are still around and will reunite to fight Maestro. I don’t know how I feel about that theme because it just is a repeat of this arc. Maybe I am wrong, and the new Avengers team will be engaging but at the moment I’m not enthused. A much more interesting arc is going to be what Bruce Banner does with Doctor Doom and how Doctor Doom is going to handle things. Because if Maestro proves to be smarter and more ruthless than Doom then you know the world is in trouble.

I enjoyed this as a simple read. It was interesting to see the Pantheon deal with their decision-making process and what to do about the Hulk. I feel that the story was supposed to be a little deeper than what I got out of it. That the descent into tyranny reveals more about Hulk’s psychology. I didn’t get that this issue but maybe what we saw with Sampson and Hulk’s mother last issue with provide that depth. That and I didn’t connect to the death of Atlanta at all. 3.5 out of 5 for Maestro: War and Pax #4.

Maestro: War and Pax shows Bruce Banner's continually transformation to become a tyrant as more and more of his friends betray him.