By Christopher Rondeau on March 5, 2021 0 Comments

Paizo has been creating a ton of content recently. Today in TTRP Corner we look at the Lost Omens Ancestry Guide for Pathfinder 2e and see what new choices you have for your characters. 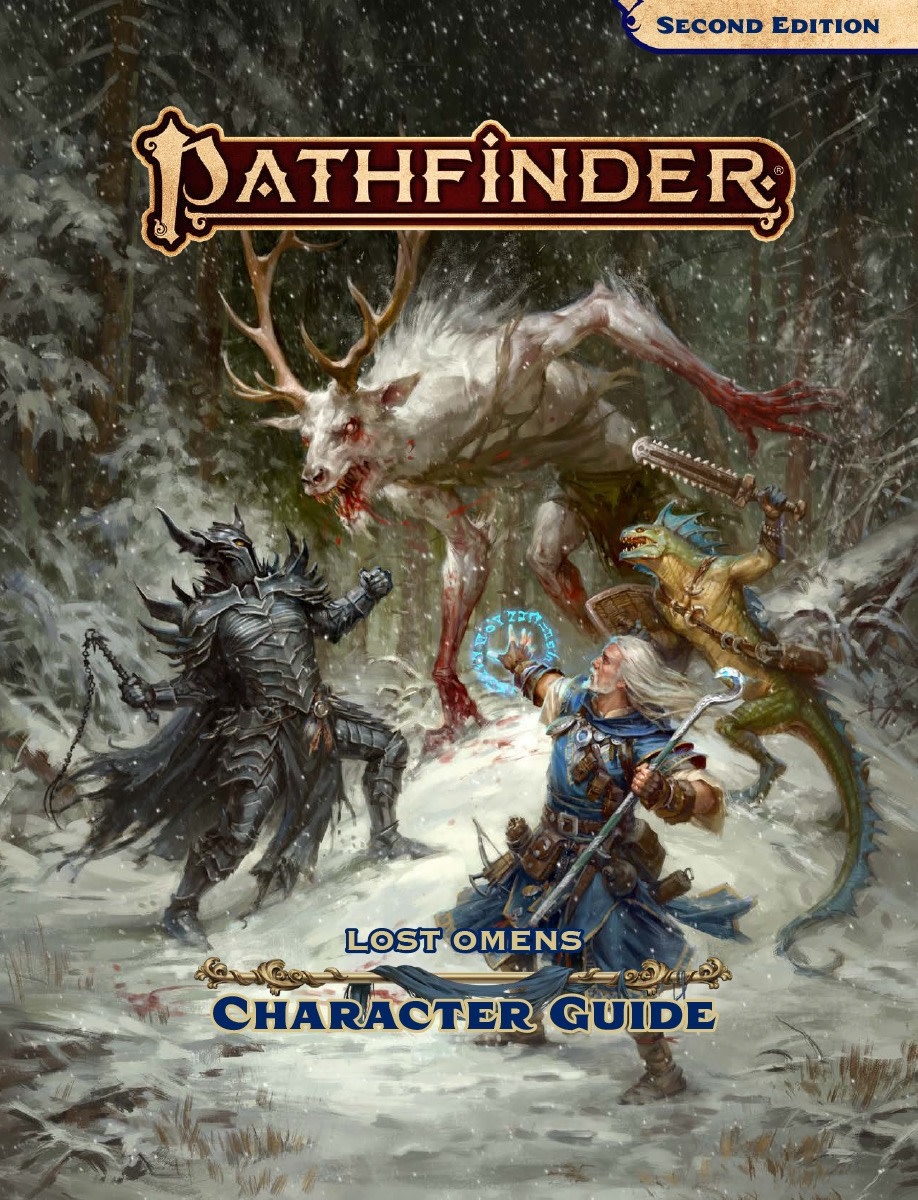 Paizo has made interesting design choices in their latest system. The decision on how they organized their feats and the separation from cultural and inherent features gives us the choice to make truly diverse characters with a ton of options. Very few dwarves are going to have the same stat and skills with each other and that level of flexibility allows you to make a truly unique character.

A NOTE ON VERSATILE HERITAGES

Pathfinder 2e has managed to give you an ancestry that can be further customized with a heritage. The best way to explain it is through an example. Your ancestry may be an “elf”, but your heritage may be an “Arctic Elf” which is someone who grew up in the tundra/frozen north. This allows a level of flexibility and to have stats that reflect where your character is from. After that, you gain ancestry feats that allow you further diversify your character. Some feats reflect your ability to use certain types of weapons or perhaps you know certain types of lore. A big pet-peeve of mind is when I used to make a dwarf and was forced to have knowledge of stone when it may not have applied to the character. Pathfinder 2e gives us the choice to pick only the features that fit.

Using this new system, Paizo created versatile heritages. These are heritages that every ancestry can take. Aasimar and Tieflings used to be their own thing but now they are a versatile heritage. I can then make an Orc Tiefling or a Lizardfolk Aasimar right within the rules system. This gives the character access to a new set of feats that can further diversifies the character. Personally, this makes the Dhampir heritage more engaging because my halfling vampire dreams can come true. 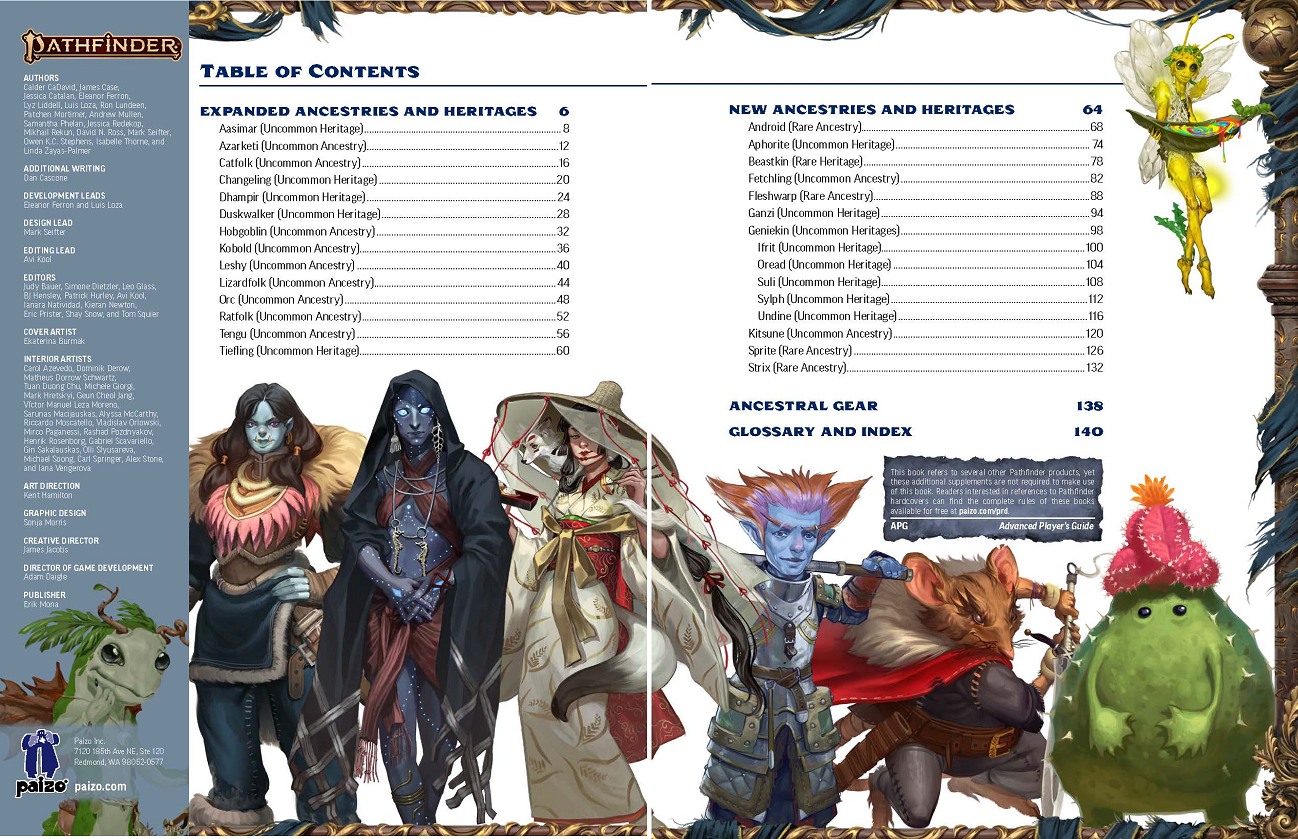 When the Advanced Players Guide came out, they brought in a handful of new ancestries and heritages. This allowed a lot of interesting new character concepts in what used to be a limited ancestry roster. These new concepts however did not give us very many choices for the new ancestries. This section expands on it quite well. I caught myself laughing that “Catfolk” had a “Catnap” feat that allowed them to take a ten-minute nap and gain some temporary HP.

Quite a few of these features seem to point towards the mystical. Tengu, or Birdfolk, can get an ability to pluck out a feather and do wind based magic with it. Which is contrasted by either choosing to learn that or learning to fly. Orcs can pick a feat that allows you to create a warmask that is associated with a magical tradition. On top of the new feats, a few of the races got new heritages. I never thought I would want to make a cactus heritage leshy, but here we are. 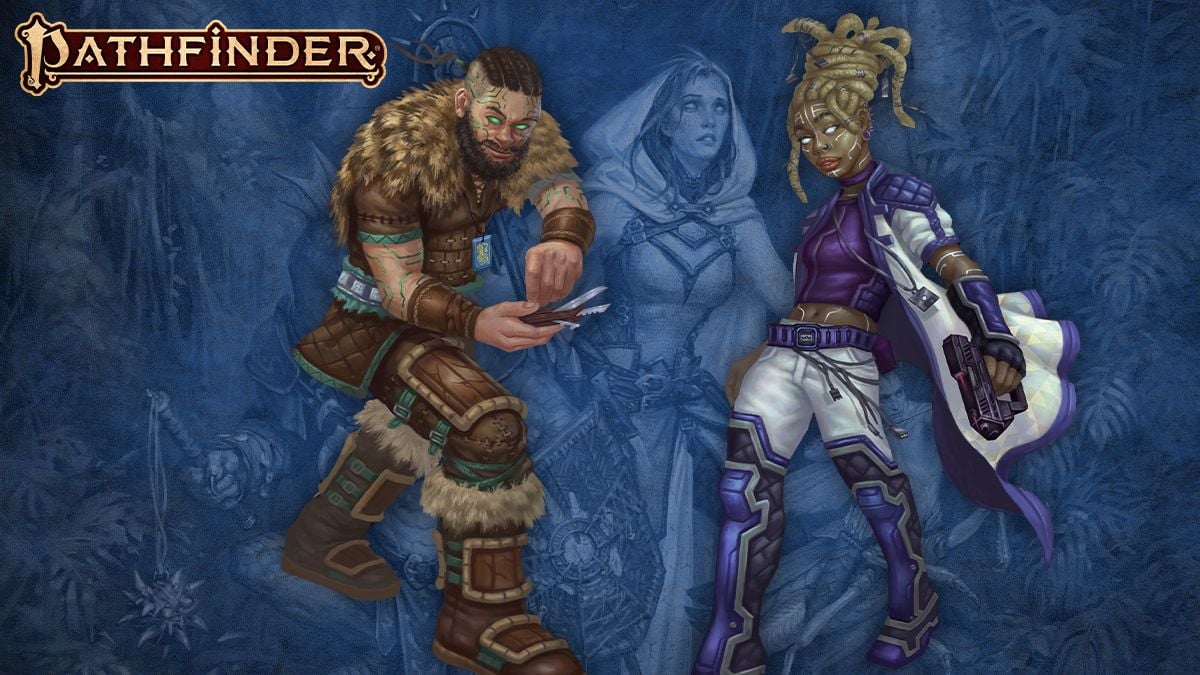 This book also introduces six new ancestries and nine new versatile heritages to the game. This includes their version of androids, geniekin, and sprites. Man, in my own GMing, people always ask me to play a sprite or a pixie and now there are rules specifically to create one. One of the Sprite’s features is to gain a corgi mount and I’m sure that is going to make a lot of players happy. I bet even my own daughter would decide to play the game just for that feature. On top of that, we get some more adult themed races with the “Fleshwarp” which are people who go through weird magic experiments to get a new form. They kind of remind me of Frankenstein based on some of the concept art. With abilities like “Gaping Flesh” and “Gripping Limbs”, I would never put them in a kids game.

When I first skimmed the book, I saw a picture of a catfolk with a fire on their tail. My first thought was “Charmander”, but my second thought was how elemental heritages could create some unique stories. Additionally, I think it allows you to make a very diverse and different character and celebrate individuality. Recently, there has been a lot of discussion about how we view race in our roleplaying games. When I see the separation from your culture from your species, I think we begin to fight against a lot of those negative themes. Then comes Advanced Players Guide that came out last year. Paizo portrayed races that would be considered monstrous and features them as cultured beings. Something that is equal to how we view humans. Paizo defied our expectations and presented them as cool, not savage.

This book takes those ideas that are already established and elevates them even further. Not only do we get more customization, but we also don’t inherently see racism built into the classes. We are presented with a rather scary race, the Fleshwarp. But they present them in this way.

“Locals might consider a fleshwarp their equal or friend, and take umbrage at outsiders who make a big deal out of the “monster” in their midst. Sentiment might turn quickly upon supernatural events or strange attacks, however, and, tragically, more than a few fleshwarps have been turned out of homes they’ve occupied for decades when faced with a misguided mob.” (91)

This doesn’t tell me that all Fleshwarps are evil but rather people have different interpretations about them, and they may be wrong. What an interesting change of pace and I appreciate the work that the Paizo team has done here. I think this is a step in the right direction. But I am always welcome to discussion on the topic.

I think this is a great book for people to pick up and read. Make your halfling genies or play an elemental infused android. I think this is a for sure pick up for your pathfinder 2e game and a study on game design. Check out the link here!