By Christopher Rondeau on February 25, 2021 2 Comments

Political intrigue continues in Monstress #32. Follow Maika Halfwolf as she handles the strife between Arcanics and Humans in this hit series by Image Comics! 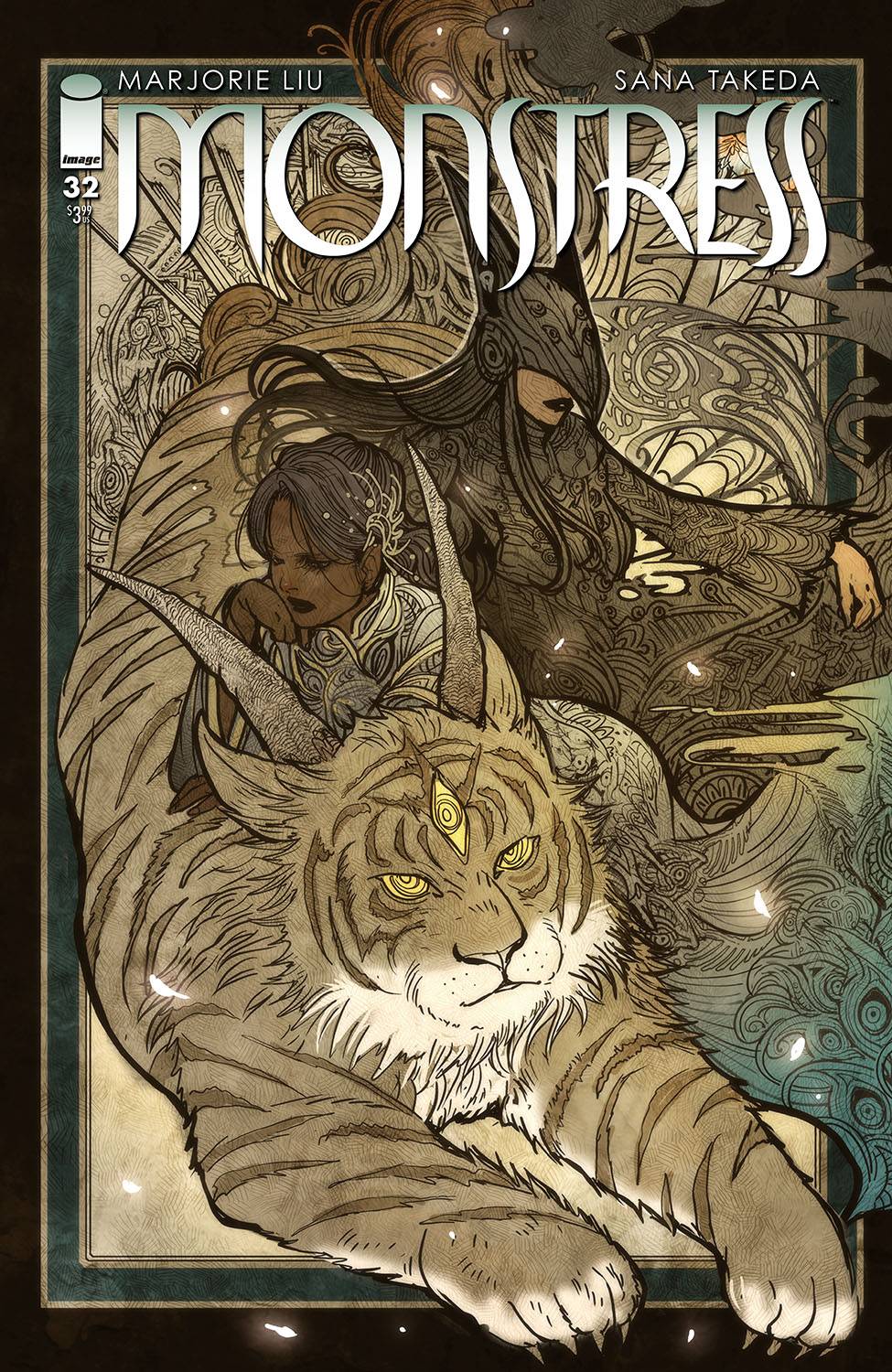 Previously in Monstress: Maika is adamantly opposed to the choices of the Warlord of the Dawn Court who happens to be Maika’s aunt. Warlord is also ambitious about the secrets Moriko Halfwolf, Maika’s mother, had and believes that Maika knows more then she lets on. These feelings are expounded when Tuya married the Warlord and Maika caught them in an act of intimacy.

Maika is confronted by the Warlord and Tuya about her trespassing on their quarters. After an almost violent argument, both Tuya and Maika are thrown in jail. In jail, Zinn, the creature within Maika, reveals itself to Tuya to show that it still has power. Maika is easily able to rescind it back to its body and it seems to have been a power move to intimidate Tuya. As they sleep in the night, Warlord comes to murder Maika but is unable to overpower Zinn. To make things more complicated, Maika uses the pendant on her neck to summon her grandmother, the Queen of Wolves.

Perhaps reviewing Monstress is never the best choice. The cast of characters and intrigue is hard to grasp in a simple synopsis of the comic. As I revise this review, if I didn’t have context, I wouldn’t have a dang clue why any of this matters. Instead of going into how this is connected to other aspects of the world, I think I am going to focus on the big theme here which is war and family. And rather, how war destroys families. This particular issue seems to be around Warlord wanting to know the weapon that Maika’s mother knew about. A weapon which is an instrument of war, led to an aunt trying to murder her niece. That is the most heart breaking part of it, when family tries to kill family. If you can swallow that theme, then you enter in sections of genocide and poorly treated refugees. It leads to a gritty world that really comes to life and I think that is the magic of the world building.

I think if you like content similar to Game of Thrones then this title is for you. The political intrigue, the world at war, and the characters slipping between what is morally correct is great content here. I love this series, the east Asian influences in the story, and the art is simply superb. For me, I think this issue is a 4.5 out of 5. A high recommendation from me for the right reader.

After the drama of last issue, Monstress #32 shows the aftermath and the emotions of all parties involved.