By Christopher Rondeau on February 11, 2021 0 Comments

Vox Machina are looking for their next job. Scouring the city of Westruun, the party finds a peculiar way of making money. Find out more in Critical Role: Vox Machina Origin #1 by Dark Horse Comics! 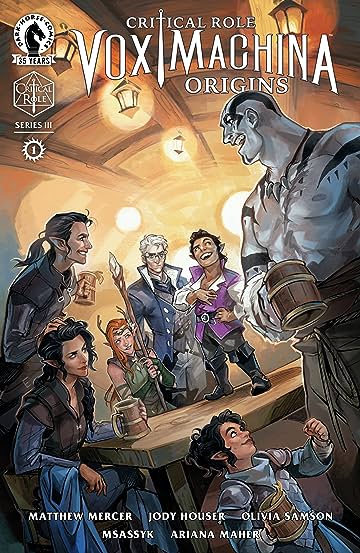 Previously in Critical Role: Based on the web show Critical Role, this comic takes us to what happened before the show began. Vox Machina is a group of good-intended mercenaries looking to make some coin. The party features a cast of seven people including twins Vex and Vax, gnome bard Scanlan, cleric Pike, Barbarian Grog, druid Keyleth, and gunslinger Percy. With this diverse group of people, prepare for shenanigans and adventures!

DON’T SPEND IT ALL IN ONE PLACE

Vox Machina arrives in Westruun to get paid for a job. With a large sack of gold, the group goes on a shopping spree and take part in all the city has to offer. Shortly, they run out of money and are looking for the next bit of work. The only job they can find is a mother looking for her son but since it isn’t a paid gig, only Keyleth takes it. Meanwhile, the rest of the crew find themselves being checked out by an underground fighting ring. Grog immediately jumps in and signs Vox Machina up for the fight. First event, Vox Machina verses the Goreshon’s Fist!

Critical Role has defied expectations and have taken tabletop web shows to new horizons. However, the main draw to the show is a group of voice actors having fun at the table. They voice their characters, crack jokes, and have a good time. That aspect of the show doesn’t translate to comic book form, so we are forced with just the plotline. The story is okay. There is nothing wrong with it but without the players playing the characters, the cast seems a little flat. The story lacks a solid theme that will carry it through the arc and while we get some foreshadowing, we don’t get any depth. The story features a several pages of the team getting money, spending money, and then not having money. Perhaps then there is going to be a theme about greed and Keyleth acts as a foil who does things for altruistic reasons. But right now, it just seems like a group of people spending money and getting into trouble. Which isn’t a bad thing, it just doesn’t have the charm it needs.

The story has a strong narrative arc and good ideas. Unfortunately, the depth of the web show doesn’t translate well to the comic book page. Without the voice actors using inflections to deliver these lines, the story feels a little flat. I think that this is a 3.5 out of 5 for me. This story has great art and a great plot, I just think it needs to work a little more about making the characters interesting.