The Hellions are back in action, but they must still recover a body for Orphan-Maker. They head to Nanny’s ship in possession by an anti-mutant group. Prepare for a fight in Hellions #8 by Marvel Comics! 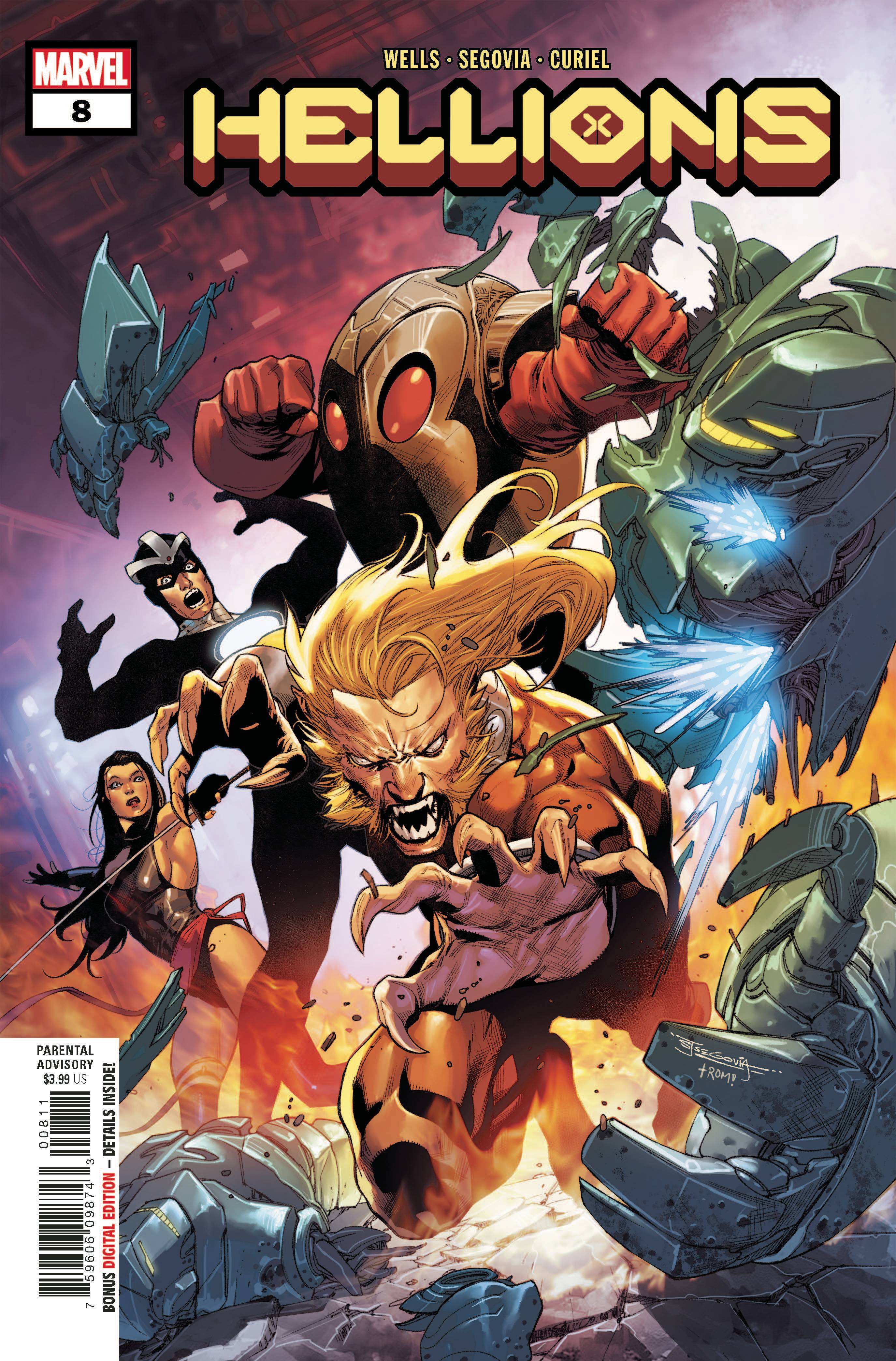 Previously on Hellions: The Hellions were wiped out after going on a suicide mission to Arakko. Half were killed in Arakko, the other half finished their mission but were killed by Mister Sinister. Now Sinister has resurrected his team but Nanny and Wildchild are a little odd. Since they died on Arakko the resurrection process seems to have made them more linear… more singular in purpose. Orphan-Maker has also returned but cannot rejoin the team until he gets a new containment suit. Unfortunately, they must recover Nanny’s ship in possession by Cameron Hodge and The Right.

AM I EVEN HUMAN?

The Hellions prepare to fight Cameron Hodge, but Nanny and Wild Child simply run past Hodge and straight to the Nanny’s ship. This leaves Psylocke, Havok, Greycrow, and Empath to fight Hodge’s robots. The fight goes poorly as Empath runs away and the others are overwhelmed. Even Empath is finally captured. However, Empath tries to use his powers on Hodge and realizes that this person is an android. This causes the robots to turn on Hodge and befriend the mutants. Nanny and Wildchild meanwhile reach the ship destroying everything in their way.

Psylocke has another objective though, she receives orders to kill the robots that Havok is currently befriending. As the robots called Havok friend, they are destroyed by a virus.

There is this interesting question about the androids and if they deserved a chance to live. The AI had the ability to learn and override their programing. This means that they would eventually become sentient and be able to make decisions. Greycrow and Psylocke both believe that this is murder and wrong but are following orders. They share a touching moment of deciding who in this moment was going to be the killer.

This is a nice parallel to whatever is going on with Nanny and Wildchild. Because they just have a linear focus. They are almost more robotic than their robotic enemies. What an odd comparison to try and make and I am looking forward to seeing how Orphan-Maker will be when he finally gets his suit.

This is my favorite issue in the Hellions run so far. It challenges the idea of humanity and is very gritty. With great action sequences and dynamic art, I think this series is on the upswing. We will see how these heroes are challenged by their crazy leader Mister Sinister in the upcoming issues as well as they try to establish their own opinions of right and wrong. 4.5 out of 5 from me. I enjoyed this but I admit that I could be reading too far into the story that they are presenting.

The issue raises up the age-old question of what is humane and what is not.