By Christopher Rondeau on January 7, 2021 0 Comments

Juggernaut and D-cel head to New Mexico to figure out what this profit Superhuman prison is. Will anything be able to stop the Unstoppable Juggernaut? Find out in Juggernaut #5 by Marvel Comics! 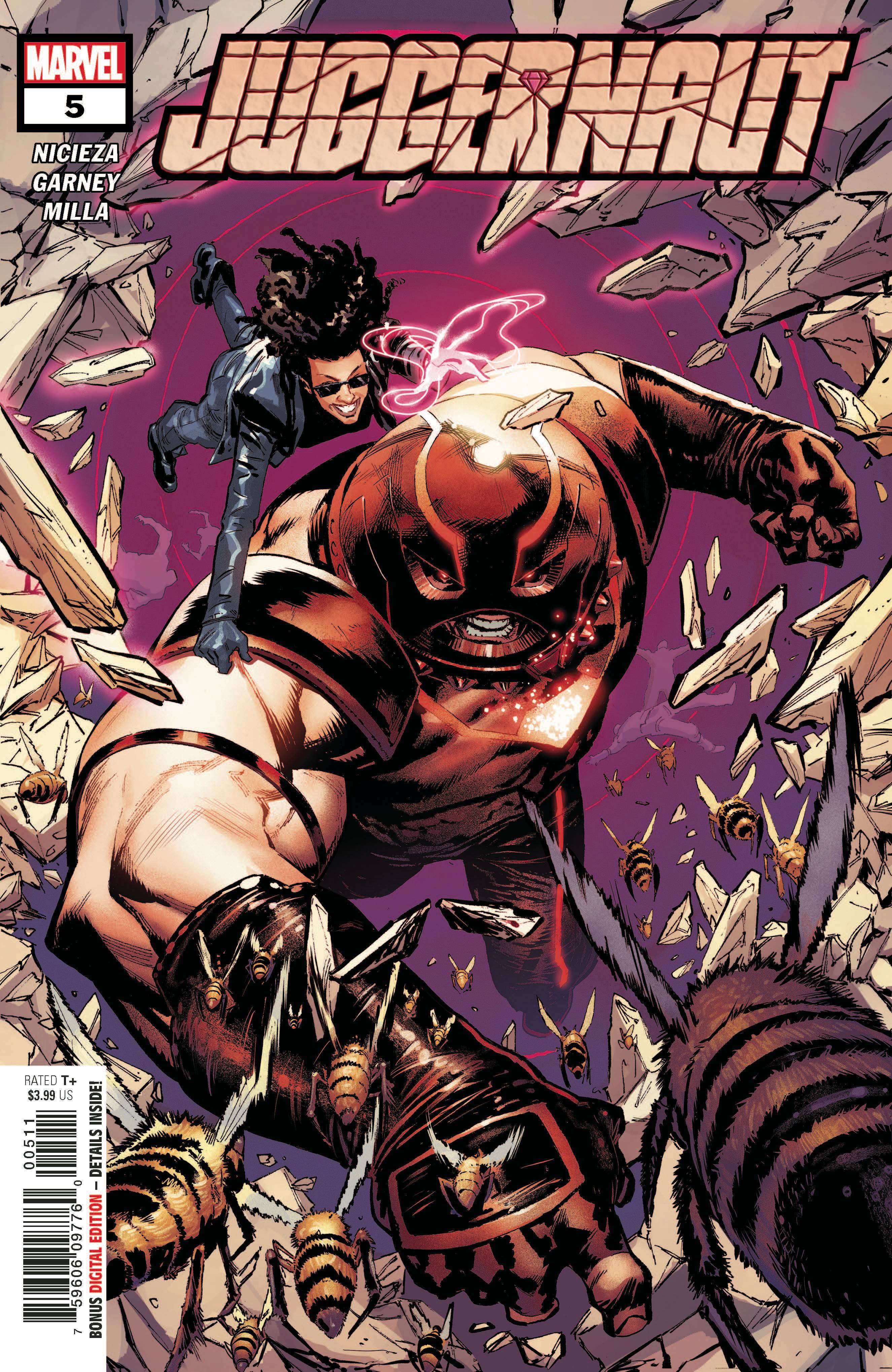 Previously in Juggernaut: After Cain Marko was in limbo, he opted to try and be on the right path. However, after he meets D-cel he is thrown right back into the world of superheroes and villains. D-cel is a powered human who has been targeted by a for-profit supervillain prison and Juggernaut is doing all he can to protect her.

The mystery of how D-cel got her powers is still unsolved. Is she a mutant or did she get her powers from a science experiment? Before Cain Marko runs face first into the for-profit prison, he contacts Krakoa about his new friend. At the prison, he arrives at a teleporter that takes him to a helicarrier and engages with the Warden. His guards have the DNA of Swarm and the Toad allowing them to control bees with a paralytic sting. D-cel runs in to save him but they are outnumbered. In a touching moment, Juggernaut asks D-cel to invoke Asylum on Krakoa which reveals that she is a mutant. They have a touching farewell as D-cel goes through the gate to be part of the nation of mutants. Afterwords, Juggernaut meets up with Arnim Zola, Quicksand, and Primus and asks them to work together.

When D-Cel was younger, she was in a car accident that took her family. She convinced herself that she was not a mutant because if she was, then she would then admit that she is personally responsible for their death. This came out of left field! I did not see this thing coming at all! I knew we were going to have to resolve this mutant vs science experiment question, but I did not expect that she was repressing a traumatic memory. This changes the entire arc. D-Cel had Juggernaut fight the Hulk to bring him to a meeting. A meeting that involved the victims of Hulk who have lost loved ones. Now we know the motivation. And it is a crazy and cool thing to watch and reflect on.

This is a great final issue and wraps everything up nicely. I did not think I was going to be interested in watching a redemption arc for Juggernaut. But his relationship with D-cel was incredibly riveting and beautifully written. On top of that Juggernaut is an incredible figure on a comic page. With the red accents and his giant physique, he is terrifying. Yet in this comic we see that he is also soft and loving. Great concluding issue.

I do not know if we are going to see Juggernaut, the hero, in another comic book. With everything going on with Krakoa, I do not see what the character can do within the X-Men universe. However, having him join the larger Marvel universe could allow him to truly shine. I believe he was also with the Savage Avengers run as well. This book is a surprising 5 out of 5 for me. For me, there is no such thing as a perfect comic book. However, this story was engaging and caught me off guard. I cannot wait to see what they do with the character.