By Christopher Rondeau on November 2, 2020 0 Comments

Anne Bonny and Mary Read are caught in the middle of a battle between the British Crown and Captain Jack’s crew! Find out if they can muster the courage to save their Captain in A Man Among Ye #3 by Image Comics! 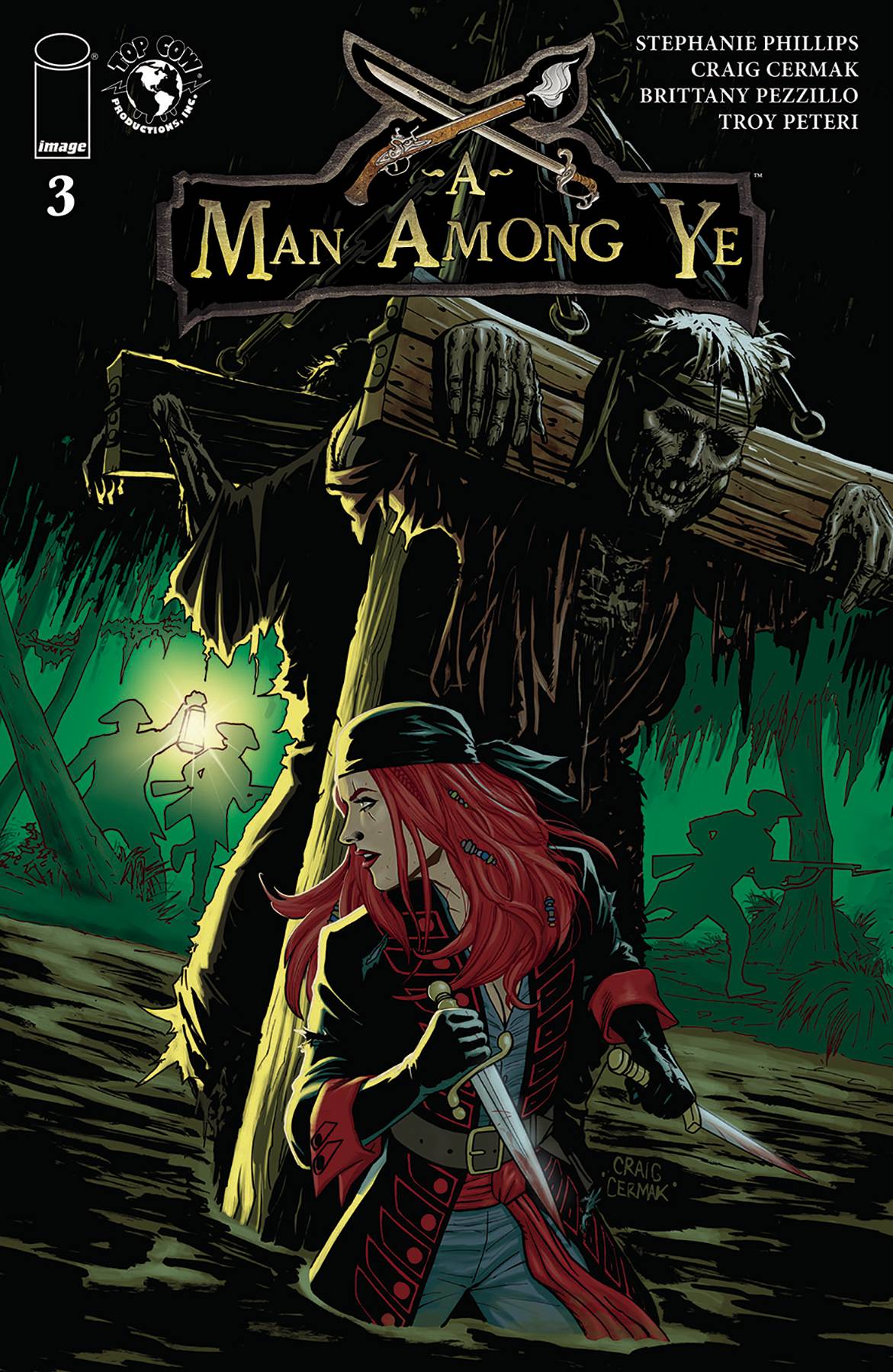 Previously in A Man Among Ye: Come check out the adventures on the high sea. Anne Bonny and Mary Read  are a part of Captain “Calico Jack” Rackham’s crew. However after his crew commits mutiny, Anne and Mary need to figure out a way to save Captain Jack! Come check out this comic book featuring historical pirates who become legends in their own right.

Anne and Mary are trying to steal a boat, but the boat they choose has another thief aboard. While Anne engages in swordplay against the other thieves, their fight unwillingly attracts attention. The two pairs temporarily form an alliance and are able to steal the boat and get away! After escaping, Anne Bonny declares herself captain to Mary and new shipmates, Jane Castor and her servant. Her position is solidified when Mary is thrown overboard in a storm and Anne selflessly jumps in to save her.

Meanwhile on Nassau, Rackham’s crew turn him in to the authorities. However, he finds himself in the meeting with Pirate Hunter Woodes Rodgers and fellow pirate Charles Vane. Rodgers then begins to question Jack about Anne Bonny.

Anne Bonny is an extremely engaging character thus far and she outshines the rest of her cast in this issue. She is so compelling that it makes everyone look flat. Which is rather unfortunate because there is a lot of potential for the other characters. This problem lies with Anne being extremely headstrong while everyone else tries to take a more strategic or diplomatic approach. Our eyes are going to be attracted to action and Anne is full of it. The creative team is going to have to work hard to bring some of these other characters to the forefront.

The theme of this arc seems to be loyalty. Anne is loyal to her Captain and we are beginning to see the crew becoming loyal to her. This is a middle issue, so we are not going to see a conclusion to the theme yet but the comic does a good job continuing the idea. Additionally, the best thing about the comic is the art is riveting. I love seeing Anne Bonny jump off the page in all her scenes and watching the lightning strike in the background. This book is visually stunning.

I like Anne and her willingness to get things done but I don’t know if that is enough to hold the series. The supporting characters are going to have to support the book for the title to continue to grasp my interest. It is like a good heist story. The best part of the heist novel is the crew coming together to enact a plan. Hopefully, this crew can come together to do something amazing for this title! 3.5 out of 5 for me. Looking forward to the next issue and cautiously optimistic.

Anne and Mary must find a way to save Captain Jack from his mutinous crew.