The Champions of Krakoa have been chosen and their swords are sharpened for battle! What does prophecy have in store for mutantkind! Find out in the X of Swords: Stasis #1 by Marvel Comics! 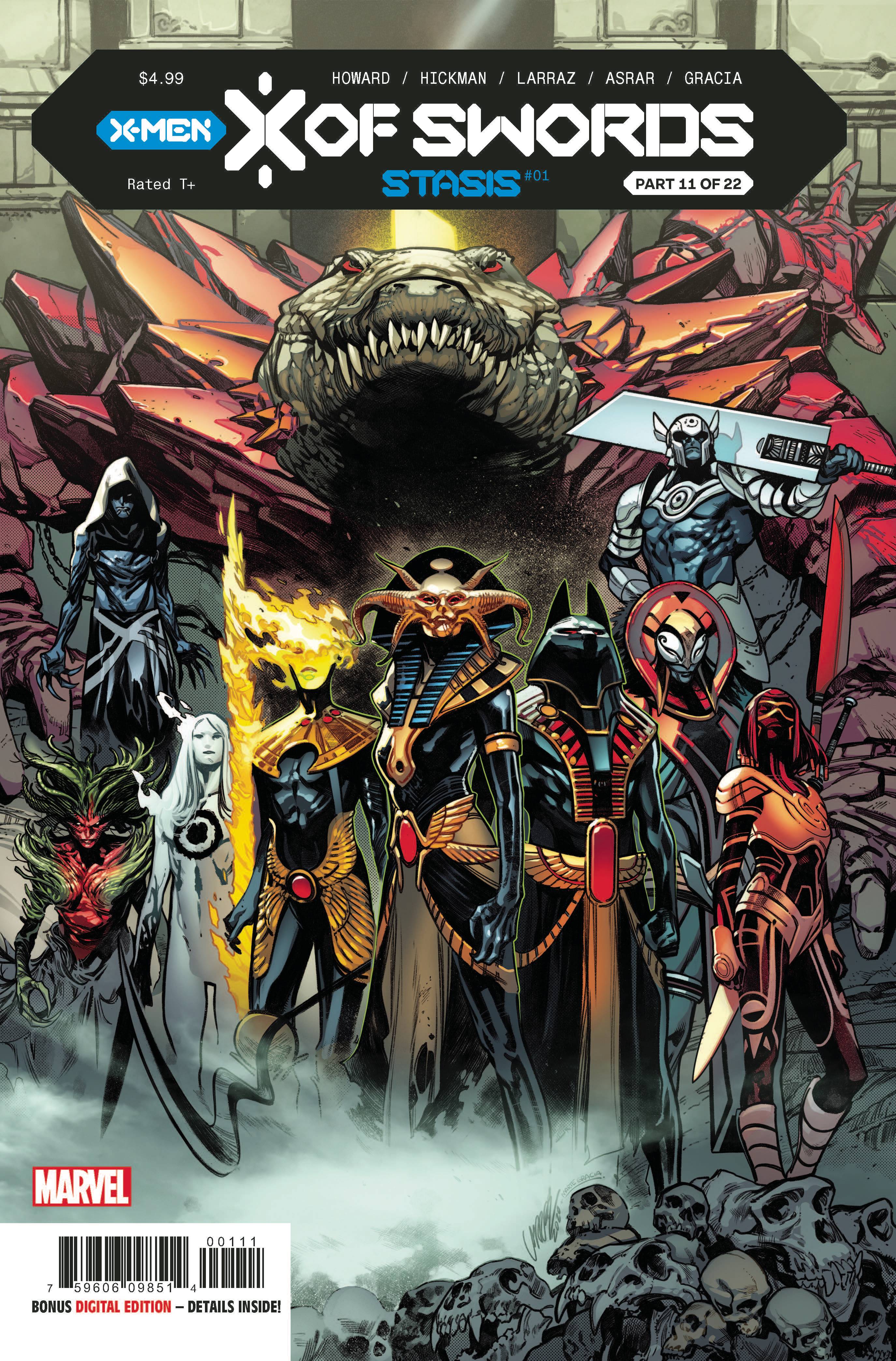 Previously on X of Swords: The Contest of Swords calls for champions of Krakoa to wage battle against the champions of Arakko. Chosen by prophecy, the mutants Wolverine and Storm went to great lengths to get their weapons while Magik prepares Cypher for battle. Cable rushes home after realizing he is a champion while Betsy and Brian Baddock set aside their differences for the sake of the tournament. Gorgon has taken his position with his two swords and Apocalypse recovered from his wounds to lead this ragtag crew.

THE CHAMPIONS OF ARAKKO

Nine Champions and ten swords gather together to travel to the Starlight Citadel. Led by Apocalypse, they prepare themselves for a battle that they are unlikely to survive. Meanwhile, the Champions of Arakko are chosen to fight for Amenth. Besides War, Summoner, Solem, Death, and Annihilation; five more champions are chosen. The White Sword is recruited despite being an enemy of the Horseman and Isca the Unbeaten joins freely. Pogg Ur-Pogg is paid to fight, Bel the Blood Moon is looking for another battle, and Redroot is pushed to go by Arakko itself.

When the champions of Krakoa arrive, they expect a fight because no one knows the rules of the contest. They are met by Saturnyne who gives them rooms to prepare for a feast. Each member is given a card that assumingly gives them a glimpse into their future but Apocalypse card angers him. He runs off to confront Saturnyne and is led by her to her next meeting. His card is the lover card with an image of him holding his wife. Coincidentally, Saturyne guest is a woman wearing the Mask of Annihilation who takes it off to reveal the wearer to be Genesis.

RAMPING UP THE TENSION

X of Swords foreshadowed from the beginning that Genesis was going to return and I could see the hints that Genesis would take on the mantle of Annihilation in retrospect. This comic for me, just revealed more or less what I already knew. Which is important for the event to touch on but I thought it was a little lacking in new material. I guess the montage of recruiting the Champions of Arakko did not interest me because I don’t know much about these characters. I don’t have the same connection to these characters as I do Storm or Wolverine. This issue was a really engaging information dump for people who aren’t reading the entire arc. It connects all the issues thus far together nicely. However, since I have been reading the entire event, I felt a little unsatisfied.

Also, why do the X-Men only have nine champions? Gorgon gets two swords? Certainly there must be a reason for this and I wonder if a tenth champion is going to show up. Regardless, I do have to say the imagery of the Champions of Arakko is very vivid and imaginative. I hope that they continue to take on these monstrous creatures and create a stark contrast between the Champions of Krakoa.

This issue definitely felt like it was collecting the information of all the other comics. When you have ten other chapters split between eight or so different titles it is necessary to do so. On top of that, this issue still provides new information and is necessary to read to get the full story. Considering all that, this is a 4 out of 5 from me. Good story, good intrigue, and needed for the arc, but perhaps a little predictable if you are following the series as a whole.

The Champions of Krakoa are preparing to enter the Contest of Swords.