They say a father can sway the future of their child. Half-man and half-Cotati, The Swordsman is certainly a complicated figure to the Celestial Messiah. Find out more in Lords of Empyre: Swordsman #1 by Marvel! 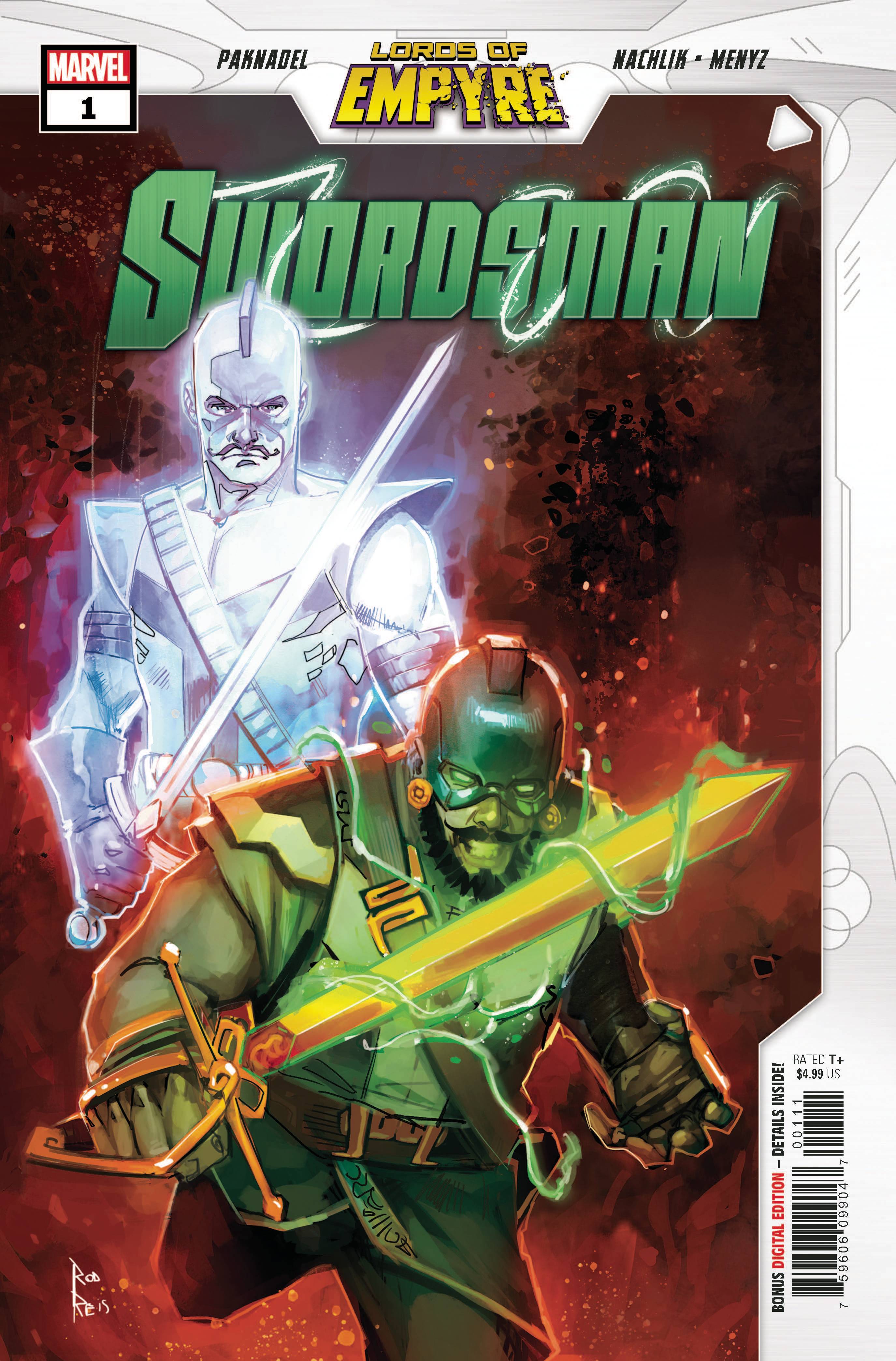 Previously on Lords of Empyre: The Cotati have been on the bad end of the Kree and Skrull empires wraith and are seeking justice. The only problem is that their justice involves exterminating all animal life! They uplift the Celestial Messiah, son of the revived Swordsman and Mantis, to lead them. Will Earth be able to stop the Celestial Messiah and convince the Kree/Skrull empire to not destroy the planet?!

The Swordsman can feel his half human side polluting himself and he is constantly at war with his identity. He recruits his son to go back to where his corpse is but there is a group of men trying to cut down the Cotati that has grown from his grave. The Swordsman is angry and attempts to kill all the men but Quoi prevents them. As a piece of solace, Quoi gives the men a piece of Cotati medicine and the Swordsman heads to his old grave to be absorbed into the tree.

However, the humans decide that the gift wasn’t enough and they go back to attack the Swordsman’s grave and execute the plants. The Swordsman is forced out of his tree and sees the Cotati plants around him killed by the human’s actions and goes on a rampage. Quoi sees that the humans will not accept him as their Celestial Messiah and cements his perspective on the evil of humans. Quoi grows a new sword for his father and they prepare their assault on earth.

Throughout this issue, the Swordsman berates Quoi for being too kind. Mercy isn’t made for humans because of their evil and hypocritical nature. For a long time, Quoi disagrees and fights for the humans right to live. There is then a sudden shift. After the humans destroy the Swordsman’s grave which was an important location for the Cotati people; Quoi then agrees with his father’s anger. I see this shift as a kid trying to see eye to eye with his father on matters. Which is interesting since we saw him adamantly disagree with his mother. What an intriguing change in the Celestial Messiah as a character and a villain and I’m curious to see it resolve.

I have liked the aesthetic of the Empyre event because I find the Cotati visually engaging. Green, as the Cotati are colored, is a sign of life but it is interesting that Quoi is accented with purple which is a symbol of corruption. Seeing Quoi in his human, peach-skinned form, then ending the issue in his purple natural skin tone is incredibly informative of the antagonist. I can never tell if this is an active decision by the creative team at Marvel but it is still something I like reading into.

I had no real interest in Mantis, the Swordsman, and Quoi until this event. This issue has taken a villain turned hero (then villain again) and has given me something to latch on to. I am now connected and invested in what happens to both Quoi and the Swordsman in this event. Will they redeem themselves or are they going to stay the villain they are?! I can’t wait to find out! 4 out of 5 stars for Lords of Empyre: Swordsman #1

The relationship between the Swordsman and Quoi is explored in this one-shot! Come see why these characters have decided to wage war on all animal life!