By Christopher Rondeau on August 6, 2020 2 Comments

Fantomex is an escaped experiment from the Weapon Plus program that originally came from “The World”. Now we learn that The World has been around a very long time. Come check out Fantomex’s origin in GIANT-SIZE X-MEN: FANTOMEX #1 by Marvel! 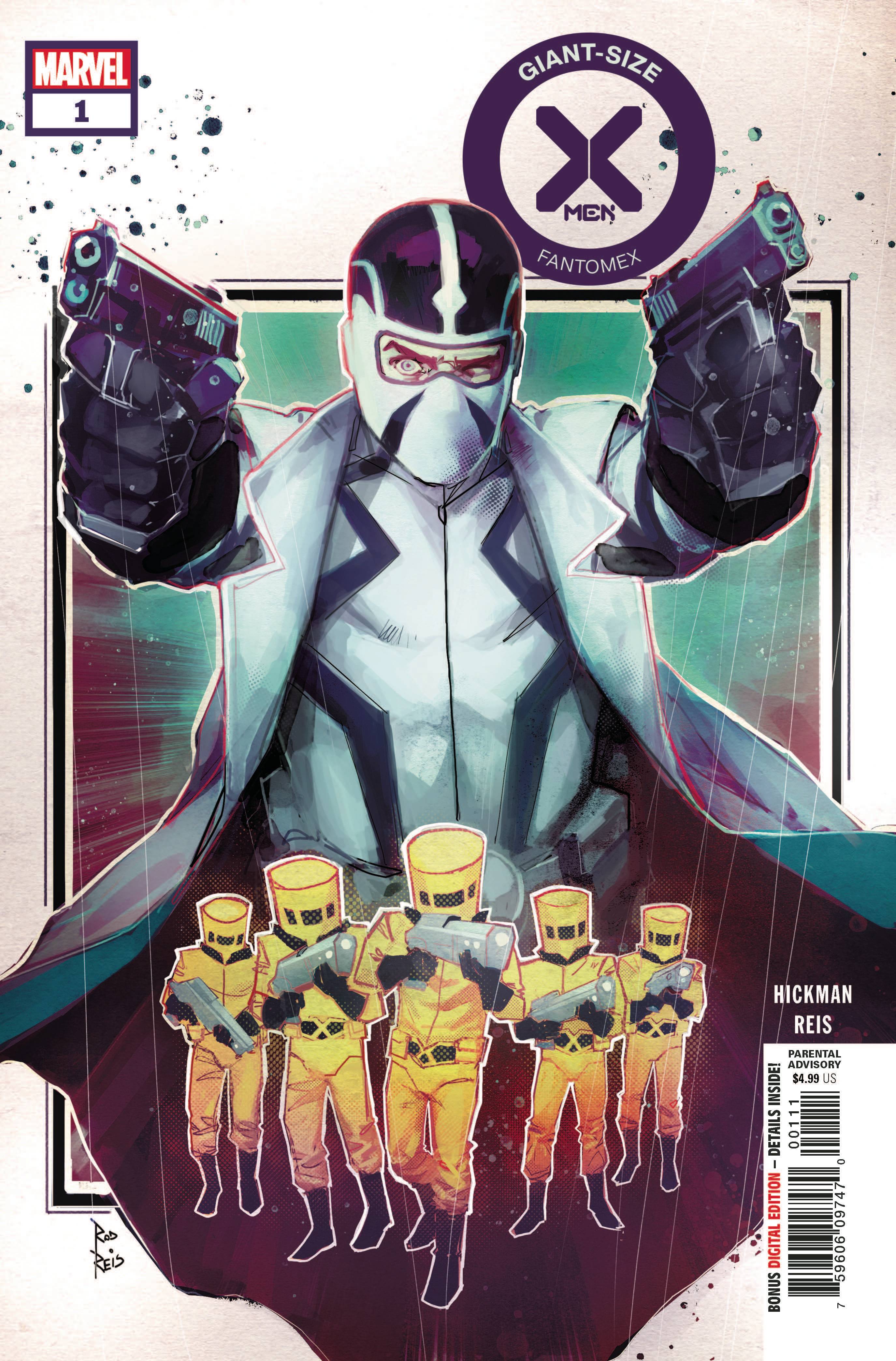 Recently in X-Men: Fantomex is a man who was created to be a killer but chose a different life instead. Created in “The World”, Fantomex was able to escape before he could be used as a weapon. But what would a notorious thief choose to come back to his place of origin over… and over… and over again.

The story begins with a scientist looking at two babies that have the exact same DNA, which is an anomaly. One is Fantomex but the other was supposedly killed. After his escape, Fantomex has returned to “The World” every ten years to try and talk to his “twin”. He initially recruits Nick Fury and the Howling Commandos to barge in. Ten years later recruits the Hellfire Club and ten years after that he recruits a new group called the Humonganauts. (With the heroes Mohawk Person and Emotipool… a literally man with emoji’s on his face.) Every time he shows up The World is more advanced and more dangerous and his twin doesn’t want to leave.

Another decade passes and Fantomex recruits Wolverine and Cyclops. As they fight through A.I.M. and other hazards, Fantomex meets his genealogy twin who seems to have gone insane and is unable to discern fiction from reality. Less than a decade after that, Fantomex is contacted by Storm who is dying. To help save her, he once again must take a group of mutants to “The World”. For the first time, it isn’t him prompting a group of people into this artificial world and he seems to do this with altruistic reasons. Storm, Fantomex, and some of the X-Men enter the world that is more distorted than ever.

There is a lot of information in this 30-page book and I had trouble unpacking the info about Fantomex and his unnamed twin. What is his twin’s role in The World and how much is he influencing the events of the X-Men world? Are we seeing a new major player in the mythos? I have no idea. I think this book forces you to try and make intelligent assumptions about what is going on. Instead of being told of the plot, we must look at what the characters are doing on the page, what is the narrative arc trying to tell us, and what is being emphasized through the art and writing. I love when a creative team puts in that hard work but I don’t know if I actually got the point. My assumption is that we are seeing someone with Fantomex abilities but not his training.

This seems to be a prelude for what is going on in the other X-Men comics and setting something up for the X-Men title to deal with. As a reader, I am excited to find out what happens next and see how the various teams will respond to this. This seems bigger than simply an X-Men problem and I wonder if we are going to get the Avengers or another team involved. I don’t know if I want another crossover event with the Empyre stuff coming out though. Hopefully this will just be something for the Krakoa mutant nation to deal with.

The art is insanely creative. The interpretation of The World and how it developed was well-drawn and colored. I can’t imagine what the conversation was like between Hickman and Reis. “Uh, I need a team of heroes that haven’t been in comics yet.” “How about a man who just has emojis on his face.” “YES USE THAT”. I loved the last page where we see Fantomex showing Storm and the X-Men to “The World” and seeing his arms spread to reveal the chaos behind him. What a stunning moment that makes me want to read the next issue!

BOTTOM LINE: A PRELUDE TO SOMETHING COOL

This story is going to lead to something amazing and it makes me want to check out the X-Men title again. I have been following X-Force but I admit I have been skipping the other titles and this comic makes me want to backtrack and check it out. It is a clever way to market this book and the universe as a whole. 4.5 out of 5 for Giant-Size X-Men: Fantomex #1.