Robyn has been on the run in the big apple for a crime she didn’t commit. She is away from her home, her friends, and is now being hunted by these robots under control by the mayor of New York. Find out if she can stay sane in ROBYN HOOD: JUSTICE #1 by Zenescope Entertainment. 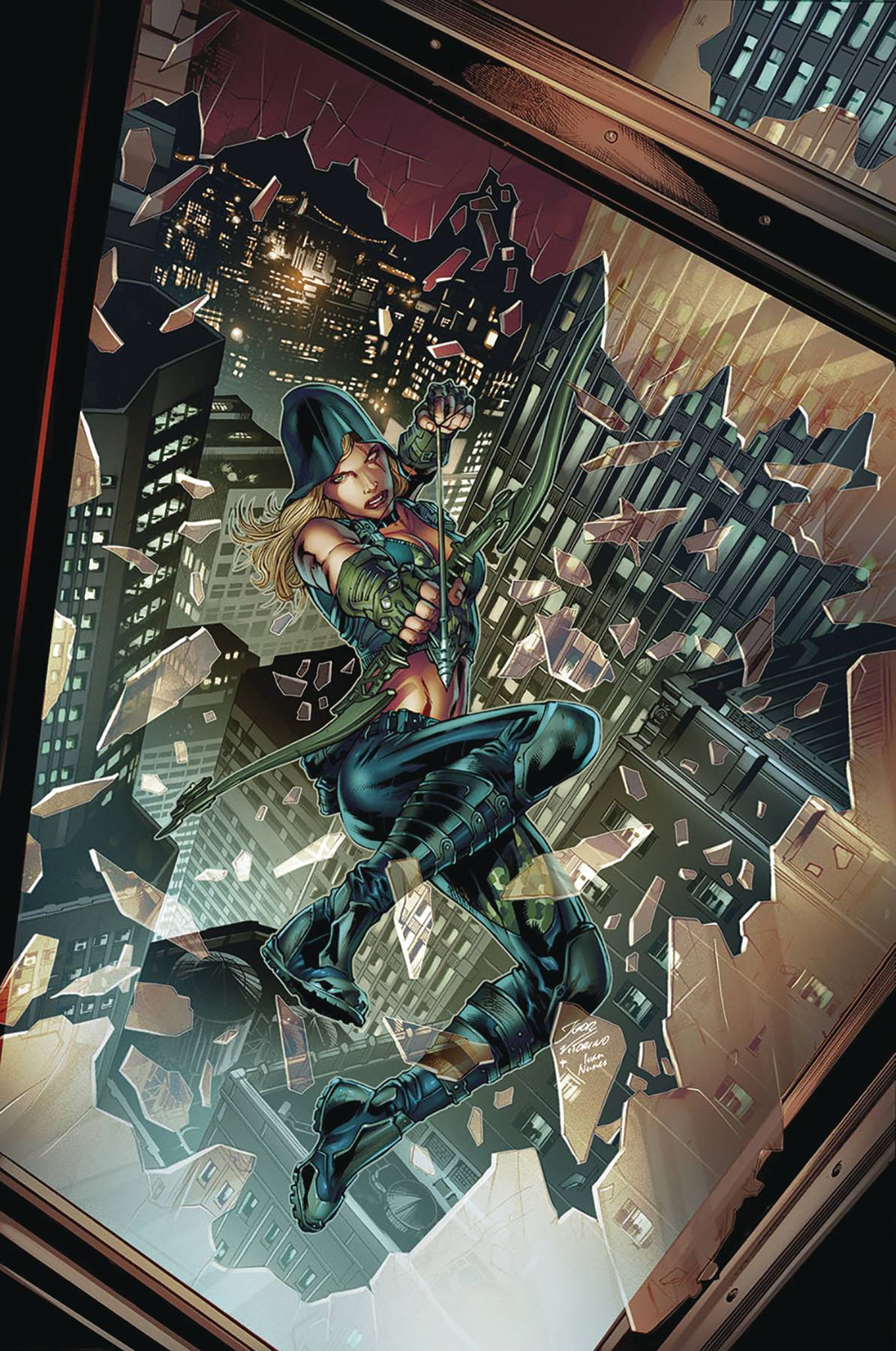 Previously on Robyn Hood: Robyn is still an outlaw vigilante and is unable to even show her face in public. With “Mayor Nyguen’s War on Weirdness” in full force with an army of high-tech robots, it is difficult to even walk around. Robyn and Emmett have spent thirty-one days in a hotel room unable to even walk out the door. Eventually they have to come up with a plan, with or without their allies.

Robyn and Emmett turn on the news to see that Mayor Nyguen has upgraded her robots to have facial recognition. She uses this as propaganda on how she can keep the city safe. As she leaves the press conference, she sends one of the robots to chase after a criminal who is able to make an arrest with a lot of property damage. Robyn gets cabin fever and decides to make a pizza run and as she’s walking out she stops a man from being shot. This brings the attention to one of the new police robots and they engage in a fight. She is able to save herself with an EMP arrow and leaves before the cops can engage with her. She returns to see Emmett possessed by Synapse!

A STORY OF ISOLATION

Robyn’s emotions of being stuck in a hotel for thirty days really hits hard. Except for grocery runs, I personally haven’t left home very much since the pandemic and the images of dirty dishes and unwashed clothes felt like a personal attack! Then there is the storyline of the mayor targeting a special type of person also seems to be a little on point. I don’t know when this was written/outlined but this issue begins to be a scarily accurate representation of our reality. Something I applaud if it is intentional but it leaves me a little uncomfortable.

Robyn is an engaging protagonist and she has a great visual aesthetic. Everytime she strikes an action pose to shoot her bow; it is incredibly dynamic and shows her courage. The writing of the inner monologue of Robyn is my favorite part of the story. Seeing how she thinks and acts in that vivid green thought box keeps me grounded in the story. The story is a little slow at the moment but I remain interested because of Robyn trying to sort through her terrible situation. Good work from the creative team here!

BOTTOM LINE: IT WAS GOOD

This comic book seems highly applicable to the current times and approaches it intellectually. The protagonist is the best part and leads to a character driven story. While the plot line isn’t original and the character is a rip off of Robin Hood; the creative team still does a great job keeping you enthralled in the character. 4 out of 5 stars for Robyn Hood: Justice #1.

Robyn Hood has been accused of a crime she did not commit. She has to deal with the isolation of hiding from the police, the fear of advanced robots, and must still try to clear her name!
Babisu Kourtis Chuck Dixon Juan Manuel Rodriguez Kellie Supplee Review robyn hood Robyn Hood: Justice Taylor Esposito Zenescope Entertainment
Share. Twitter Facebook Pinterest LinkedIn Tumblr Email
Previous ArticleEmpyre #3 Review
Next Article Critical Hit #564: The Courtyard of the High Shrubbery (VS06-114)