DIE is back with a new story arc! The party is still split with half the heroes trying to rule an empire and the other half on the run from it. Will they be able to get on the same page so they can return home? Find out in DIE #11 by Image Comics! 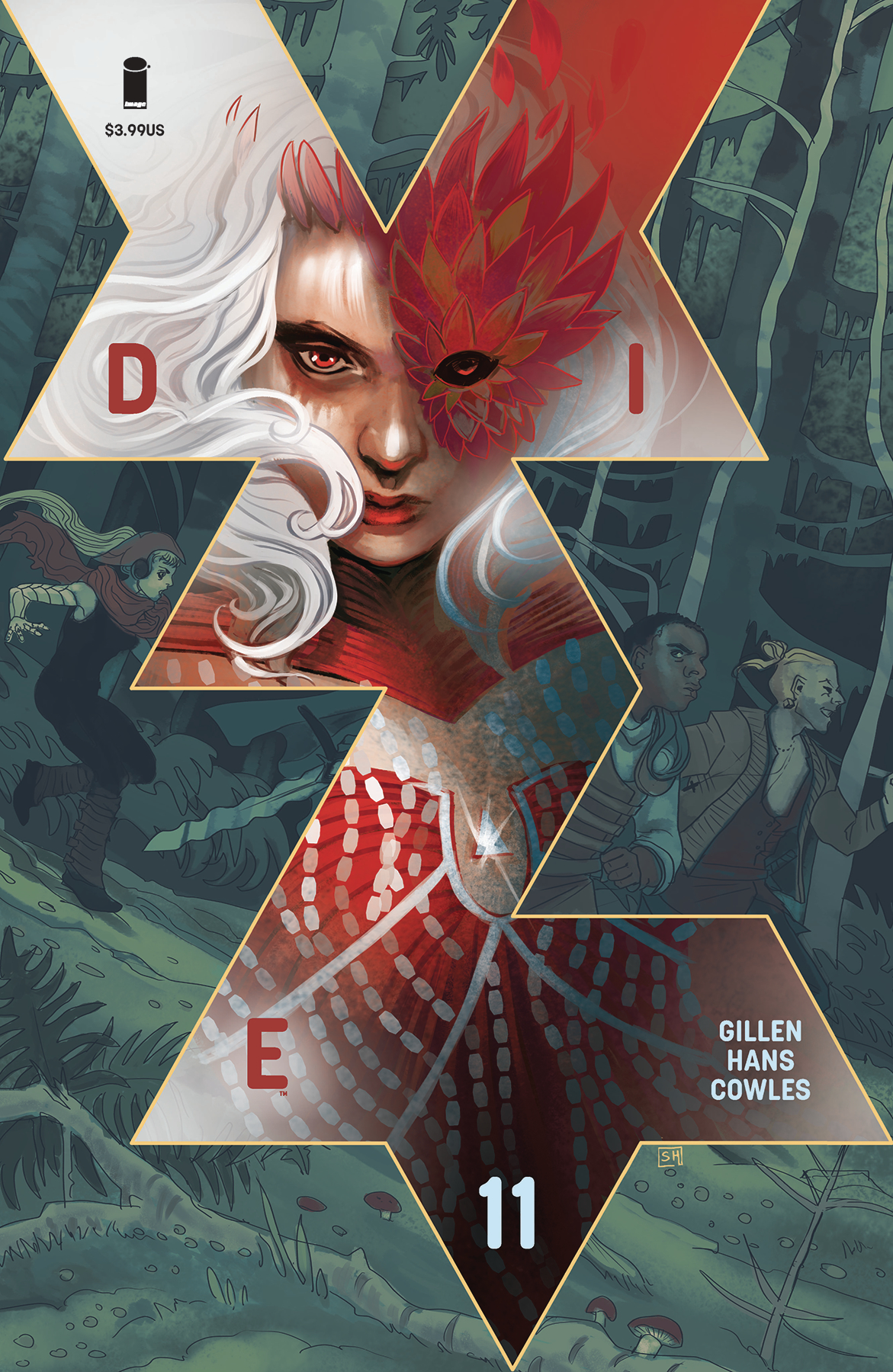 Previously in Die: In 1991, a group of six teengagers went to play a tabletop game. A year later, only five came back. Now twenty-seven years later, they are back in the tabletop world and they can’t go home unless they all agree too. Unfortunately, they all have different ideas on what they want out of this world. Ash is currently sitting as Queen with Izzy by her side while Chuck has freed Matt and Angela are escaping Ash’s prison. Will they be able to reconcile their differences so they can leave this fictional realm?

THE PARTY IS STILL SPLIT

Ever since the destruction of Glass Town, the party hasn’t been able to agree on anything. The story starts with Ash going to talk to the Fallen Sol. Sol was the member of the original six that did not return back. Surprisingly, Ash doesn’t go to him to interrogate but to look for solace as a friend. Despite the Fallen effectively being undead, Sol is able to provide comfort and give some advice. Ash reconvences with Izzy and talks about their plan. Izzy states she wants to make Angria a better place and Ash wants to keep Augustus (her son) safe. Suddenly they hear from a messenger: Angria is about to be invaded at the northern border for disturbing the “Great Game.”

Meanwhile, Chuck, Matt, and Angela are on the outskirts of the capital and Chuck still seems to be reckless. Matt questions him and it is revealed that in the real world: Chuck is dying.The trio ultimately decide that they need to get some Fae Gold. They head into the sewers to look for Fallen to defeat and take their money. After they collect their gold, they find a Fallen whom Angela recognizes as Molly.

I love this series and I was extremely excited to get into a new arc. When I picked it up, it had been several months since the last issue and I was having trouble getting back into the story. This issue is branded as a new story arc but in reality it feels like a continuation of the previous one. You cannot understand what the heck is going on without reading the previous issues.This arc is going to deal a lot with guilt. Many of the characters are dealing with the consequences of their decisions which is foiled by Chuck who doesn’t care because he is about to die. This tension is being brought to the forefront of the story and provides an obstacle for the group to overcome.

It is interesting to look at a story that is effectively a LitRPG and we get to explore what is the game and what is reality. Do these people exist or are they subjected to the gamemasters imagination? I am challenged by this idea as a professional gamemaster. If I bring in a rather dark theme, I know that the story itself is fiction but the implications could be very well set in reality. The protagonist goes through the same thing. Ash had a kid within the world of Die. Is the kid real or is it fake?

I hope that as we begin to learn what this “Great Game” actually is, we will see the idea of reality and fiction continuing to mix. We are told very little about this game but I guess it is like… a game within a game?

I have to once again say that the art of Die is great. It is hard to explain how or why, but there is a huge sense of realism but almost everything has a painted quality to it. I think it is accomplished by how the colors are placed on the page. The figures are solid but the colors look brushed. It is stunning and sublime. Angela’s art in this issue had an emphasis on her red visor. That red took over many of her panels and overcame any other defining feature about her. I’m sure there is symbolism and foreshadowing here and I can’t wait to see it resolve. I’m not sure if we have been introduced to Molly before but I am excited to see how Molly progresses Angela as a character.

BOTTOM LINE: I AM STILL ON BOARD

This comic was not as strong as previous books. I attribute this to it being a while since we last had an issue. I’m not sure if the comic was delayed by the COVID pandemic or the creative team was working on other projects but the time away hurt my memory of the story. Despite this, this is a strong issue and I still love these characters but I would not recommend this as a jumping on point. 4 out of 5 stars for DIE #11 from me.

Die is a story of a group of people trying to determine what is real and what is a game.
Chrissy Williams Clayton Cowles Die Image Comics Kieron Gillen Stephanie Hans
Share. Twitter Facebook Pinterest LinkedIn Tumblr Email
Previous ArticleOnce and Future #8 Review
Next Article Dark Horse announces The Art of Rick and Morty Volume 2