Adventureman’s end came suddenly and tragically but our fictional heroes cannot end on such a heartbreaking cliffhanger! When Claire receives a book about Adventureman perhaps the pulp hero can live on. Find out more in Adventureman #1 by Image Comics! 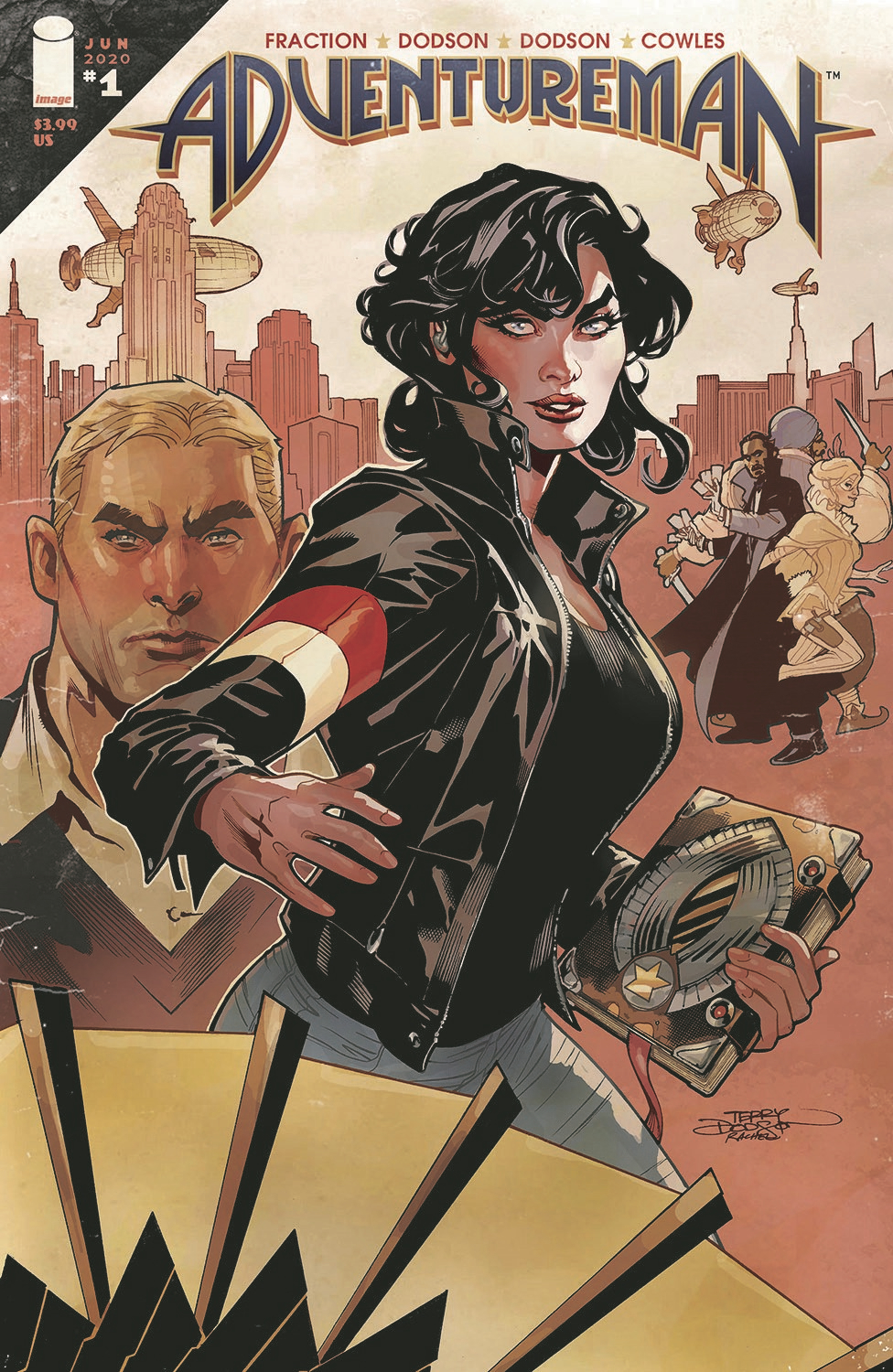 Previously in Adventureman: Welcome to the first issue of this new comic book series! The story features a triple sized first issue following the legend of Adventureman and Adventure, Inc. The story is viewed through the eyes of Claire. Claire is a hard of hearing bookshop owner trying to keep a quiet and peaceful life. Of course like any comic, her life is about to be turned upside down!

THE END OF ADVENTUREMAN

The story begins with Adventureman’s city being attacked by Baron Bizarre and Adventureman is called to help protect his city! He gives his team a supersoldier serum and they prepare for a battle that will certainly be their last. According to the story: it was. Baron Bizarre was able to finish a ritual that creates something called the Obliteration Bible and the Apocalypsyda, a clock that tracks misery, strikes midnight. The Baron Bizarre then fires his Inferno Pistol into Adventureman’s head.

Claire is reading this book to her son, Tommy. The abrupt ending upsets Tommy and insists that it couldn’t be the real ending! However, Claire says that it is simply the end of one story and that there will be others. She then takes out her hearing aids and the sounds of the outside world dims down to simple white noise.

After seeing her relationship with her family, the story turns to an event that happens at Clarie’s work. A mysterious woman comes in and gives her a book. This woman then is kidnapped by a group of people and Claire engages with a man who seemed to have been made of bugs. She thinks she must be going crazy and ultimately ignores the encounter. The book however, seems to be trivia about Adventure. However while Claire sleeps, the book is able to protect her from a bug attack at her window.

This book is split up into two parts. This semi-prologue-ish thing gives us some backdrop about Adventureman and then there is the introduction of Claire. I wasn’t terribly interested in the first half of the book. Adventureman was a cliché and had a huge cast of characters. The creative team named every hero and every villain and there simply wasn’t enough time to really care about any of it.

And then I realized that the Adventureman story is supposed to be a walking cliché.

We are then introduced to Claire who feels very real. She is a hard of hearing adult who has the ability to tune people out (by turning off her hearing aids) and uses that to her advantage. She wants a quiet life and this is immediately contrasted by how loud her family is. Despite her desires for peace, we know that she is about to get thrown into a crazy adventure. I don’t think I would care about Claire if we didn’t spend the first half of the book talking about Adventureman. It is such a stark contrast in tone that in wheels me into Claire’s psyche. What an extremely well thought out creative choice from Matt Fraction.

My biggest complaint is how many people are introduced. I am not sure who is important and who is not at this moment. Adventure, Inc. featured seven heroes with different abilities and an assortment of enemies. Claire also has six sisters that are all very different with strong personalities. I spent a good amount of time trying to keep track of the cast and I’m unsure if they are truly important to the overall story. I’ve read through the book three times for this review and I still can’t tell you all the characters’ names.

I do appreciate the art though. Not only is it incredibly well drawn; each character feels wholly unique. Throughout the panels I can tell the difference between each and every character. On top of just strong character detail, the action scenes feel very dynamic and visually impressive. I loved the hot air balloons attacking Adventureman and how each element was placed on the page. Additionally, the creative team knew how to speed up and slow down your reading pace to control the flow of how you receive the information in the story. Very well done.

A hard-of-hearing single mother is very different and an incredibly interesting protagonist. I want to root for her and I attribute this to how the creative team organized their writing. This sixty page book is well worth the cheap price of admission. Check it out and be immersed in the world of Adventureman! 4.5 out of 5 stars for Adventureman #1 by Image Comics!

As I was reading the first half of the book I was very uncertain about the story. However, we are then introduced to Claire and all the creative decisions the team made works perfectly.
Adventureman Clayton Cowles Image Comics Lauren Sankovitch matt fraction Rachel Dodson Review Terry Dodson Turner Lobey
Share. Twitter Facebook Pinterest LinkedIn Tumblr Email
Previous ArticleVIP Live Chat this Weekend
Next Article New Galactus arrives for HeroClix