Dryad tells the story of a couple who has settled down from a life of adventure after finding a mysterious temple. Now as a guard and a scholar, their twin children are off causing trouble by locating that same temple! Come check out Dryad #2 by Oni Press! 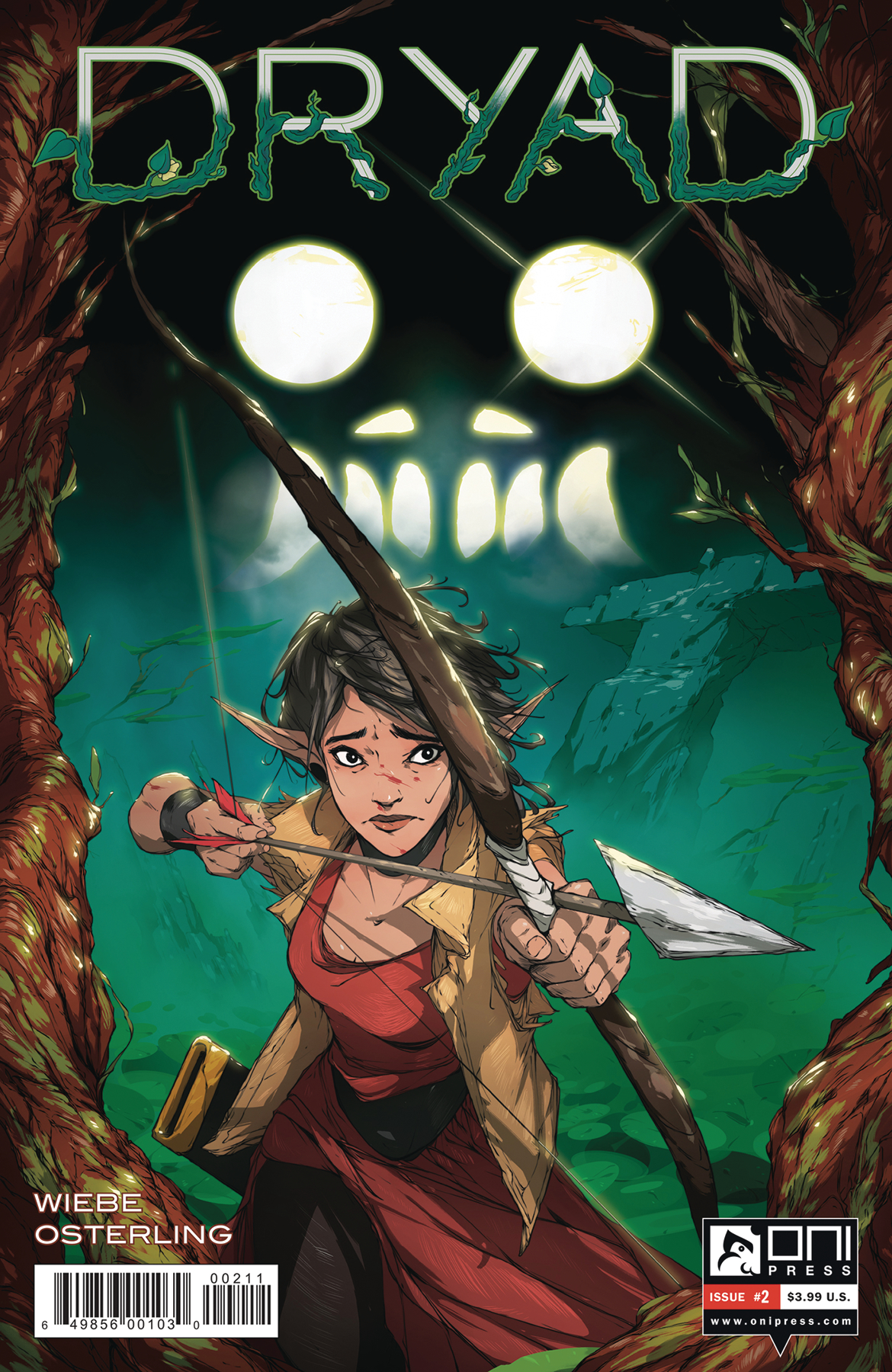 Previously on Dryad: This fantasy series features Morgan and Yale, an elven warrior and human scholar respectfully. They settle in the town of Frostbrook after finding a door that leads to an ancient temple. However, the ancient temple is a sign of intrigue for the youth of the town. When Morgan and Yale’s twin children gather some of their friends to explore the door; trouble is certain to follow.

Rana and Griffon are under attack by… demons? They must escape from the temple and warn the city of Frostbrook that they are under attacked! Only Griffon escapes and the rest of the kids are taken prisoner. Meanwhile, Morgan and Yale are having a little private time in their bath and as they settle down with a glass of wine Griffon runs in to tell them what happened! Morgan grabs her giant sword and gathers Domar to wage war. Morgan believes that these people are from the city and are wearing demon masks. She is vastly outnumbered and decides she needs a better weapon to win.

She goes to a tree trunk and begins to dig and pulls out a box with… a laser rifle gun?!

Using this weapon, Morgan engages with the people who are guarding her daughter.. She injects herself with a chemical into the back of her neck and takes aim. After she fires and takes out one of the guards, she receives a proximity alert and is attacked. Engaging in one on one combat with her assailant, she is able to overpower them. However she is forced to stop when someone points a gun to Rana’s head. The people who attacked Frostbrook recognizes Morgan and subdues her.

NOT YOUR TYPICAL FANTASY BOOK

For me, this series has been about taking the fantasy genre and adding a family twist to it all. Ever since I became a parent, stories involving parenting and the struggle of raising children have been incredibly interesting to me. However, I was caught up guard when they added science fiction elements to the story. Not against it at all but it certainly subverted my expectations. I kind of liked being taken off guard but I am unsure if this strengthens the story. It is like the reader was playing Monopoly but the writers are playing Risk and the reader has to try and adjust to these new rules.

I am intrigued. I want to figure out the mystery of Yale and Morgan’s relationship to technology and how it will affect this small town of Frostbrook. How Griffon and Rana react to their parents not being what they seem to be? I want to see more family drama. However, the family was very separate from each other in this issue. Griffon was separated from his twin and Morgan leaves Yale to find Rana. We get a cute scene between Yale and Griffon but ultimately everyone felt like they were on their own. Hopefully we will get more interpersonal action between the protagonists.

BOTTOM LINE: I ENJOY THE IDEAS BUT NOT THE EXECUTION

I really like the idea of this book and I think this title is very promising. However, I just wanted more family interconnectivity that this book did not have. Now that the technology is finally introduced, hopefully to see the family have more dialogue. I want to see tension between the kids and the parents while dealing with this odd “demon” threat. I think the foundation is there and I am enthused to find out how it is executed in the future. 4 out of 5 stars for Dryad #2 by Oni Press!