By Christopher Rondeau on February 23, 2020 0 Comments

Rod Espinosa has created a fantastic world that is accompanied by beautiful art and engaging writing. Watching Clarinette grow over the course of this story has been fascinating. Come check out what I’m talking about in Adventure Finders #5 by Action Lab Entertainment!

ADVENTURE FINDERS #5 THE EDGE OF EMPIRE 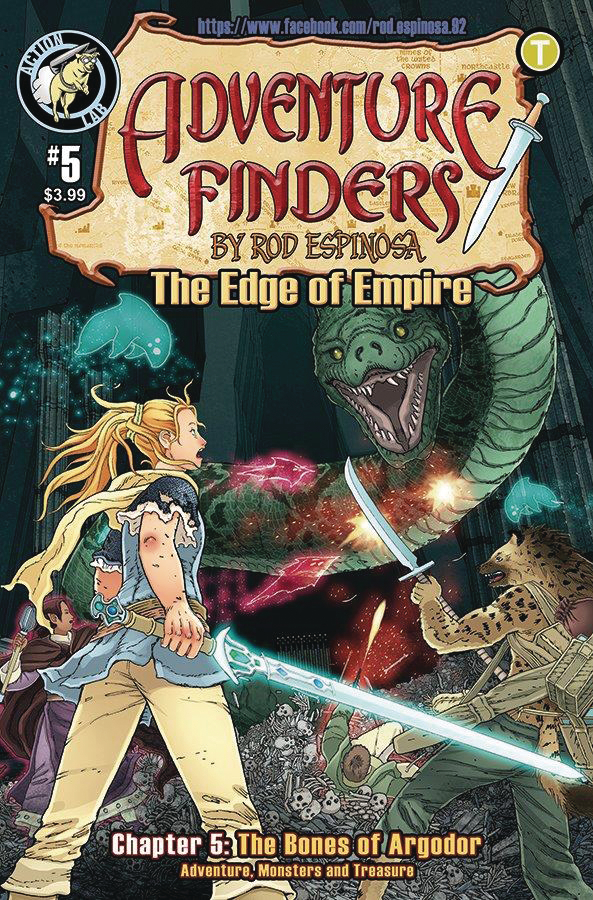 Previously on Adventure Finders: Clarinette has been trying to get this caravan to the city of Good River but they have confronted obstacle after obstacle. First there was an attack by verbolg and then a division in the soldiers accompanying them. With many soldiers dying in the conflict and half the soldiers returning home, Clari must rally the forces she has left to escort the families to Good River safely. Will they succeed?

Clarinette and her crew are hungry and exhausted but luckily they found game and fruit set up on a pedestal. Clari, now rejuvenated, began to climb a mountain to get the lay of the land and find out where to go. Succeeding on her perception roll, she is able to find a landmark. As Clari rushed back to camp, she fell into a tomb and was immediately attacked by a giant snake. Her companions come to her rescue and help her repel the reptilian attack.. They are able to investigate the crypt of “Belderach the Fourth the Seventeen Emperor of Argodor” unhindered. After taking some equipment directly from the tomb, they returned back to the surface to find that their camp had been ambushed again.

Our heroes are grave robbing without remorse! Why?! It doesn’t feel very in character and kind of jarred my immersion from this setting. Additionally the combat with the snakes felt a little boring. The encounter was a little too easy and felt like they just wanted to take up space to make the scene more than a couple of pages. Perhaps it is just my mood for the day, but I also don’t like the fact that there is another ambush that they immediately fail to overcome. The heroes have spent four issues overcoming trial after trial just to end the volume with being captured? The way this was presented didn’t feel that great to me and the story point didn’t feel earned.

The art is, as always, very dynamic and the aspect I most enjoyed about this particular issue. I love the attention to detail to the background without detracting from the primary image. Rod does a great job here and you can tell he loves his product and the story he is trying to tell. While the writing wasn’t up to the standard I was expecting, the issue’s art continues to be better than average and is worth the pick up for that alone.

BOTTOM LINE: I LOVE THIS SERIES AND I FORGIVE THIS ISSUE

This issue was not very strong but the series as a whole has been enjoyable. I think this was a hiccup but I still have faith in the series. I’m looking forward to Volume 3 when it comes out and I trust Rod to continue to tell a good story. And who knows, perhaps it was just my preferences that had an issue with the story and my opinions on the narrative arc. 3 out of 5 stars for Adventure Finders #5 by Rod Espionsa!

While the writing wasn’t up to the standard I was expecting, the issue’s art continues to be better than average and is worth the pick up for that alone.