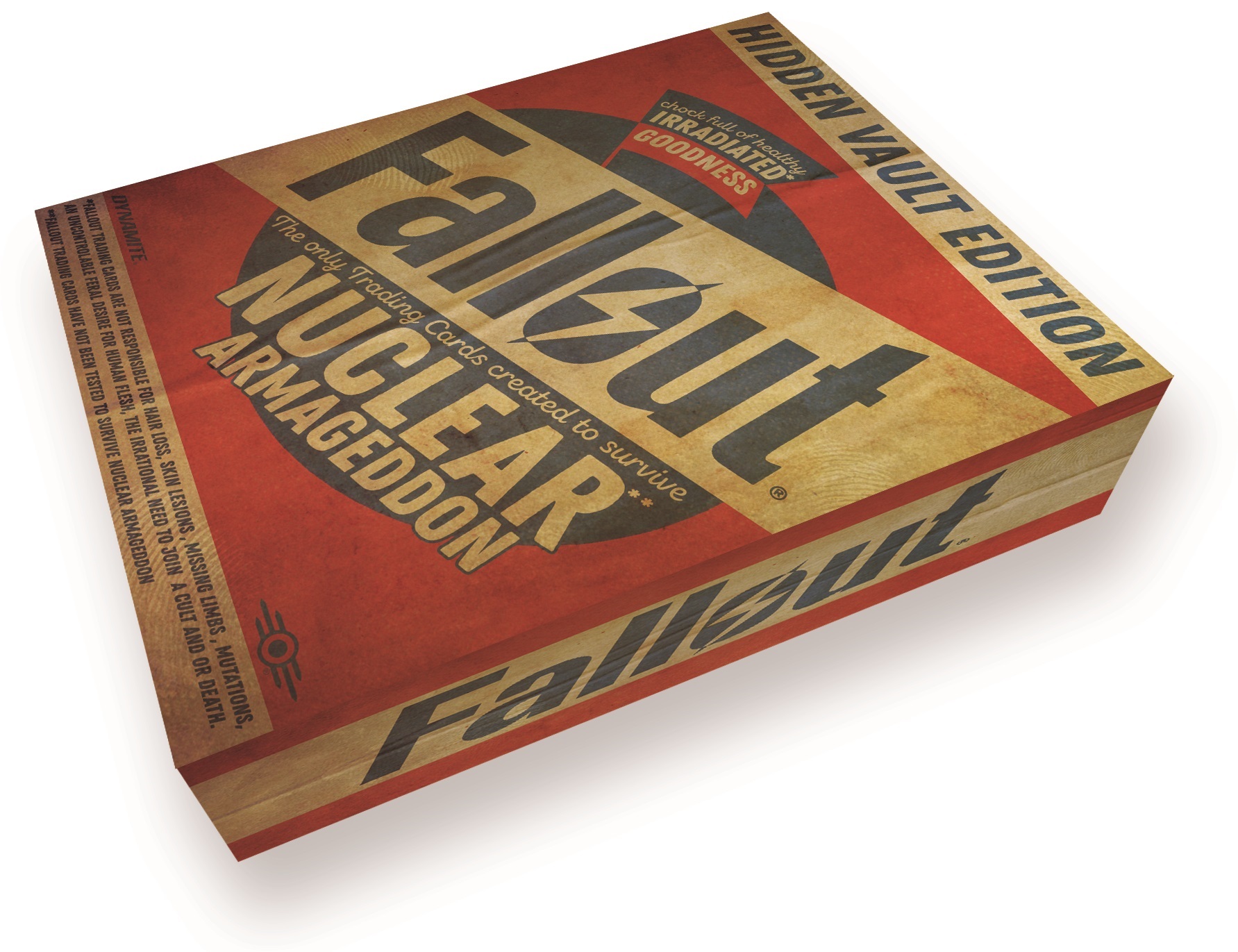 Last year, Dynamite partnered with Bethesda Softworks® to create and release the first-ever Fallout trading card series. Available across the globe in stores including Target, GameStop, GAME (UK), Amazon, Toynk Toys and comic book specialty stores, they flew off the shelves and sold out almost instantly at retail. This year, Dynamite celebrates the sequel series by offering an exclusive, limited-edition collectors box directly to the fans!

Backers on Kickstarter can get the Hidden Vault Collector’s Box, stuffed with all the collectibles to prosper and barter within the post-apocalypse. Each of these custom packages, numbered and limited to 600, includes a complete base set of the sold-out Series 1 Fallout Trading Cards (144 total cards) saved for this special campaign, plus 5 foil packs of Series 2 (50 more cards), and 7 exclusive S.P.E.C.I.A.L. cards created only for this package. That’s a massive haul of over 200 collectible trading cards.

And there’s more… All Hidden Vault Collector’s Boxes additionally include two rare items. Bethesda is allowing artists outside of their company to contribute official art to the Fallout franchise through a limited number of literally one-of-a-kind sketch cards, from only the most talented artists in the field! These sketch cards are exclusive to Kickstarter. Cream of the crop artists including Andy Bohn, Norvien Basio, Miranda Gainey, Rusty Gilligan, Alex Mines, Rich Molinelli, Barry Renshaw, April Reyna, Xinjix & more! 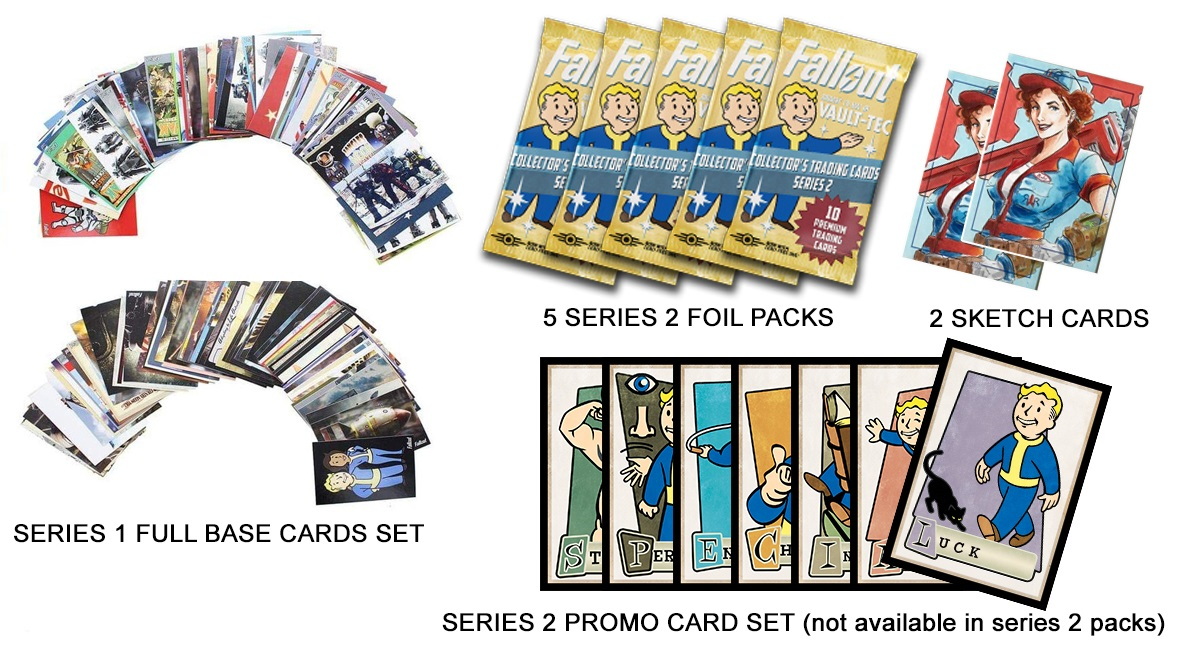 The Hidden Vault Collectors Box is the perfect way to start your Fallout collection, but fans will have the option to increase their loot with more foil packs and boxes from Series 2. For those who want a fun way to store and present their new collections, also available are Nuka-Cola branded binders, designed with realistic weathering details. 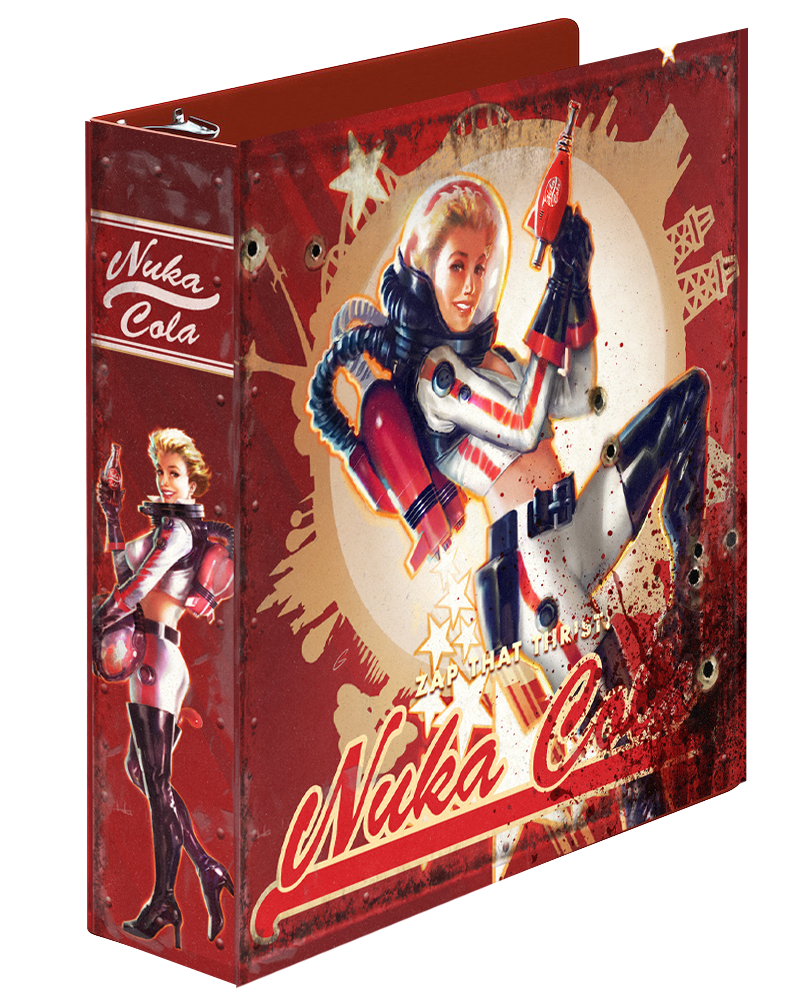 In total, Series 2 features a base set of 100 full-color, double-sided cards, 100 holographic rainbow foil cards, 48 chase cards portraying the in-game Perks obtained by leveling up, and 8 ultra-rare RobCo Fun cards. The RobCo Fun cards can only be found once in every 144 packs! 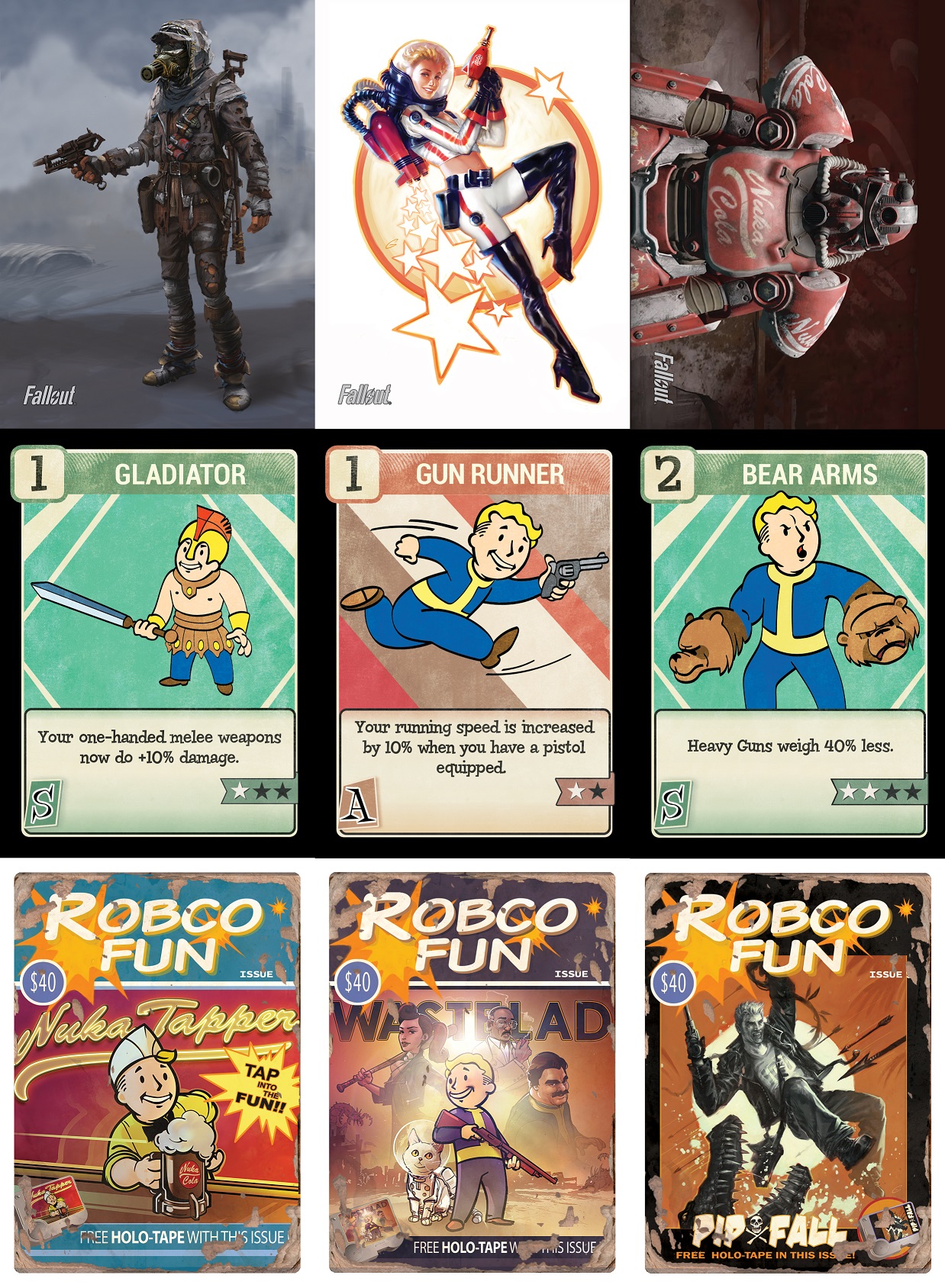 Collectors looking for truly exclusive Fallout loot should look no further than the uncut sheets of Perk cards, set aside by the printer to verify production. Even more exclusive, go for an actual printing plate!

“The first series was such a success that we knew the Fallout fans deserved something even bigger and better if we went further,” said Nick Barrucci, Dynamite CEO and Publisher. “Expansions like the Perk cards worked out perfectly, thanks to the mechanics and design of the games aligning perfectly with trading cards. Bringing these exciting collectibles straight to the fans this time around and adding some cherries on top sealed the deal! And it could not be more of a pleasure working with our partners at Bethesda to see this through.”

About Dynamite Entertainment
Dynamite was founded in 2004 and is home to several best-selling comic book titles and properties, including The Boys, The Shadow, Red Sonja, Warlord of Mars, Bionic Man, A Game of Thrones, and more.  Dynamite owns and controls an extensive library with over 3,000 characters (which includes the Harris Comics and Chaos Comics properties), such as Vampirella, Pantha, Evil Ernie, Smiley the Psychotic Button, Chastity, and Peter Cannon: Thunderbolt.  In addition to their critically-acclaimed titles and bestselling comics, Dynamite works with some of the most high-profile creators in comics and entertainment, including Kevin Smith, Alex Ross, Neil Gaiman, Andy Diggle, John Cassaday, Garth Ennis, Jae Lee, Marc Guggenheim, Mike Carey, Jim Krueger, Greg Pak, Brett Matthews, Matt Wagner, Gail Simone, Steve Niles, James Robinson, and a host of up-and-coming new talent.  Dynamite is consistently ranked in the upper tiers of comic book publishers and several of their titles – including Alex Ross and Jim Krueger’s Project Superpowers – have debuted in the Top Ten lists produced by Diamond Comics Distributors.  In 2005, Diamond awarded the company a GEM award for Best New Publisher and another GEM in 2006 for Comics Publisher of the Year (under 5%) and again in 2011.  The company has also been nominated for and won several industry awards, including the prestigious Harvey and Eisner Awards.

About Bethesda Softworks
Bethesda Softworks, part of the ZeniMax Media Inc. family of companies, is a worldwide publisher of interactive entertainment software. Titles featured under the Bethesda label include such blockbuster franchises as The Elder Scrolls®, Fallout®, DOOM®, QUAKE®, Wolfenstein®, Dishonored®, The Evil Within™, Prey® and RAGE®. For more information on Bethesda Softworks’ products, visit www.bethsoft.com.