By Christopher Rondeau on October 8, 2019 0 Comments

The next issue of Dungeons & Dragons: A Darkened Wish by IDW Publishing is here! Come check out the story and see Helene and her crew go from young adventurers to hardened heroes. 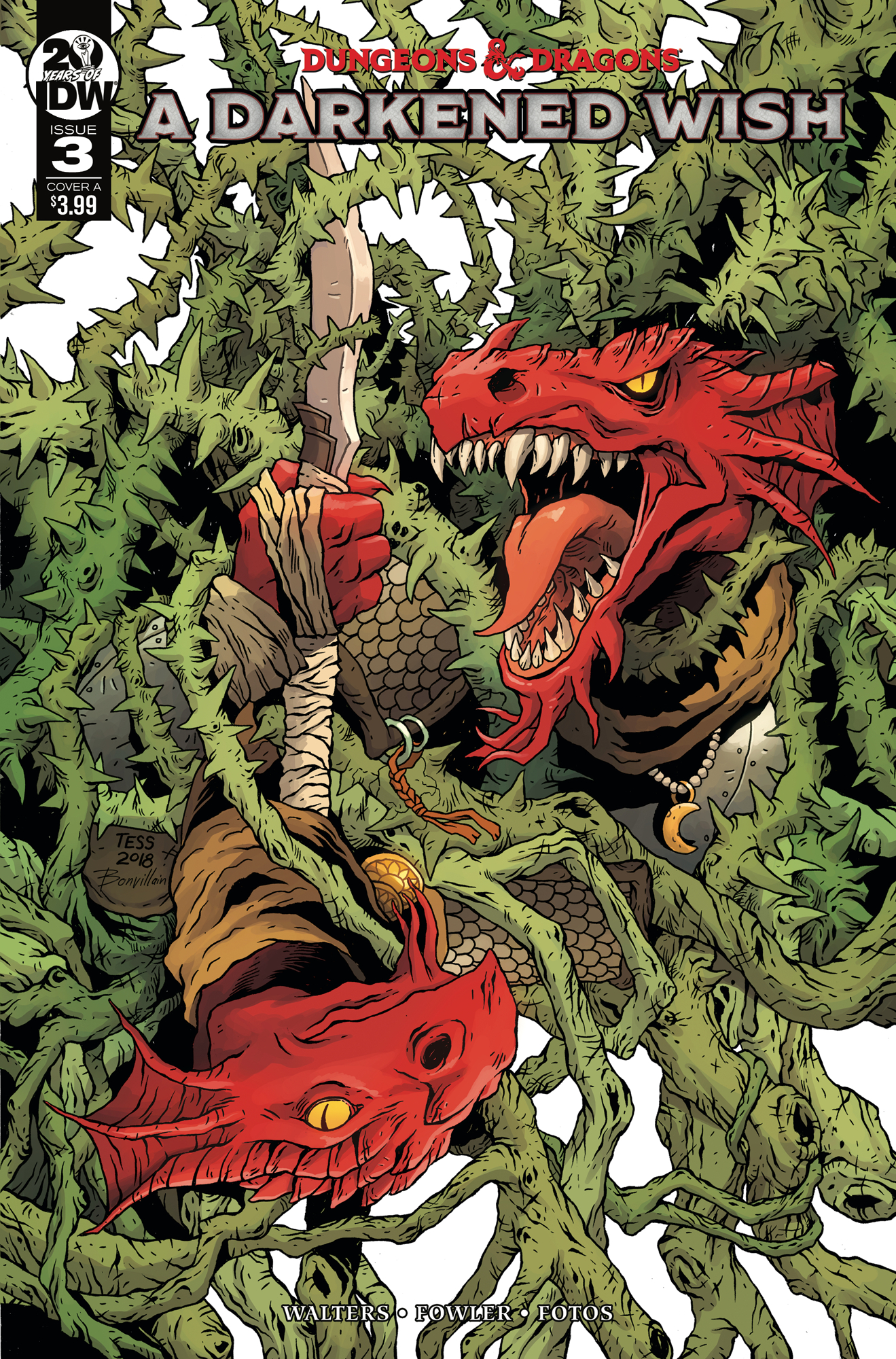 Previously on Dungeons & Dragons: A Darkened Wish: In the past, the Great Wyrm, Hoondarrh, destroying the town of Mintarn and winning the day. In the present, can Helene and her crew come together to save the world to finally stop the dragon? How far will they go and will old deities deliver on old promises?

THE MANIPULATION OF DEMONS

After the destruction from the previous issue, much of the party is out trying to save and evacuate the people of Mintarn. Solivigant, a kenku, has gone to look for Helene and finds her in the ocean among the destruction. Using a diamond, he casts an ancient ritual to bring her back and our heroes are off west to warn the party’s homeland of the dragon. However Helene is too late, and she ends up convening with her goddess, an angel known as Zariel. Helene wants revenge and the pact is set and Zariel promises to help. In the future, the party is told that the village of Dynnegall is under attack. They find villagers there but it is again too late, as the villagers have been turned into lycanthropes. Helene and Rayonde set off to the moonwell to see if they can stop the rest of the villagers from being sacrificed. When they arrive they prepare for battle but Helene can see Zariel in the distance. Zariel shows her true colors and takes Raynode and turns him into something else, something that can destroy Hoondarrh. He becomes a reincarnation of the Skadaurak, a once dead red dragon and Helene’s pact is soon to be completed.

WE ALL KNEW WHO ZARIEL IS RIGHT?

Wizards of the Coast has been doing a lot to advertise their latest module Descent into Avernus which features demons, devils, and Zariel heavily. I wonder if it was intentional to mention Zariel for reference to their other products. For those of you who may not be familiar with this D&D enemy, she is the devil lord who has domain of the layer of hell known as Avernus. Once an angel, she grew obsessed with war and fell from the heavens. She is a big bad guy figure and one that many people of this fandom will recognize.

But to actually reviewing the book, I do say that I really do love the art. Tess Fowler has done a good job bringing the book to life. I love with her drawing of hair and how complex it looks. My judgement of the artist is largely dependent on how well the background grips me. Sometimes you can tell when the background is a second thought. In this book, the background seems to be well thought out and you can see the lines in the back clearly but not overwhelming the main action of the narrative.

The writing itself was done well, the tempo of the book was steady  and I appreciated always feeling like the narrative arc was going somewhere. There is a split narrative here, the first is the past where our young heroes are trying to figure out what is going on as well as growing up themselves. The other are the harder grittier hero trying to deal with the present. It is hard to do two timelines of the same characters, but this team pulls it off. If I were to praise one faction of the writing; it would be that the characterization is done extremely well and characters who are being featured feel like they are growing.

I think the theme moving forward is going to be on mistakes. Helene made a terrible mistake and it has cost her dearly. I imagine the next issue will involve having a discussion about this whole incident with the party. How will Helene overcome her mistake? I think Dave Walters has set himself up for some amazing story telling that I hope his team delivers in future books.

I work in Tabletop Roleplaying full time as a Game Master but this is the first book I have picked up out of this series. This is not a good jumping on point and I had to do a bit of research to learn the names and catch up on the storyline. However, I think this book is good enough for me to want to go back to read the previous ones and pick up new books when they are published. If you are a fan of the lore of Forgotten Realms and D&D, this is a must pick up. And if you are not familiar with the world, I think this is a good story regardless and worth your attention. 4 out of 5 for Dungeons and Dragons: A Darkened Wish #3.

Dungeons and Dragons: A Darkened Wish #3

The writing itself was done well, the tempo of the book was steady and I appreciated always feeling like the narrative arc was going somewhere.