Dynamite and Humble Bundle announce the launch of a Hyrkanian-sized bundle deal with over 120 digital issues of Red Sonja and supporting the Comic Book Legal Defense Fund! AND ongoing Red Sonja writer Mark Russell has written a new standalone tale exclusive to Humble Bundle!
The bundle will only be available for a short time, so check it out here! – RED SONJA BUNDLE
Humble Bundle’s innovative pricing scale allows fans to pay what they want to fit their budget exactly. Their purchase will fall into one of four tiers, unlocking more and more comics with each tier and including those from the previous ones. At the top tier, one can get the equivalent of 131 issues for only $18, which is 95% off what would normally be approximately a whopping $350! In terms of page count, that all adds up to an insane 3,797 pages of comic books.

The exclusive story, titled “Petitioning the Queen,” is a fun special story of Red Sonja struggling to prepare for a massive war while juggling her other new duties as Queen of Hyrkania. A pair of “magical” dwarves cause havoc in the streets and force Sonja to confront powers far beyond her understanding. It’s not to be missed, as story elements here will reverberate in the flagship and something else coming up…

Ongoing Red Sonja writer and multiple Eisner nominee Mark Russell (Wonder Twins, The Flintstones) is joined by co-writer Bryce Ingman (Edgar Allan Poe’s Snifter of Terror) for this story. The gentleman drawing it is Craig Rousseau (Impulse, Batman Beyond). Dearbhla Kelly and Hassan Otsmane-Elhaou are also migrating over from the main series to serve up colors and letters, maintaining visual consistency through this acclaimed run. While it’s all wrapped up in the beautiful bow of a cover by regular artist Mirko Colak (Conan).

Writer Mark Russell explains, “This is a fun one-off that takes place between the first and second issues of the main series, and yet, introduces characters who will appear much later in the series. Craig’s lighter, more fantasy-toned art and Bryce’s clever writing come together really well in a story that’s more weirdly whimsical than the main series.”

“Mark’s Red Sonja certainly kicks a lot of ass, but her most important weapon isn’t a sword, it’s her mind,” said co-writer Bryce Ingman. “She’s a whip-smart tactician who’s usually a step or three ahead of those who oppose her, and we’ve stayed true to that dynamic in this Humble Bundle story while at the same time challenging Sonja’s wits by adding some new, irreverent fantasy elements to the mix. I’m insanely happy to get a chance to join in on the fun.”

“I jumped at the chance to draw a Red Sonja short, especially knowing Mark was involved, and Bryce is bringing the A-game too!,” said artist Craig Rousseau. “Even more so since the fun, quirky aspect of the story let me cut loose. It’s definitely a different, dirtier beast than drawing shiny superhero or sci-fi type stories, and the smaller character moments are what sold me.”

“Don’t miss out on the exclusive Humble Bundle One Shot of Red Sonja, created specially just for this Book Bundle!,” added Kelley Allen, Director of Books at Humble Bundle. “It has everything including dwarf magic, defecation pits and even a little bit of cowbell to boot – superb!”

To sweeten the deal even more, a portion of the proceeds will be contributed to the Comic Book Legal Defense Fund and the National Coalition Against Censorship. The former is a cherished institution within the comic book industry that provides legal support for artistic professionals around the globe whose work is challenged by censors. From elementary school libraries to imprisoned political cartoonists, they tackle cases of all sizes and notoriety. Other functions of the CBLDF include research and education on the history of censorship of this art form. The National Coalition Against Censorship is an umbrella alliance of 50 American based organizations with a shared mission of combating censorship across art and expression, including the CBLDF. Dynamite has a history of working with divisive writers, artists and properties who attract the ire of censors such as The Boys, the Chaos! Comics stable of characters, creators including Howard Chaykin and Garth Ennis – and even Red Sonja herself.

“Red Sonja is one of our first licenses and series we’ve released, and we’ve had the great fortune to work with some of the best creators in the industry from Mark Russell to Gail Simone, Amy Chu, Michael Avon Oeming, Kelly Sue DeConnick, Marjorie Liu, Mike Carey and so many other luminaries. We’ve also worked hand in hand with Humble Bundle over the years to create compelling packages for their fans and readers,” said Nick Barrucci, Dynamite CEO and Publisher. “Being able to bring all of these great comics to Humble Bundle to reach a new and larger audience is extremely rewarding and helps grow the comics market. And the fact that we also get to support two very worthy charities in The Comic Book Legal Defense Fund and the National Coalition Against Censorship helps us give back to the medium we love!”

“Like the namesake of this bundle, Dynamite Entertainment is a charismatic force for good!,” said CBLDF Executive Director Charles Brownstein. “We’re especially excited about the comics in this bundle. Mark Russell is a master of subversive free expression by exploring deep themes in unlikely spaces. His work and the other books in this bundle illuminate how free expression can be positive, catchy, inspiring, and fun. We are so grateful for the ongoing support of Dynamite, Humble Bundle and all the fans!” 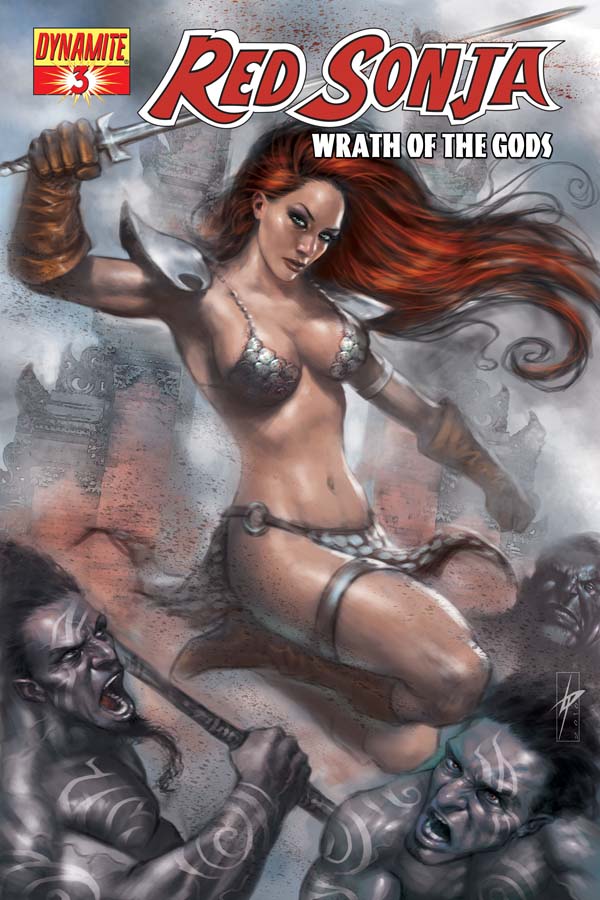 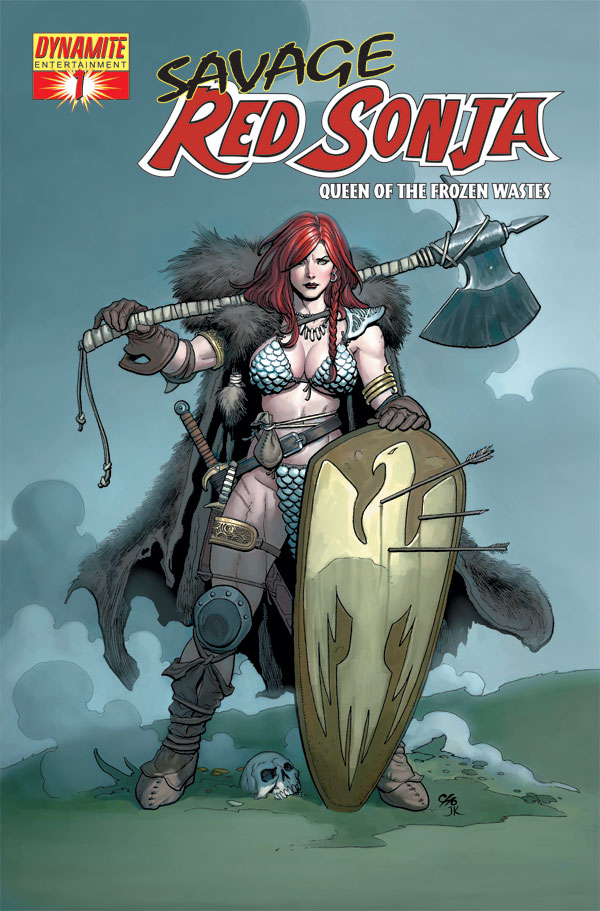 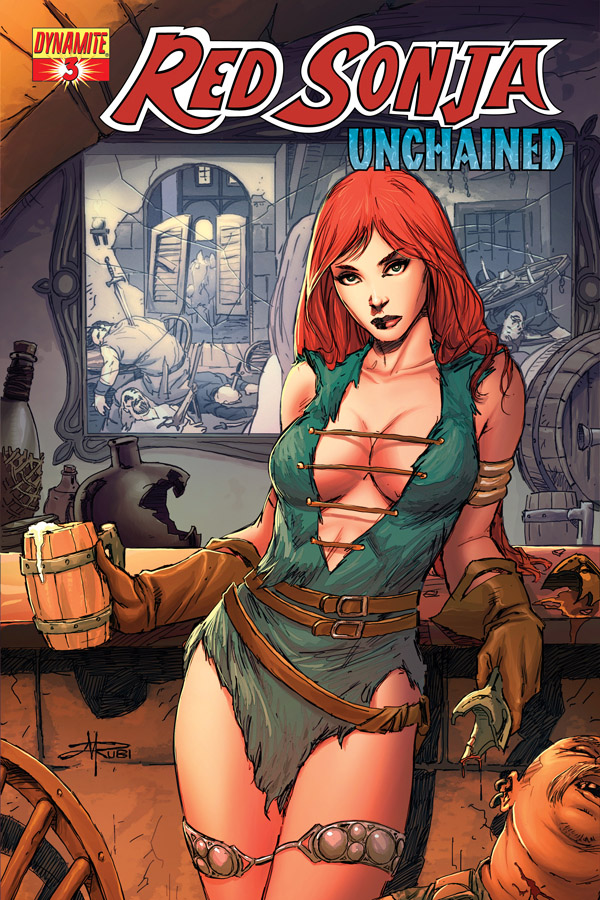 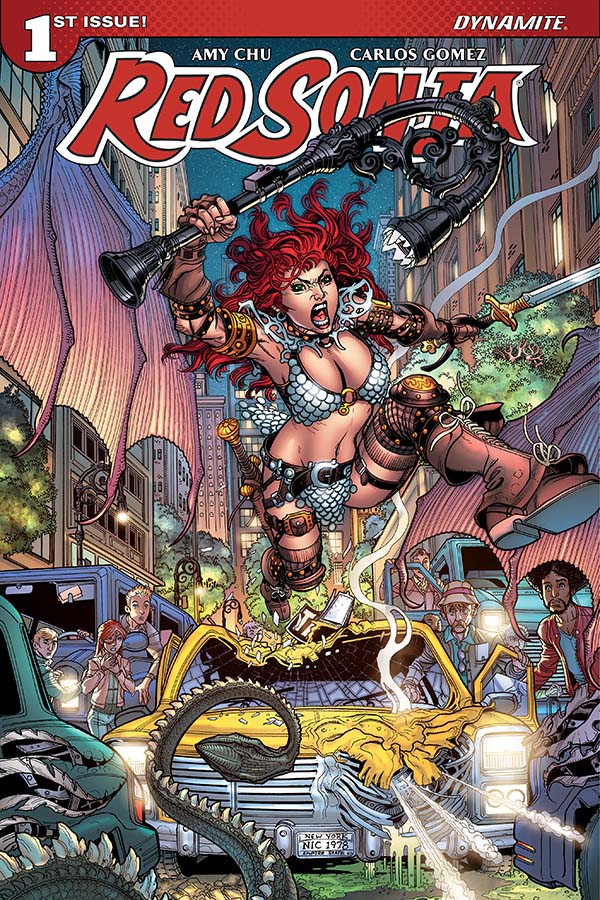 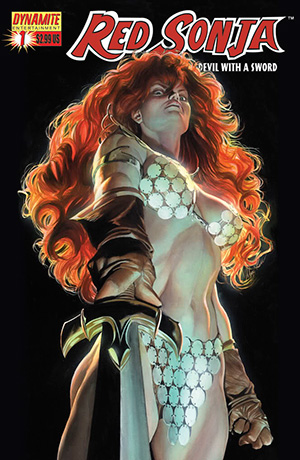 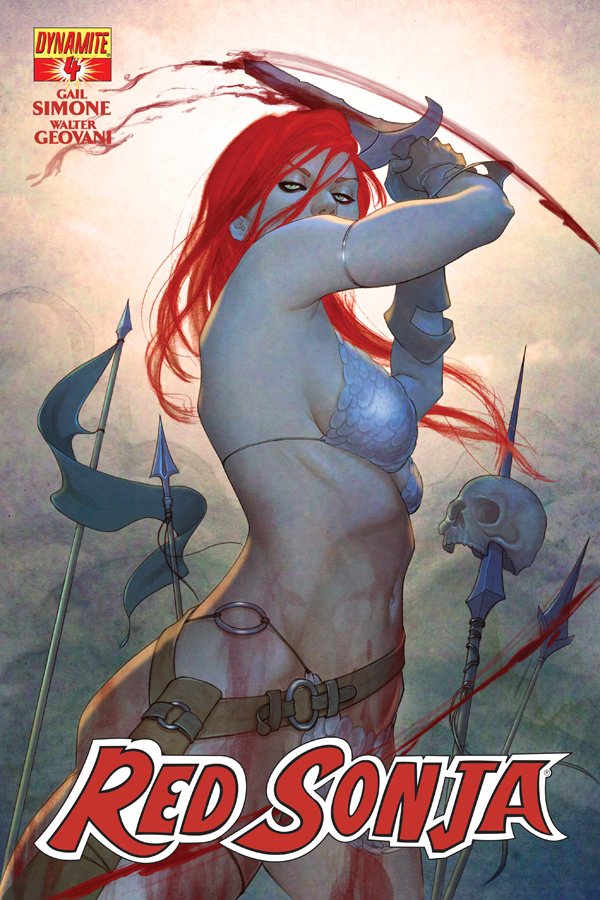 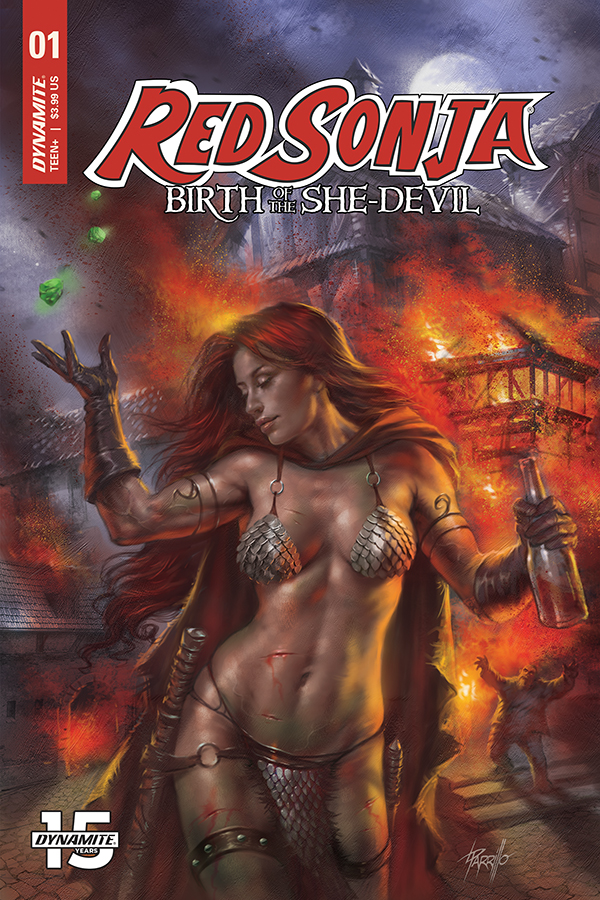 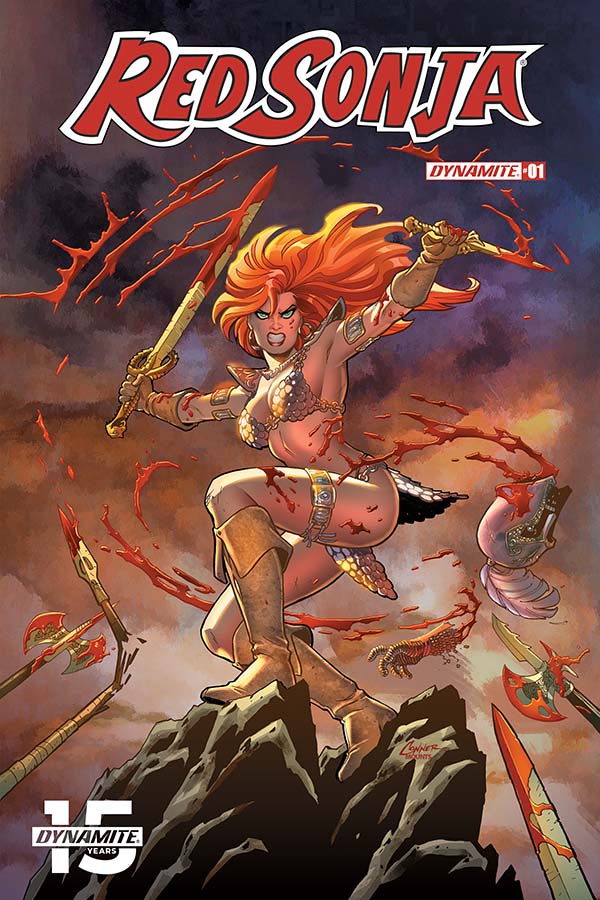 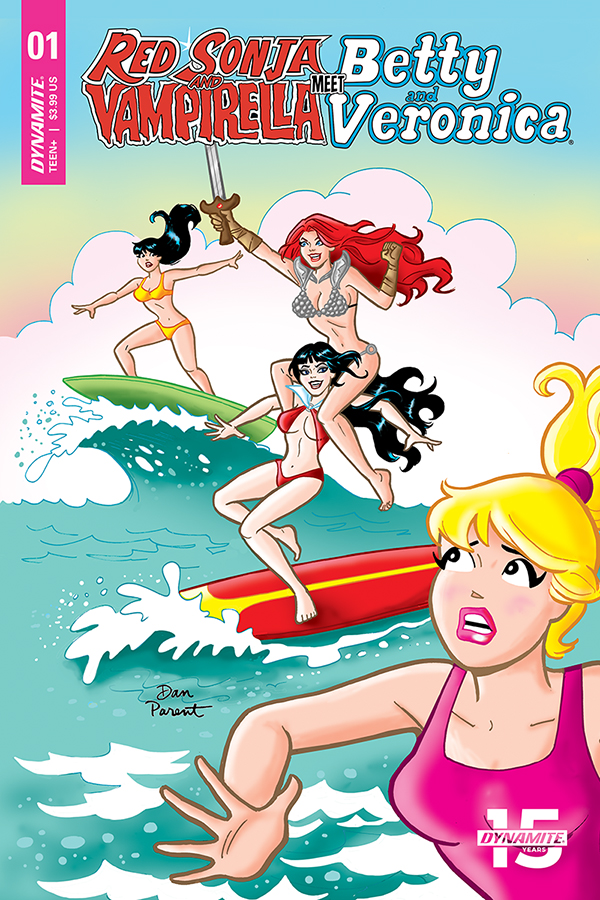 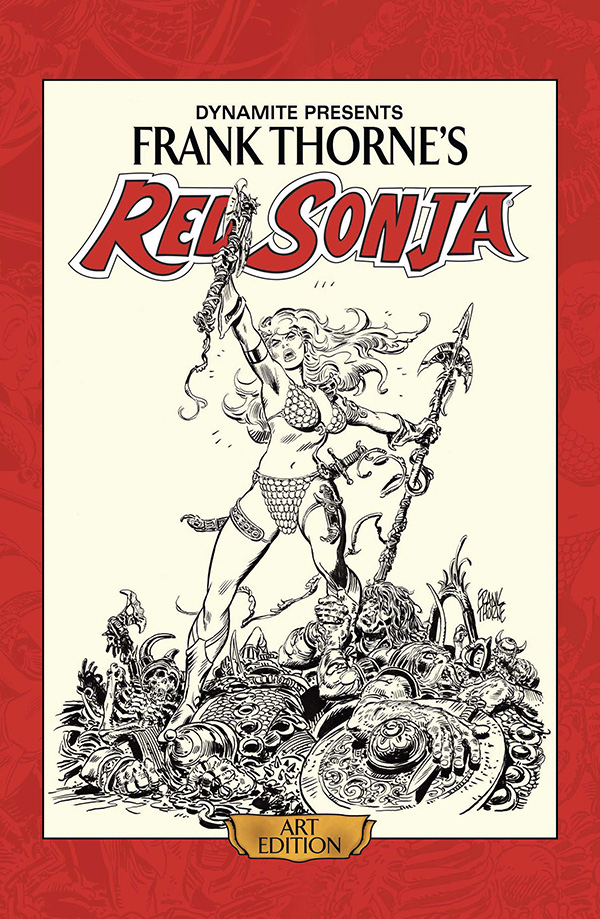 A real cherry on top to reward fans for supporting the bundle and charity sponsors – the book collecting high quality scans directly from definitive Sonja artist Frank Thorne’s original art. See all his lines and even imperfections exactly as they would look in person.