Or – “The Best There Is At What He Does: Moving Marvel Product.” 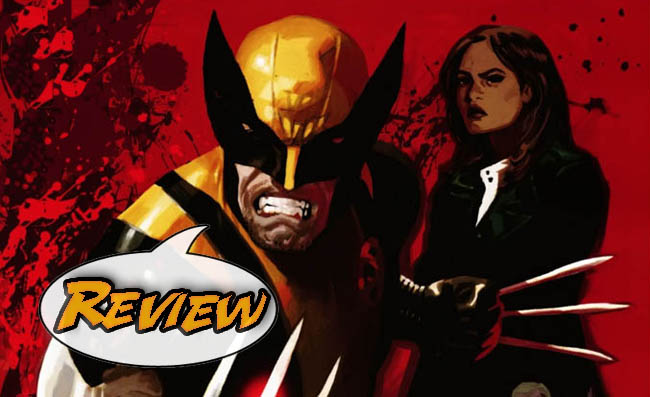 The more I read ‘Fear Itself,’ the more I think that it is designed entirely as a “Oh YEAH?” to DC’s ‘Blackest Night’ crossover.  The ‘seven mysterious new weapons related to one we already know,’ the general fear factor (Not the Joe Rogen one, mind you) and the use of specific characters in specific roles make me think that, at least at some point, someone said “Let’s do that, only with our guys!”  It’s a common story in comics, but what does it mean for the actual stories? Previously, on Wolverine – Fear Itself: Blah blah blah daughter of the Red Skull, blah blah blah ancient Norse thingy, blah blah powersource, blah blah hammers from the sky blah, blah blah terrible tragedy no one would ever have predicted.  And then they all fight.  Also:  There’s Wolverine!

Yet Another Legacy Of Norman Osborn

This issue starts by cementing something that I’ve been wondering about for a while:  Something weird is going on causing people to panic and riot, leading to the strangenesses we’ve been reading about in ‘Fear Itself.’  It’s nice to have that for certain, but it’s odd that it wasn’t spelled out anywhere until I read this issue.  In any case, we start out with the discovery of the U.S.S. Prometheus, a helicarrier that was designed by Norm-O for use in his evil future plans, but mothballed when He Of The Corduroy Hair was unseated by the events of Siege.  (I know that was recent, but doesn’t it already feel like FOREVER ago?)  The ship is inevitably stolen by ne’er-do-wells, in this case members of S.T.R.I.K.E. (a paramilitary group created by Alan Moore years ago during his run on Captain Britain, but mostly inactive since) who have a mysterious mission for the ship.  At the same time, Wolverine is in the midst of the rioting in New York, forced to fight The Scarecrow (Marvel version) who is using the fear and panic for his own ends.  This moment is another that seems designed solely as a response to DC’s use of THEIR Scarecrow in their emotion-based limited series.  Unlike his counterpart, though, Marvel’s Scarecrow is something of an idiot, and is easily dispatched by Wolverine with a gas canister, leading us to some interesting character stuff…

Apparently, our pal Logan (yes, I’m aware that nobody calls him that anymore) has a steady girl, a reporter named Melita Garner, who is also stuck in New York amidst the chaos.  We see a very loooong sequence that amounts to little more than talking heads as Melita and Wolverine discuss the weirdness, his job, her job, the fact that he’s not protecting her or nothin’, and a couple of other bits of interesting information.  Commander Steve Rogers suddenly calls with information on the S.T.R.I.K.E. helicarrier skyjacking, and asks Wolverine to intervene.  He, in turn, sends Melita back to Avengers Tower (which sets this particular story earlier than last week’s issue of Avengers, apparently) to dig up information on S.T.R.I.K.E.  If he’d just waited a page or three, she would have had more than enough information, though, as the helicarrier shows up in the skies over New York City, dragging a number of bodies beneath the ship to…  I dunno.  Apparently, to take advantage of the general tenor of fear?  Our hero infiltrates the ship, and his plucky girl Friday discovers the shocking secret of Norm-O’s flying superfortress:  Two words, rhymes with “wuclear fom…”

The good news is that this seems to be quite strongly tied to Wolverine’s new corner of the Marvel Universe (they even have a handy guide to the Wolverine books, treating them as their own sub-universe, apparently) using his supporting cast, and presumably staying true to his post-movie characterization.  I don’t normally read his books, but you can see where fans of the regular title would be gratified to have a coherent character.  That said, I don’t see why this wouldn’t work within the Wolverine title, except to raise the units sold, and this particular corner of Fear Itself is pretty far removed from the central conceit of the story.  All in all, though, it’s a competently handled book, with intriguing art, but the execution of the story is talky and run-of-the-mill.  Fear Itself: Wolverine #1 is designed to get the hardcore fans of the character while remaining accessible to the casual buyer, and it’s good enough to get the job done, earning 2.5 out of 5 stars overall. I wasn’t overcome with the urge to buy more Wolverine titles, but I wasn’t left out in the cold, either…

Faithful Spoilerite Question Of The Day: Is it better to see these sort of side tales rather than try and stuff all the heroes into the main narrative (ala Infinity Gauntlet)?