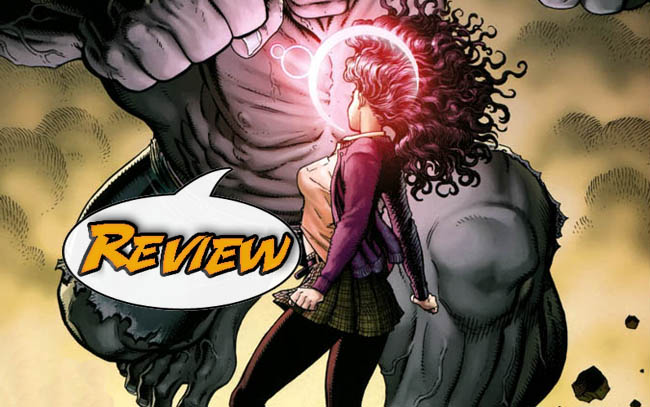 I very clearly remember the first rumblings of Ultimate X coming in the wake of Ultimatum, back in the fall 0f ’09.  I remember being very upset last summer when I missed the window to review issue #2 (a very likable chunk of comics reading) and was pretty much certain that I’d never get my chance to talk about the book as it slowly fell off my radar, presumably ending.  Imagine my surprise when issue #5 came out this week, roughly a year after my frustrations on issue #2.  Will it be worth the extended wait? Previously, on Ultimate X: So, Ultimate Magneto managed to pull off what his regular Marvel counterpart could not, scoring a decisive victory in his war against humanity.  New York was flooded, millions were killed, and the Ultimate Universe was (legitimately) never the same again.  The  X-Men, as well as the majority of the mutants in this world, were murdered, scattered, or otherwise rendered useless by the disaster.  In the wake of it all, Jean Gray (now calling herself Karen Grant and wearing a much more flattering hairstyle) has begun collecting at-risk mutants in a quest to fulfill Professor Xavier’s dream of peaceful coexistence.  So, what in the world is the HULK doing here?

It’s The Ultimate Universe, One Hulk Per Each Team…

We open with Jimmy (teenage son of Wolverine, apparently) trying to scam beers while hiding out in New Jersey.  I’m immediately struck by how different this character’s personality is from his abrasive, paranoid and unpleasant father (all traits even more noticeable in the late Ultimate Wolverine) when he is suddenly attacked by Sabretooth!  While I had to stifle a sigh as the narrative quoted ‘Pulp Fiction,’ the battle is quick and decisive, and ends seconds before Jimmy would have been gutted and dismembered.  They even correctly identify where Tarentino pulled part of the quote (Hint:  Not the Bible.) and I’m slowly pulled back in.  The super-expressive art of Arthur Adams helps immensely, as Jimmy’s carcass is dragged back to the hotel by Jea–  I mean, Karen.  We get a little bit of her friends (Liz Allen, from Ultimate Spider-Man, as Firestar, and a hawk-like kid called Derek) as they worry about why their friend isn’t healing like normal.  Karen sets out on a recruiting mission, and finds her final soldier at a local soup kitchen:  one Doctor Robert Bruce Banner.

Also A Wolverine.  (It’s Not THAT Different.)

What does she want with the original Hulk?  How about a little cold-blooded revenge?  Karen sics Bruce’s gray alter-ego on the man who roughed up her Wolverine, and this battle goes pretty much the same way that one did, right up to the part where the weird super-speed whooshing keeps it from turning fatal.  Quicksilver makes his presence known, with a mutant war-team of his own, including Ultimate Mystique and Blob, and the two generals take one another’s measure.  I tend to rag on Jeph Loeb for the high melodrama and testosterone content of his stories, but this one works quite well, as Quicksilver takes Karen’s measure, and the progeny of Xavier and Magnus show that each is more (and less) then their ‘fathers’ were before them.  In a lovely meta-moment, the source of the voice-over throughout the issue, examining words made famous by Samuel L. Jackson, is revealed to be…  Nick Fury, as ‘played’ by Samuel L. Jackson.  I admit it, I chuckled.  Turns out this whole plan has been set in motion by the late Wolverine to provide a counterbalance in a world gone mad, to “make up for the past and bring about a brighter future,” to hear Kar-Jean tell it.

The Verdict: Turns Out It’s A Prequel!

It could easily have been a moment that made me angry, as we end with one of those “The Beginning” signs, and the new status quo established.  Quicksilver’s team of mutants (including one member thought dead, but obvious in retrospect) and Karen’s team of mutants are both active in the field, both aware of one another and both set on “fixing” things their own way.  The story touches on the awful shared origin of all the heroes in the Ultimate Marvel U, and makes it almost palatable for me, and the entire book is just flat-out beautiful.  Having not been waiting for this issue (I honestly thought it came out a year ago), I wasn’t bothered by the long delay, and I even found the segueway into what I suspect is a new Ultimate X-Men title to be intriguing (at least partly due to the timing of this issue coinciding with the new Ultimate Spider-Man.)  All in all, it’s a book I didn’t expect to like, and certain didn’t expect to like this much, so kudos to Marvel.  Ultimate Comics: X #5 is somewhat like a fancy gourmet pizza, combining ingredients I might not  normally enjoy (goat cheese, sun-dried tomatoes, Wolverine) into a palatable whole, earning a very impressive 4 out of 5 stars overall.

Faithful Spoilerite Question Of The Day: Have rumors of the Ultimate Universe’s demise been exaggerated?  Or will indecision be the death of the beast?