Or – “The Last Of The First Comics Books…” 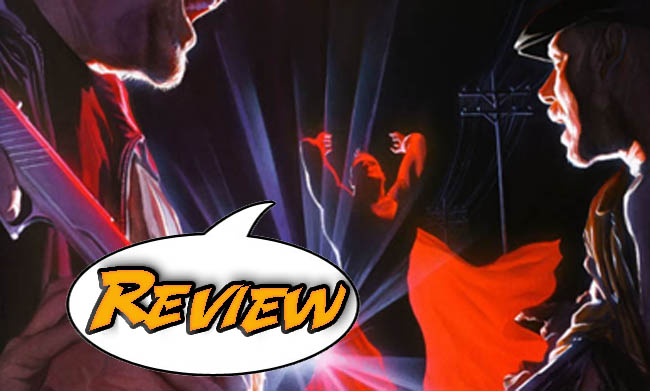 For the first time in quite some time, we have a big anniversary issue that actually IS the issue that it purports to be.  Captain America, The Hulk, Wonder Woman and Daredevil all had false 600th issues, while Wolverine and Deadpool both for some reason invented #1000’s.  Action Comics debuted back in 1938, making this issue a legitimate issue 600, although the weekly frequency of the book in the late 80’s could be considered cheating.  In any case, the Man of Steel returns to his original title this issue after a pretty long absence, and the question in my mind is this:

Am I the only one who finds Alex Ross’ cover image creepy as all heck? Previously, on Action Comics: Clark Kent, secretly Superman, was rocketed from a dead planet by his parents many years ago.  In recent months, he found that the planet wasn’t quite as dead as it seemed, but recent events have returned us (as they always seem to do) to the status quo.  This title has recently been taken over by his childhood friend Lex Luthor, whose experience during the Blackest Night has led him to seek the power of Nekron’s black power ring.  Also:  Doomsday.  Sigh…

Man, This One Is Big…

First thing I can tell you is that we haven’t seen books this thick since Marvel’s 100-Page Monster experiment in the 90’s, as I recall, with somewhere over 90 pages of story content in this anniversary issue.  It’s, esssentially, 4 times the package for not quite twice the price, which makes me happy from the get-go.  The fact that the primary story (by Paul Cornell and a host of artists) is a tie-in to ‘Reign of Doomsday’ dampens that joy just a little bit, but it at least gives us a nice climax to the Lex Luthor arc of recent months.  Lex’s search for phenomenal cosmic power has ended with him attaining his goal, and immediately using it to punish Superman.  The best part of it all comes when Lex reads Superman’s mind to find out what his greatest pain is, and realizes that the Big Red S is none other than his old pal Clark.  In true Luthor logic, though, he is immediately filled with rage that the monstrous alien has been laughing at him all these years.  While the boys from Smallville work out their social issues, everybody else who wears the S crest is getting beaten up by Doomsday, which undermines some of the emotional depth, and the art on the Team Superman sections is very unpolished, very 1993 in it’s execution.

Superman Means A Lot Of Things To A Lot Of People

If you read Superman #400 back in the day, congratulations!  You’re old!  But you also remember how there are a lot of differing thoughts on what it is that makes Superman iconic and awesome and such.  This issue plays with those elements again, as the main story is followed with several tales that work with different elements of the mythos ranging from Lost’s Damon Lindelof taking on the death of Krypton to Geoff Johns’ story of Lois inviting her husband’s old friends over for dinner.  Of course, when those old friends are the freakin’ Legion of Super-Heroes, it makes things a bit more complicated than when I have my pals over for Wii Party and pizza rolls.  There’s a pretty shocking moment wherein Superman gives up his American citizenship to prove a point (!!) and a nicely handled story written by Richard Donner, but the overall effect of this issue is a whirlwind of super-stuff that makes me forgive them for several overt artistic references to the ‘Death of Superman,’ a story that has not aged well at all.

I am frankly overwhelmed by the amount of stuff going on in this issue, which is both a good thing and a bad thing.  It’s good in that the amount of story content for the dollar is very strong, but not so much with the good that it’s hard to remember the first story once you’ve gotten to the end.  I’ve read the issue three times through and I’m still finding things that I missed in prior readings.  I am thankful that we have very little “Superman as Jesus” going on, a metaphor that has officially worn out it’s welcome in my corner of Stately Spoilers Manor, and a couple of points in the issue (Superman arriving at a demonstration and standing silently in solidarity, the hero of a lost race commisserating with the Man of Steel about their status as outsider and protector) are quite unique and excellent.  It’s a shame that DC chose not one, not two but THREE spectacularly unappealing covers, with David Finch’s striking me as particularly misbegotten to look at.  Overall, though, you take the good, you take the bad, and you tally them all up and the good of this issue far outweighs the Doomsday.  Errr…  I mean the bad.  We’re set up for our next big Super-event (which I’m not looking forward to, really), we have a nice cameo from Death of the Endless, Lex Luthor’s quest comes to a fitting (and dramatically appropriate) end, and there’s a whole lot of lovely Superman moments during the journey.  It’s also REALLY #900, which earns a half-star in and of itself.  Action Comics #900 is a pretty strong anniversary special, and earns a well-deserved 4 out of 5 stars overall.

Faithful Spoilerite Question Of The Day: Why do people keep hitting the ‘Superman as Jesus’ button when it’s clear as day that Superman is, in fact, Moses?