As I promised, we get a look at some actual game play!

Like I said earlier, I was going to go play with some of the preview stuff to get a real feel for how the set runs. So, I went to CATT-G, our college gaming club (the one I helped set up and run), and played me some games with the precon. After the fact, I went and took a look at the other two boosters. You can find the deck list here along with the lists and names of the other three Intro Packs for the set. This is a White Green infect deck. “But wait,” you say, “infect is a Phyrexian mechanic and white isn’t Phyrexian.” Well, it is now, one of the changes for the set is the Phyrexian bleed into White and Red. Here we get to see two white creatures with infect, as well as a few other more Phyrexian tricks in white.

Our headliner is the Phyrexian Hydra, a 7/7 with infect for only five mana, awesome. The other rare is the amazing 4 drop Decimator Web; which does more than a card should be allowed to. Other stand out new cards include Rot Wolf, Priests of Norn and Core Prowler.

I got to play six games; two multiplayer and four duels. The first game was a four player free for all in which Walter was a dick. Someone decided he saw infect, and as such I should die. After a couple forestwalking elf rushes I did manage to hit him with a flying Hydra for 9 poison, but it was too little, too late. Games two and three were against a mono-green mana ramp strategy. While I had a Banishment Decree in hand on game one, it didn’t help against an army of 4/4 Oozes, go Gelatinous Genesis. The other though, Decimator Web and Phyrexian Juggernaut took over the battlefield. Games four and five were against a Red Blue combo deck. First, he mana screwed, meh. Second game my deck was too fast, with three three-drops on turn five and 10 counters on turn six. The last game was a six man battle circle, and while I was able to pump a creature into one kill, the army of 60+ Overrunned tokens were able to crush me handily.

I did say at one point that a pack simply opened to open it is a waste of a good pack, so we did a Minimasters with the remaining two packs. For those that don’t know, a Minimasters is a quick limited format where you take an unopened pack, remove the rule/token insert with out looking at the cards and shuffle in three of each basic land, then find an opponent who did the same. Alex and I did a best two of three, where my rare killed me in the first and last games. I got a card I was rather excited for, Blue Sun’s Zenith, but getting three islands in the format just wasn’t in the cards. I did manage two living weapon equipment: Flayer Husk and Strandwalker, though they only helped in the second game. Alex did get to shoot me for ten with a Red Sun’s Zenith, his rare. It was still fun, despite the vastly inferior pack I got saddled with.

SO FAR, SO GOOD 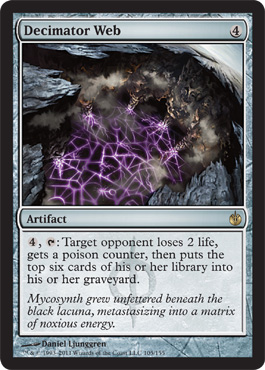 I am still thoroughly enjoying myself. I think infect may actually become a viable strategy for at least the next two years of standard, if not a potential rogue deck for extended. Coolest card so far – Decimator Web. We’ll see if it can’t be topped tonight while I enjoy my midnight prerelease. Reviews and strategy come Monday.