Review: Knights of The Dinner Table #150 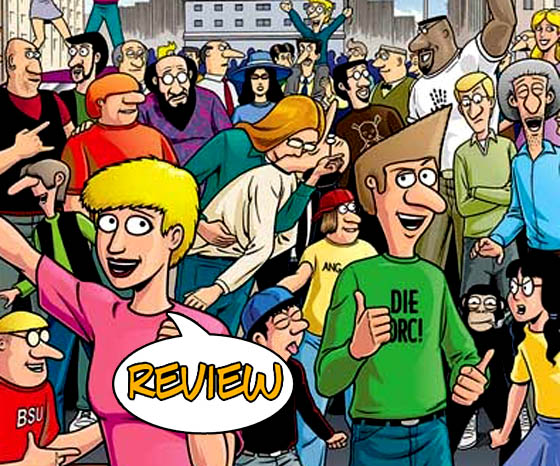 Several years ago, while in college (roughly the late Cretaceous Period) Bruce Otter and I used to drive halfway across the state to Salina, Kansas, to visit several hole-in-the-wall comic book shops and thrift stores for comics.Â  On one such outing, Bruce picked up the first issue of Knights of The Dinner Table, while I, in my wisdom chose to pick up U.N. Force (and I think we all know how well that book did.)Â  Over a decade late, KoDT is still going strong, and celebrated their sesquicentennial (look it up) issue, proving that there’s no idea to simple to be successful.

Previously, on Knights Of The Dinner Table:Â  Four friends (B.A. Felton ((The Game Master)), Brian Van Hoose ((The Rules Lawyer)), Bob Herzog ((The Combat Twink)) and Dave Bozwell ((The One With The Pointy Hair))) are the last remaining members of the once-mighty Knights of the Dinner Table gaming society.Â  Joined by B.A.’s cousin Sarah (the only real role-player in the group) the Knights meet a couple of times a week around B.A.’s dining room to play Hackmaster, Hacknoia, Heroes of Hack-something, and other vaguely familar role-playing games.Â  Their supporting cast has grown, and their adventures have gotten more and more complex over the years, but the central conceit (the fact that if you’ve ever played a role-playing game, you know these conversations) remains strong…

In an economy where venerated publications like Dragon have gone under, it is pretty impressive to see a book like this last as long as it has, so I can forgive the eight or so pages of congratulatory letters that open the book.Â  When we get to the first strip, it’s a done-in-one, a story of long-brewing revenge by Sarah on the other Knights for a long-ago slight (when she left her character in their hands for a night, they had her fighter strip naked, give them all her loot and magic items, and fight a dragon weaponless and naked.Â  She send in her friend Patty (a girl who has had designs on Dave for some time) to temp her character, and the entire night spirals out of control from their.Â  The presence of a new woman in the group leaves the “Untouchable Trio” in disarray, and ends with them broke and trapped in a dungeon with no escape, having had their possessions and coin looted.Â  I don’t know how they’ll deal with this in the long-term storyline of the strip, but it’s a cute ending anyway.

The next strip appeals to me more as a former Game Master than anything else, telling the story of a gaming group who end up each throwing themselves into a pit of lava to their inescapable deaths, only to have the GM end up at a bar with other GM’s collecting on her bet to see how many members of the party they could kill with the stupid pool of lava.Â  Another done-in-one repeats the first strips’s gag, with Sarah’s role-playing finally winning over the other group members’ min-maxing and ultra-violence.Â  Reviews, a tributeÂ to the late Dave Arneson, and home-brew game materials fill out the book, including a fully workable (sort of) version of a running gag in the KoDT strip, “Dawg: The RPG.”Â  It’s a nice issue overall, and avoids the problem that had me leave the book back around issue #110: the endless continuation of the strips and the addition of more supporting material.Â  This is less a comic book than it is a gaming magazine at comic size, but it’s got enough entertainment value that I wasn’t disappointed by the material that didn’t appeal to me.

When Bruce bought issue #1, just before the French Revolution, I didn’t see how “game stories” could carry a whole book, even just in comic strip form, but the Knights have managed to flesh out their game stories and character bits with actual development.Â  Most impressive is an ever-expanding cast of various recognizable types, including the irascible game store owner, the geek who always plays female characters, the computer gamer who crossed over and more.Â  I didn’t expect for this issue to allow me to just jump back into the world of the KnightsÂ the way it did.Â  Even so, there’s a lot of stuff here that I don’t care for or about (especially a phot0-strip called “Fuzzy Knights” with Beany Bablies playing D&D) and the book is obviously aimed at a niche market.Â  If you’ve never played a dice and paper RPG, this may not be the most accessible of titles, but overall it’s a good issue.Â  Knights of the Dinner Table #150 earns a better-than-I-hoped 3 out of 5 stars.Â  You have to give kudos to KenzerCo for making a book like this work, especially for 150 issues, and it’s good to see a non-superhero book suriving in a market like this…Â