A special series â€“ spotlighting the â€œbad guysâ€ and â€œbad girlsâ€ of Project Superpowers â€“ plotted by Alex Ross and scripted by Joe Casey debut here as Dynamite invites you to â€œMeet the Bad Guys!â€

As the heroes return, the villains rise and this debut issue â€“ illustrated by the next Dynamite up-and-coming artistic sensation Chasen Grieshop â€“ features the Green Lama and the debut of Blood Lust! Whatâ€™s this powerful new villainâ€™s connection to the Green Lama? Find out in this special first issue!

The Superpowers battle one of their own in the continuing adventures of Dynamiteâ€™s powerful superhero odyssey! Overseen by Alex Ross and written by Jim Krueger, artist Edgar Salazar continues to sizzle and issue #2 also features the painted â€“ by Doug Klauba â€“ origin sequence (2 BIG pages) of Boy King and his Giant!

Heâ€™s faced them all, but Ashley J. Williams is about to face the greatest horror of his entire deadite-kickinâ€™ career â€“ a comic book convention! But this ainâ€™t any olâ€™ comic book convention, this one features a special appearance from the President of the United States of America â€“ Barack Obama! How do things go from there when Ash and Obama are in the same place at the same time? And did we happen to mention that the Necronomicon is there doing the thing it does best â€“ turning ordinary humans into the demon possessed undead!

This special Army of Darkness mini-series event is written by Elliott (Army of Darkness/Xena) Serrano, illustrated by Ariel Padilla and features covers by Todd (Amazing Spider-Man) Nauck and a special to be announced artist!

From the pages of writer Robert E. Howard comes the debut of Dynamiteâ€™s Thulsa Doom!

Written by Kull writer Arvid Nelson and illustrated by Lui (Red Sonja) Antonio, the opening story arc also features cover artist Alex Ross! Featuring the origins of the ultimate anti-hero, Thulsa Doom #1 opens after the destruction of Atlantis, when the world was in chaos and Thulsa sought his own path to ultimate power!

With the rest of The Boys out of the picture, the surviving members of Payback find themselves at an advantage of four to one- unfortunately for them, the one is Butcher. As the carnage unfolds, Vought struggle with ongoing internal divisions, Hughie calls in reinforcements, and Annie finds herself up against the Seven’s biggest guns- but an unexpected ally may yet save her honor…

The fun and games go on hold as The Boys’ true mission is revealed, and secrets are spilled regarding the worst day in recent American history. As Vought-American’s true agenda is revealed, the corporation makes plans to take things to the next level- and the Homelander hints at a certain scheme of his own…

From the classic movie, The Good, The Bad, and The Ugly! The Man with No Name rides again, this time under the veteran hand of writer Chuck (G.I.Joe) Dixon in a brand-new Dynamite series!

After delivering his bounty last issue, the Man is on a new trail, one the leads to a $5000 bounty for Miles Devereaux, a thief of epic proportionsâ€¦.

Get on board with Buck Rogers, writer Scott Beatty and artist Carlos Rafael! And letâ€™s not forget about those awesome John Cassaday covers! Issue #3 continues the exciting opening arc as Buck finds out more about his new home in the 25th Century and continues to long for the past he left behind

â€œThis is sort of the makeover that Battlestar Galactica got, but in comic book form.â€œ â€“ ComicsWaitingRoom:

The penultimate issue in Dynamiteâ€™s acclaimed Sherlock Holmes comic book event! After Watson appeals to Mycroft Holmes and Sherlock himself arrives at the scene end of last issue, can the worldâ€™s greatest detective unravel his greatest mystery?

This is it as writer Brian Reed sends off his Red Sonja in style and Dynamite plans a momentous event to occur in Red Sonja #50 as the welcome writer Joshua Ortega and the return of artist Mel Rubi in the thrilling â€œQueen Sonjaâ€ event! Be there!

Welcome to issue four of the complete Dracula, last issue we saw Lucy eat most of London, without anyone being much the wiser, and we saw Dracula roaming about menacingly too. This issue, the characters get in on the action, and realize some of the things that have been going on. The star of this issue is Mina though, sheâ€™s kind of the star of the whole series, but this issue she proves totally indispensible. Thank goodness the other characters know that and keep her safeâ€¦ohâ€¦.waitâ€¦

Artist Francesco Francavilla returns to the pages of Zorro! Under the skillful hand of Eisner nominated writer and cover artist Matt Wagner, Dynamiteâ€™s Zorro series continues with issue #15 and the beginning of our third story arc. This time, El Zorro faces a band of merciless pirates and the line continues to blur between the masked avenger and his alter-ego Diego! Covers by Matt Wagner and Francesco Francavilla!

DYNAMITE ENTERTAINMENT is proud to welcome Gath Ennis and Darick Robertson’s The Boys as they present a special anniversary hardcover collected edition of the comic book series everyone is talking about! This special edition hardcover is limited to initial orders only!

Collecting the first 6 issues of the controversial new series from PREACHER writer Garth Ennis and artist Darick Robertson (TRANSMETROPOLITAN)! Don’t miss this dark, twisted look at SUPERPOWERS, super – people, and the men and women who make sure the world’s “heroes” never go too far. Also features an introduction from writer, actor and producer Simon Pegg, the creator and star of Shaun of the Dead, Spaced and Hot Fuzz, and over 50 pages of never-before-printed bonus materials! Recommended for Mature Readers.

This massive 200 plus Page Hardcover Edition also features bonus materials such as sketches and commentary from Ennis along with a complete cover gallery by series cover artists John Cassaday and Garry Leach! Recommended for Mature Readers.

The complete Greg Pak run of Dynamiteâ€™s New Battlestar Galactica series (issues 0-12) is collected here in one massive omnibus edition! Best of all, as a bonus to our fans – the special â€œPegasusâ€ one-shot is also featured in this massive softcover collection featuring a story by Brandon Jerwa and Jonathan Lau!

The Terminator is back as Dynamite once again puts John Connor up against Skynet and the dark future as envisioned in the blockbuster films!

Helmed again by writer Simon Furman, joined by artist Lui (Red Sonja ) Antonio and cover artists Richard (Dark Tower) Isanove and Stjepan Sejic, “Revolution” tells a story set in the dark future of the Terminators and the present day where John Connor and his mother Sarah are on the run from the enemies sent against them from the future!

Borderline, originally published in Italy, is a 600-page epic created by Risso and Trillo with whom the artist has previously worked on a slate of other projects. This powerful piece of graphic fiction has never before been available in the United States in English. Now Borderline â€“ described by Harvey and Eisner Award winning creator Risso as a sci-fi post-apocalyptic story that openly shows the miseries and kindness of Humankind â€“ is available in English for the first time from DYNAMITE ENTERTAINMENT

Volume 3 weighs in at an impressive 160 pages filled with Risso’s gorgeous artwork and Trillo’s fantastic ideas – This is a must-have for every fan of comics and art! 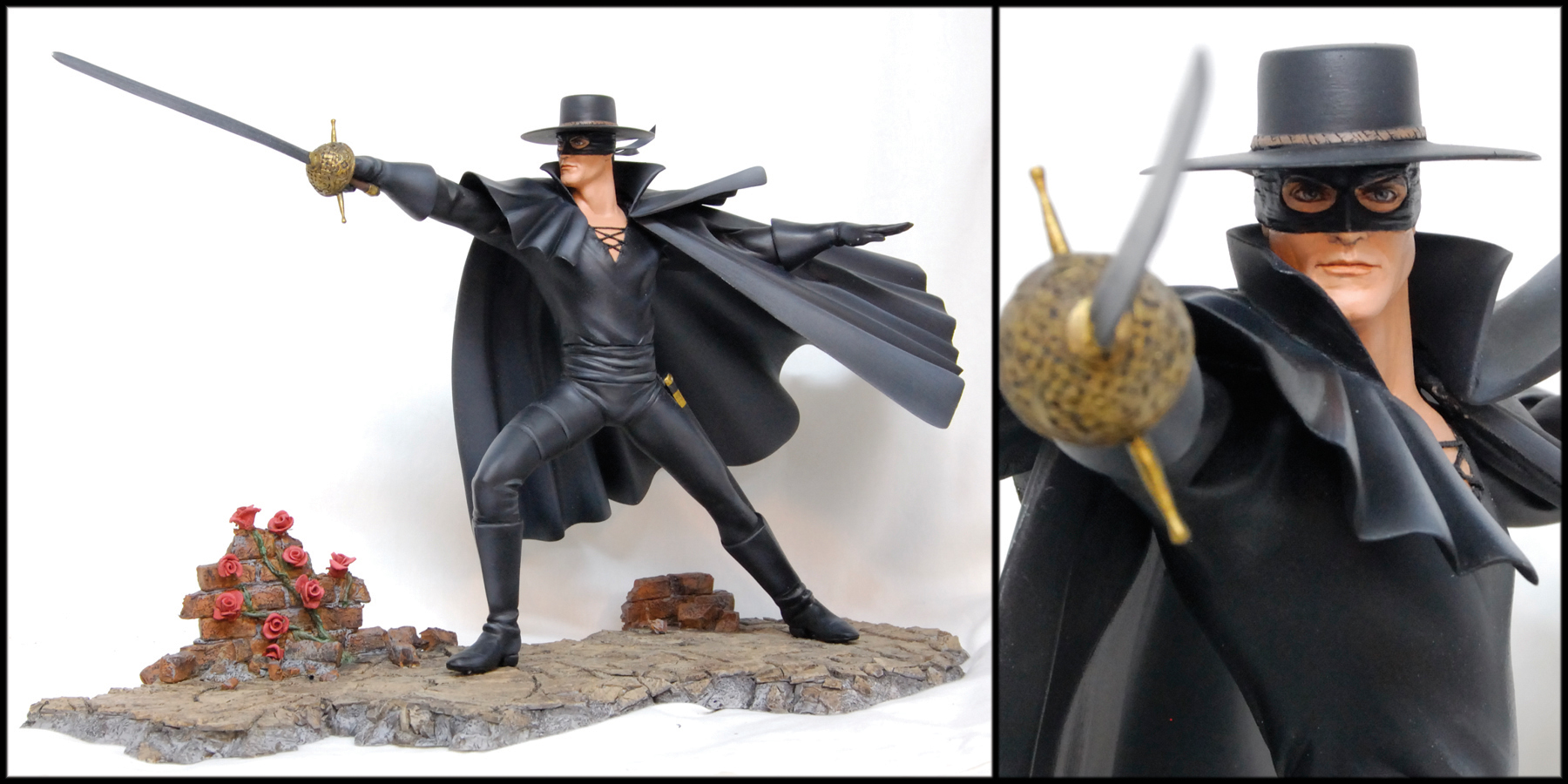 Appearing about toÂ  carve his â€œZâ€ into Sergeant Gonzales the piece measures 9â€ high on a beautifully enhanced cobblestone base 16″ long by 7″ wide, this breathtaking statue captures all of Wagner’s clarity, attention to detail, and understanding of 3-Dimensional composition.

Dynamite proudly presents the return of yet another legend as we unveil the all-new Zorro 90th Anniversary Statue!