Or – “Wouldn’t Somebody Have Noticed That SHIELD Was HYDRA Before This?” 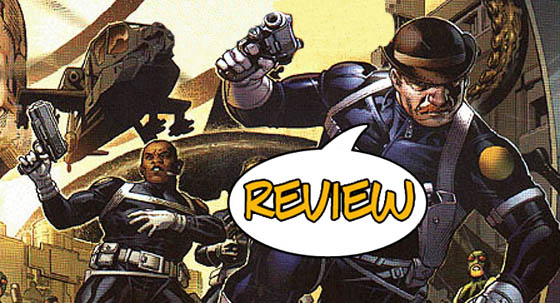 And does anybody else think that New Warriors was axed to avoid confusion with this title?

Previously, on Secret Warriors:Â  Nick Fury’s discovery that SHIELD was nothing but a front created by Hydra opens a lot of really hard-to-answer questions…Â  I mean, seriously, this was a government agency back in the day, which was actually brought down once before (during which time there was discovered to be a conspiracy behind the entire agency that led to them being infiltrated by aliens who theoretically might have noticed such things) and then restructured under the aegis of the United Nations…Â  In all the years of the Marvel Universe, nobody ever thought to peek behind the curtain and see Madame Hydra hiding out in the wings?Â  This single storytelling problem underlines aÂ  lot of the issues that I have with this particular story hook and the story being told in general.Â  But, in any case, last issue a teenage girl was maimed in the name of something that may be justice, and now there’s repercussions galore for all the Secret Warriors…

We begin with Quake and Druid in the deserts of Australia, and she’s very angry with Druid for some reason.Â  “Things are bad,” he says, “I get it.Â  I don’t know why you’re so upset with me.”Â  She points to a pile of wreckage and storms “YOU CRASHED THE PLANE!”Â  Heh.Â  Before they can kill one another or starve to death, the mutant Gateway arrives with a strange young lad wearing aboriginal paint and a loincloth.Â  “Hello, white people.Â  Thirsty?”Â  The look on his face is pricless, and Stefano Caselli does a really good job with the entire sequence.Â  Elsewhere in the world, Nick Furey arrives at a remote barr where he meets Jasper Sitwell, former agent of SHIELD, as well as Gabe Jones and Dum Dum Dugan of the original Howling Commandos.Â  Apparently, when Stormin’ Norman Osborn took over the reigns of SHIELD, apparently over 1000 agents quite on the spot, and went with Gabe and Dum Dum to private contracting.Â  Dugan greets him warmly, but Gabe gives him the cold shoulder.

Back in Fury’s office, JTÂ Slade (theÂ Warrior called Hellfire) is ransacking Fury’sÂ office, looking for something, when he’s discovered by the son of Ares, who immediately opens a secret hidden door, behind which are half a dozen Nick Fury, Life Model Decoys, android doubles of Nick, each one with a little door in it’s chest.Â  This worries me, actually.Â  No one has yet considered whether this Fury is actually Fury, have they?Â  What if it’s actually the Gremlin from the Soviet Super Soldiers or something?Â  Eeeerie…Â  Briefly, we see Stonewall reading to the recent dismemebered Yo-yo, and then we cut back to the Howling Commandos secret headquarters.Â  Dugan and Fury reminisce about women they’ve known who give a great massage (old soldiers, y’see) when suddenly Gabe Jones addresses the elephant in the room.Â  “YOU, Nick.Â  You’re the problem…”Â  says Gabe, “You left us and we crashed hard.Â  And now you just walk back in like it’s old times.Â  Well, #$&@ you, Colonel.”Â  Nick remarks that he’s still the same, the world has changed…Â  It’s a nicely done scene, actually, with good dialogue from Bendis here.Â  Back in the outback, Druid and Quake manage to recruit the young man (after a meal of slow-roasted Kangaroo) who apparently has the power to bend space and time or something, while the heads of Hydra decide to do something mysterious and eeeevil, and Fury prepares to lead the Howlers into action against his own former agents.Â  “What are you going to feel when you have to put a bullet into one of your own men, Nick?” asks Gabe Jones.Â  Fury responds, “Recoil.”

That sequence bothered me greatly, actually, in that Nick Fury (while always a soldier) seemed to be a soldier with a conscience, the kind of man who wouldn’t kill agents of SHIELD just because they made a bad work decision, but this is the new tougher-than-a-two-dollar-steak Nick for the brave new Dark Reign world.Â  This book is really difficult for me to like, simply because of the greytones of the morality involved.Â  I do tend to like the big heroic icon guys with the clear-cut sense of right and wrong, but this isn’t the book for that.Â  Still and all, it’s an intriguing premise, well executed with terribly effective art from Caselli, and some nice touches by Bendis, only undermined by what feels like a lack of depth in Nick’s tough-guy facade.Â  Secret Warriors #4 earns a more-good-than-bad 2 out of 5 stars, and has at least made itself welcome on my pull list for more than the requisite 6 issue tryout stint.Â  Depending on where it goes, this could become the flagship title of Marvel’s (you should excuse the expression) brand new day.