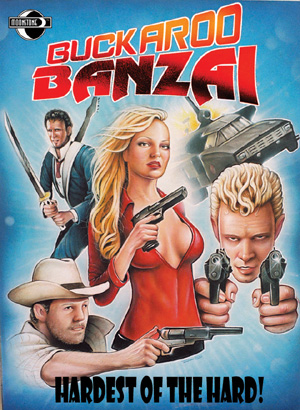 Moonstone Books is ahead of the curve once again, by sending out its covers and solicitation information for titles arriving in September 2009.

THE PHANTOM: GHOST WHO WALKS #5

â€œReturn of The Eastern Darkâ€ Pt I (of II)

When people go missing, The Phantom finds himself drawn into what appears to be a slave trade ring, but turns out to be far more insidious. Can The Ghost Who Walks overcome The Eastern Dark, or will the sun set on our hero once and for all?

RETAILER INCENTIVE: With any order of 5 or more, retailers will receive one FREE b/w Romanoski variant

â€œBullock is transforming the Phantom into a character that isnâ€™t just plot driven and isnâ€™t just character driven but rather an appropriate mixture of the two.â€- Broken Frontier

THE SPIDER #2: â€œTomahawks From Hellâ€
Story: Will Murray
Art: Giovanni P. Timpano
Cover: Gary Carbon
32pgs, b/w grayscale, $3.25
The Spider: the most violent and ruthless of all crime fightersâ€¦A cloaked, fanged, borderline crazy denizen of the dark force-feeding hard justice with a pair of â€˜45â€™s!
Join Doc Savage novelist Will Murray as a new reign of terror has begun in Manhattan, something not seen in generations.Â  All over town, people in all walks of life are found murderedâ€”scalped!

â€œRed Tomahawk.â€ Demands that all citizens of Manhattan evacuate the city. Itâ€™s being taken back by its original ownersâ€”the Mohawks.

Nita is kidnapped. Then what appears to be her blonde scalp arrives at police HQ in a box.Â  But the box contains a clue and so a maddened Spider follows that clue to the real Red Tomahawk, to rescue Nita and end the reign of blood.

RETAILER INCENTIVE: any who order 3 or more copies, can receive one FREE b/w NOIR variant cover!Â  One copy per retailer limit.

It’s bad enough that agents Wade and FlynnÂ are stuck undercover commanding a snowbound, run-down military fort under attack by slow-moving, hungry corpsesâ€¦but NOW they’re forced to accommodate a corrupt business mogul with friends in high places — and a distractingly beautiful wife. They’re losing control of the unruly soldiersâ€¦and things are about to getÂ much, much worse.

The PHANTOM: The Man Who Cannot Die

Just in time for the Sci-Fi Channelâ€™s Phantom movie!

The Ghost Who Walks in all out action, including the controversial storyline â€œThe Invisible Childrenâ€ ripped from the headlines of todayâ€™s Africa!

From OPRAH to Fall Out Boy to People Magazine to Rolling Stone!
Invisible Children is a charitable organization that helps educate and save African children who are pressed into military service. The movement has received national media attention from TV shows, to celebrities, to the press!

This volume collects the Phantom issues #12-20, and #26!
High adventure and intrigue in the African jungle, on the high seas, and in the streets!Â  There is always justice that needs to be served, whether itâ€™s in the presentâ€¦or the past.

â€œThrilling and excitingâ€- Broken Frontier
â€œBullock and Szilagyi continue to excel.” â€“ CitC
â€œThe Phantom is worth the price of two comic books from DC or Marvel.” â€“ ComicsÂ  Bulletin

The PHANTOM: The Legacy and the Law

Just in time for the Sci-Fi Channelâ€™s Phantom movie!

This volume collects the two SOLD OUT Phantom graphic novels â€œLegacyâ€, and â€œLaw of the Jungleâ€.

The ultimate origin of the Phantom!-as told by the Ghost Who Walks himself!

Ripped from the pages of the very first Chronicle, (the on-going journal/diary written by every Phantom) this original epic GN reveals how a centuries-old tradition of fighting piracy, cruelty and injustice was passed down from one generation of Walkers to the next.
Then, every society has its laws: some written, some unwritten-for some are forbidden to be even spoken aloud. These are the laws that get passed on from one generation to the next. The penalty for breaking these laws is often swift and uncompromising.
Combine the lack of this knowledge with the unhinged mind of a deadly assassin who is calling out the PHANTOM, and you get nothing but fire.

32pgs, color, $3.99
(covers come: 75%Â  J.Anthony Kosar, 25% David Easterly)
In this wild and wooly rockinâ€™ adventure, find out the secrets of the woman who likes all things that are pointy.Â  What was she like before this exquisite and bad ass bass player joined the Hong Kong Cavaliers, and how did she join up?Â  Join Buckaroo as he uses stealth, a Gatling gun, Renoâ€™s head, and some squishy mutates to extricate her from her trouble, as well as mop up a sloppy mess!Â  What is her hush-hush all-seeing connection with the World Crime League?Â  Was it a love connection at first sight with Perfect Tommy and Lady G?Â  And remember, as always, the watermelon is optional.â€¨RETAILER INCENTIVE: if you order 5 copies or more, you receive one FREE variant J. Anthony Kosar cover edition! One variant per store limit.