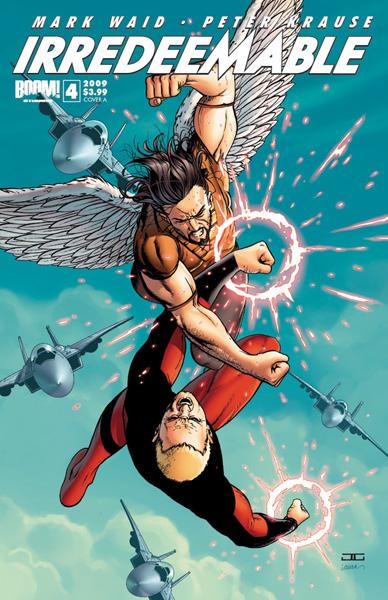 Boom! Studios has released the solicitation information and cover images for titles arriving in July 2009.

Everyone knows that Poe created the detective genre, but did you know he was a detective himself? Finally the secret can be revealed for the first time! Enter the world of POE and follow the famous author of darkness as he tracks the killer of his brotherâ€™s friend. Supernatural adventure for fans of books like HELLBOY! â€œDeep into that darkness peering, long I stood there, wondering, fearing, doubting, dreaming dreams no mortal ever dared to dream before.â€ â€“Edgar Allan Poe

Alex Garland, screenwriter of 28 DAYS LATER, lays out a story connecting the film 28 DAYS LATER to its sequel 28 WEEKS LATER in a new ongoing series! Focusing on Selena, on of the three survivors of the first film, as she embarks on an epic journey of Selenaâ€™s return to Great Britain! Co-written by HEXED and FALL OF CTHULHUâ€™s Michael Alan Nelson and drawn by newcomer sensation Declan Shalvey.

The living dead walk among us! Zombies have taken over the planet! Humans only exist as novelty attractionsâ€¦or worse. But today is the day of revolution and soon the tide will turn on undead supremacy! Academy Award-nominated writer Kim Krizan (BEFORE SUNRISE, BEFORE SUNSET) presents a zombie epic like no other! Ripped from the pages of the critically acclaimed Zombie Tales anthology! Collected in one volume for the first time!

â€œAll Speed. No Limits.â€ The end isnâ€™t nearâ€¦ itâ€™s here. America has become a wasteland, leaving the few cities that remain transformed into impenetrable fortresses. NICK MASTERS a driver, the best there is. If you need something picked-up, delivered, or disposed of, Nickâ€™s your man. But when he fails to deliverâ€¦ all hell breaks loose. Part two of the epic saga that redefines the science fiction action genre. From the writer of HEXED and FALL OF CTHULHU, Michael Alan Nelson, collaborating for the first time with EUREKA creator Andrew Cosby!

Worldwide best-selling sci-fi author Philip K. Dickâ€™s award-winning DO ANDROIDS DREAM OF ELECTRIC SHEEP? – the basis for the film BLADE RUNNER â€“ comes to comics in an innovative, ground-breaking 24-issue maxi-series with the full text fully illustrated. In 2021 Earth is a far uglier place. Most humans are on Mars but Deckardâ€™s back home, among the wretched. See San Francisco as its denizens try to live in the aftereffect of World War Terminus. If they think human life is hard, try being an android among the massesâ€¦

She has solved every mystery known to man. But there is one mystery that remainsâ€¦ UNKNOWN! Boarding a speeding train of horrors is the only way that Catherine and Doyle can find the next clue in their mystery of the afterlife. A new original mini-series from Mark (KINGDOM COME) Waid in the vein of RUSE with EXCALIBURâ€™s Minck Oosterveer.

Nobody believed novelist Alan Ripley when he revealed he created UNTHINKABLE terror scenarios for the government. Now the CIA doesnâ€™t just believe him â€“ they blame him. Can he survive interrogation in time to stop his next nightmare from coming true? Only writer Mark (TWO-FACE YEAR ONE, CYBORG) Sable and artist Julian Tedesco know for sure.

FALL OF CTHULHU: NEMESIS concludes in this issue, as it must, with all-out war between man and Gods for the fate of Atlantis! Nyarlathotepâ€™s despicable machinations are wrought upon the legendary islandâ€¦ and heâ€™s planning on taking a living, breathing souvenir with him.

What if the worldâ€™s greatest hero decided to become the worldâ€™s greatest villain? The Plutonianâ€™s deadly rampage continues. His former comrades-turned-victims are beaten, tired, and searching for hope. A â€œtwilight of the superheroesâ€-style story that examines super-villains from the writer of KINGDOM COME and EMPIRE!

THE INCREDIBLES #0 launches an all-new story arc written by legendary scribe Mark Waid with covers by Matt Wagner! We take a quick glimpse at the recent pastâ€¦and witness the action-packed birth of everyoneâ€™s favorite super-powered babyâ€”Jack-Jack! But labor pains were never THIS difficult! The Parrs will have to fight through a phalanx of evil before the new addition to their family can safely arrive! The action-packed prelude to next monthâ€™s launch of THE INCREDIBLES ongoing!

Nemo, Dory and Marlin continue their dangerous journey, searching for a way to rescue their dying reef! Facing incredible odds, Nemo travels the great blue sea to save the one thing that matters most of allâ€”home. Will Nemo and company survive an eerie encounter with a giant squid?

An all-new CARS arc! Lightning McQueen is hanging out with his friends in Radiator Springs when he realizes that everyone knows his story, but he doesnâ€™t know anyone elseâ€™s. McQueen wants to know how his friends ended up in Radiator Springsâ€¦and why they decided to stay. Issue #1 of CARS: RADIATOR SPRINGS shines the showroom spotlight on Flo and Ramone!

Roger Langridgeâ€™s celebrated run on THE MUPPET SHOW comic book begins a new, zany arc! Scooter discovers old documents which reveal that a cache of treature is hidden somewhere within the theaterâ€¦and when Rizzo the Rat overhears this, the news spreads like wildfire! Meanwhile, Animalâ€™s acting very strangelyâ€”heâ€™s now refined and well-mannered!

Zhaan and Dâ€™Argo are alive! Crichtonâ€™s not married to Aeryn anymore! Whatâ€™s going on? Crichton tries to find out as he finds himself in an alternate timeline. While examining Aeryn and Crichtonâ€™s son an accident occurred that sent Crichton off into this strange world. How does he get back? Will he ever see Aeryn again?

The Muppets tell the Robin Hood legend for laughs, and itâ€™s the reader who will be merry! Robin Hood (Kermit the Frog) steals from the rich and gives to the poor. In this concluding issue, imprisoned Robin awaits the gallows. Can the Merry Men spring Robin free and defeat Prince John? If only they could find the â€œnarratorâ€ and discover how the story is supposed to endâ€¦ Series features â€œAâ€ covers from David Peterson, the Eisner Award-winning creator of MOUSE GUARD!

Ka Dâ€™argo lives on â€” only in this pulse-pounding FARSCAPE mini-series set in continuity during season 3 between episodes â€œRevenging Angelâ€ and â€œFracturesâ€! Dâ€™Argo once took his place to save him from torture but now General Sterikk desires to take on his Luxan brethren in a no-holds barred brawl! The pulse-pounding last issue.

Sci-Fi Channelâ€™s smash hit show returns for another series masterminded by the creator of the show, told completely in continuity! Zoe and Gene have to team up to save Eureka from a horde of genetically altered teens who are kinda acting like zombies (but without all the gross fleshy stuff).

This action-packed trade collects all four issues THE INCREDIBLES: FAMILY MATTERS. Acclaimed scribe Mark Waid has written the perfect INCREDIBLES story! What happens when Mr. Incredibleâ€™s super-abilities start to waneâ€¦and how long can he keep his powerlessness a secret from his wife and kids?

See how Lightning McQueen became a Piston Cup sensation in this pulse-pounding collection! CARS: THE ROOKIE reveals McQueenâ€™s scrappy origins as a local short track racer who dreams of the big timeâ€¦and recklessly plows his way through the competition to get there! Along the way, he meets Mack, who help McQueen catch his lucky break.

This hilarious trade collects the first four issues of THE MUPPET SHOW, written and drawn by the incomparable Roger Langridge! Packed full of madcap skits and gags, The Muppet Show trade is certain to please old and new fans alike! If you have a favorite Muppet, chances are itâ€™s featured in this show-stopping collection!

Print out our handy dandy BOOM! Studios Diamond order form and turn it in to your local comic shop to save your copy of your favorite books!