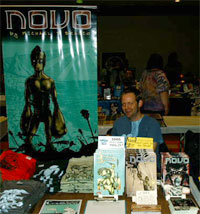 A few days after the Small Press and Alternative Comics Expo (S.P.A.C.E.), Michael S. Bracco (BIRTH, NOVO) and H.C. Noel (MR. SCOOTLES) are both still reeling from the creator-friendly show.

Bracco, who received a finalist award for his graphic novel BIRTH, had this to say about his 2nd time at the show, “SPACE is a great show to do.Â  I love the vibe of the show, the true sense of a comic community and being among collegues of such a high caliber.”Â  A handful of select creators managed to qualify as a finalist for the S.P.A.C.E. prize (which honors the best of small press and indie comics) and that fact wasn’t left unknown by the BIRTH writer/artist, “Getting the nomination was very validating.Â  [Creating] comics can often feel like an unforgiving road and it’s nice to have someone like Bob Corby out there to help us feel validated after a lot of what can feel like unrewarding work!”. 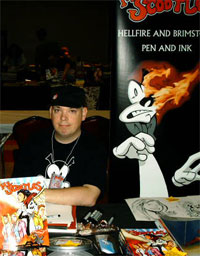 Michael’s other graphic novel series, NOVO, (a continuation of the events that take place in BIRTH) centers around the sole survivor of two warring alien species and the journey he takes to discover his past so he can find meaning in his life.Â  NOVO recently won the 2008 honor of being voted the “Best Comic of Baltimore” by the Baltimore City Paper.

H.C. Noel (or Howie to those that know him best) enjoyed his first time at the show exhibiting his artwork and graphic novel, MR. SCOOTLES.Â  H.C. also had this to say about submitting his work for the 2009 S.P.A.C.E. prize, “I put SCOOTLES and VINCENT (a mini-comic about a murderous painter that uses the blood of his victims to create works of art) up for the SPACE award so if I get a nomination for either book I’ll definitely be back!”.

Taking part in a self-publishing panel, Noel looked to expand the awareness of his graphic novel creation. “Being a part of the panel on “self-publishing and independent comics” at SPACE was great. I felt like I got to share a bit of my past experiences self-publishing Mr. SCOOTLES and how much the market has changed. I also got to tell the story of how Alterna Comics brought new life and energy to Scootles and how the digital market is an important addition to the art form. I hope to join the panel discussion again next year.”.

If you’re interested in learning more about these two talented creators, visit www.spaghettikiss.com and www.hcnoel.com.