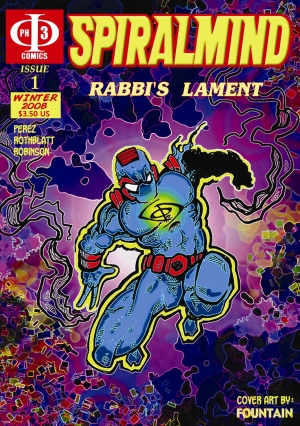 Since its debut in January, the Spiralmind comic book series has picked up steam and a devoted fan base around the country. Hugely popular entertainment website Ainâ€™t It Cool News gives Spiralmind a big thumbs-up, saying â€œNot [in]a style you see often in this post-Image era of cross-hatches and sketches, and thatâ€™s what made reading this first issue so refreshing. The story aims high with a conflict of biblical proportions, but boiled down to its basics, itâ€™s got an @$$-kicking rabbi, a spandex clad superhero, and werewolves…Issue one also has a full article on Ancient Judaic Exorcism. This is definitely unlike any comic Iâ€™ve read beforeâ€¦and a hell of a lot of fun to readâ€¦ SPIRALMIND is definitely a comic book reading experience you wonâ€™t forget.â€

Created by two natives of the worldâ€™s largest border metropolis, Ben Perez and Matt Rothblatt dot the fantastical city of Ninevah where Spiralmind battles to save humanity from mystical demons with details of their truly unique hometown. Their background in military service also contributes to the story as well as plans for spreading the comic around the world. Plans are in the works with local military base Fort Bliss to provide free copies of Spiralmind for soldiers being deployed overseas. â€œOur soldiers deserve a little bit of fun and a little bit of home,â€ says Perez. â€œWeâ€™re happy to work hard and do what we can in return for all they do.â€

In acknowledgement of their bicultural, bilingual environment, Perez and Rothblatt always intended for Spiralmind to be available in two languages and the Spanish version of Issue #1, Rabbiâ€™s Lament, hits stores May 1. â€œOur plan since starting this venture was to make Spiralmind accessible to everyone in El Paso and Spanish speakers around the world,â€ says Rothblatt.

Perez adds, â€œLiving in El Pasoâ€”where Spanish is primarily a first language for residentsâ€”we realize the importance that â€˜En EspaÃ±olâ€™ holds for people. This goes for the rest of the country too! As of 2008, Hispanics made up 15% of the U.S. population and are projected to make up 30% by 2050. From a business standpoint, itâ€™s a no-brainer. DC Comics did a Spanish language issue of Blue Beetle, a Hispanic character living in El Paso. The writer Jai Nitzâ€”who lives in Lawrence, Kansas but has family in Laredo, Texasâ€”was able to pull off the issue beautifully while representing Spanish and the ‘Spanglish’ spoken here on the border. Thanks to guys like Jai and some of his predecessors, Spanish comics are considered an important part of a shifting paradigm in the comic book industry.â€

â€œIf things go well, weâ€™ll be able to translate it into other languages in the future,â€ Rothblatt explains. â€œBut having Spiralmind available in Spanish was not just a business decision; it was a decision of the heart. We know there are many kids and young adults living in El Paso, Ciudad Juarez [Mexico] across our border, or even in Omaha, Boston, and Raleigh who speak Spanish. These books are for them. We want them to be able to embrace our stories just as an English speaker would our English version.â€

Jahaziel Rodriquez, who assisted Perez and Rothblatt in translating Rabbiâ€™s Lament, says, â€œWhen I first heard about Spiralmind from Ben and Matt, I was excited for them. When they mentioned a Spanish translation, I was excited for me. As a fan of comics and a fluid Spanish speaker, I had not seen many good comics in Spanish, but Spiralmind had the chance to be exactly that. So I jumped at the opportunity to bring something to life that had not previously been seen. Hispanic-American fans of the genre were not being given the privilege to enjoy strong comic stories in their native language and I wanted to be involved in the process of making that possible.â€

Spiralmind can be ordered online from www.comixpress.com or www.indyplanet.com. Updates about the series and its creative umbrella, Phi3 Comics, can be found at www.myspace.com/phi3comics. Spiralmind will celebrate Free Comic Book Day on May 2 with an appearance by creators Perez and Rothblatt in their hometown of El Paso at Rebels Comic Vault. Upcoming plans for Spiralmind include appearances at Comic-Con in June and Issue #2 ready in time for summer.