Or – “Love In The Time Of Cauliflower Ear…” 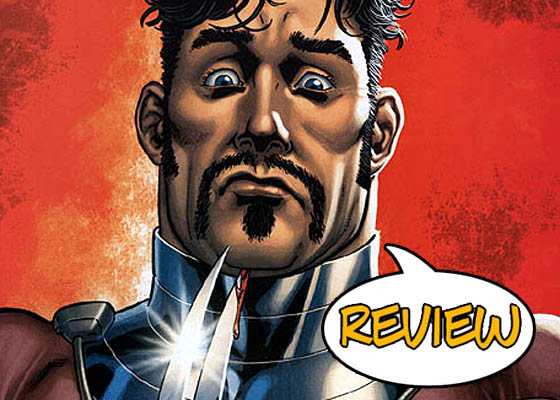 After last issue’s events, the members of the Six have discovered that one of their own is NOT a traitor at all, but a noble dunderhead who couldn’t think of any way to protect his friends other than shooting them and stealing their ride.Â  Scandal Savage may have found the secret to bringing her lost love back from the dead, and Bane has had his brains beaten out with a series of bricks (and with Bane, you can’t imagine that he’s got much to spare.)Â  This issue, an even worse fate faces three of the Secret Six:Â  A DOUBLE-DATE.

Previously, on Secret Six: After a wild cross-country ride during which they were stalked by every two-bit

mercenary, gun-for-hire, rustler, cut throat, murderer, bounty hunter, desperado, mug, pug, thug, nitwit, halfwit, dimwit, viper, sniper, con man, Indian agent, Mexican bandit, mugger, buggerer, bushwhacker, hornswoggler, horse thief, bull dyke, train robber, bank robber, @$$-kicker, $#!+-kicker and Methodist between Coast City and Metropolis, the Secret Six (Bane, Cat-Man, Deadshot, Ragdoll, Scandal, and new recruit Jeannette) have saved themselves from oblivion, taken down the towering menace of crimelord Junior (secretly Ragdoll’s baby-sister), Sixer Scandal managed to maintain possession of one of the most powerful artifacts in the DCU (if it is, indeed, real) and, not coincidentally, had the living crap beaten out of them.Â  Having suffered being poisoned, stabbed, shot, hung, stretched, nearly disemboweled, and just short of drawn and quartered, the Six have found their way to Rutland, Vermont for some much-needed down-time and healing up.Â  But Floyd Lawton, aka Deadshot, has decided to show his newest teammate a night on the town, Secret Six-style.Â  Anybody ready to place a bet on how much collateral damage we’re about to witness?

Of all the images I’ve seen in the various appearances of these characters, this issue opens with the most ridiculous one of all:Â  the daughter of Vandal Savage going to Wal-Mart…Â  Excuse me, to Val-Star.Â  Her driver is one a Jeannette’s slaves, a toadying little fool who continually bids her to punish him for his incompetence.Â  When he parks in a handicap spot by mistake, he responds, “Forgive this fool, your radiance.Â  It is quite unforgivable, and cutting off my hands and feet is the only possible punishment for a crime so heinous… so irredeemably…Â  If I may ask her glory, what is a handicap?”Â  Hee.Â  Scandal responds that HE is her handicap, and they begin shopping, only to have her reverie interrupted by a tall redhead who sweeps her off her feet for a huge kiss.Â  Scandal isn’t sure at first who the stranger is, but when the girl tells Scandal thatÂ she should be a dancer, Scandal realizes that it’s the stripper from her birthday party.Â  Introductions are made, (“Scandal Savage?Â  Are you SURE you’re not a dancer?”Â  Heh…) numbers are gotten, and Scandal isn’t entirely unsure that this girl isn’t her beloved Knockout brought back to life.Â  Meanwhile, back atÂ the House of Secrets, Deadshot prepares for his date with Jeannette, but Cat-Man steadfastly refuses to play wingman.Â  “Why not take the bent little castrated corndog?” asks Cat-Man, pointing to the overexcited Ragdoll.Â  “Yes, yes, why not take the the bent little castrated ME?” trills Rags….Â  Double Heh.Â  Scandal arrives just in time to agree to be Deadshot’s huckleberry, but insists on a few conditions, the first of which being that he can’t wear his black and green checked sportscoat.Â

Later that night, the foursome of Floyd, Scandal, Jeannette and Liana the stripper agree on a solemn pact: No one dies on their date.Â  Liana laughs at how silly they’re all being, (“Yes.Â  We’re all known for our hilarious japes,” replies Scandal) and takes them to a strange little nightclub where everyone dresses as a superhero and raves the night away.Â  Deadshot, unfortunately, is being pursued by one of the skinheads from a previous issue (Floyd slapped him down for not having the authority to properly handle a gun, took his money and cigarettes, you may recall) who sorely tests his non-fatality vow.Â  Scandal likewise has a problem when a schmuck dressed as Blackhawk puts the moves on her date, beating down a crowd of costumed cretins while holding back from murder.Â  They exit for dinner, and Liana surprises everyone with her insight into human nature (“Some people can’t tell the difference between being sad and being angry.Â  They lash out at the people who care about them.”) and Floyd again has to excuse himself to deal with the skinhead menace, but this time, he’s brought a mob of friends.Â  Jeannette easily takes them all down, starting by hitting them with her TABLE, and the foursome gives up and heads out for what we presume is some sordid super-happy grown-up fun time, not realizing that Ragdoll is hidden in the trunk of their car.Â  We are treated to a three-page view into the mind of the Ragdoll, a cartoony world where everyone loves him, Batman thanks him for his help taking down the criminals of Gotham, (“This town stinks.Â  You should move.Â  It’s FULL of weirdos.”) Superman enlists him for help against the Khund, and he even teams up with the Teen Titans (“I bet none of you are legal.”)Â  It’s the best part of the issue (and that’s actually saying something) ending only when his partners finds him locked in the trunk, hallucinating and dehydratedÂ THREE DAYS LATER…Â

This issue is a joy to read, but really hard to explain why without quoting the entire issue for you.Â  Gail Simone is in full force with the fun asides (such as when Scandal tries to buy dog collars for Jeannette, and uses the stockboy’s neck for a comparison of size) and excellent dialogue, and the moment where young Liana stuns the immortal girl, the banshee, and the paid killer with her insight is beautifully handled.Â  Regular penciller Nicola Scott isn’t on board for this one, but I have no complaints about Carlos Rodriguez, other than his Scandal not being quite as petite as I always picture her being.Â  I like the fact that the consequences of the previous awesome scene have come back in a big and unexpected way, and the Jeannette/Deadshot relationship is a creeeeeepy yet brilliant flower in a garden of interesting ideas.Â  Secret Six #8 earns a romantical 4 out of 5 stars, and once again illustrates why this series is a hidden gem amidst the various detritus of company crossovers on the stands…Â