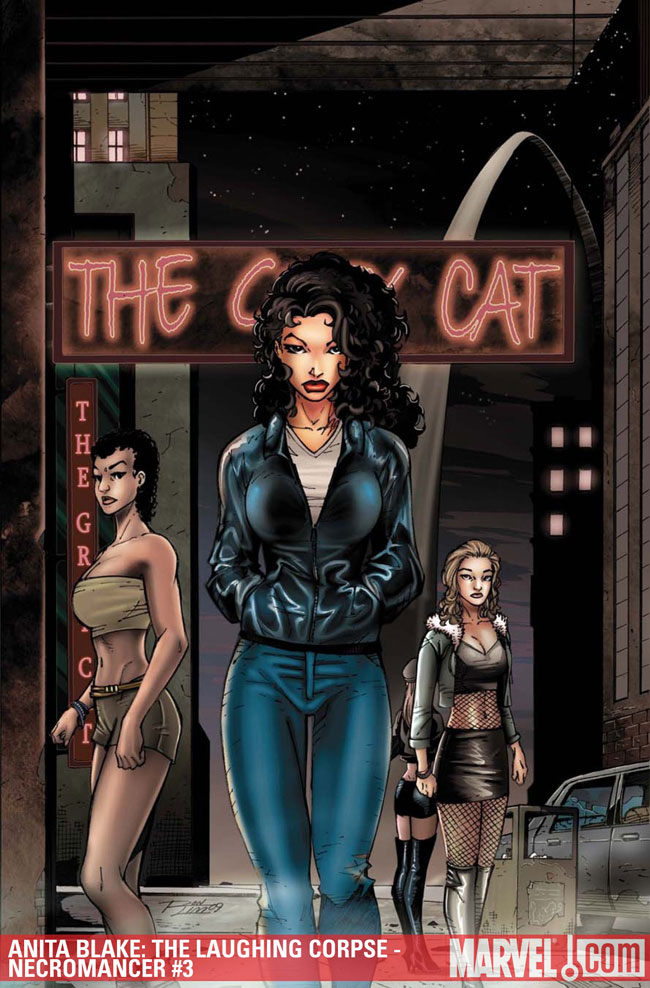 The official press release is below the jump, but in a nutshell, vampires are a hot commodity once again, Laurell K. Hamilton’s Anita Blake has sold well in novel form, and has done almost as well with the Marvel Comics adaptation, so the next best thing is for IFC to take the property to the television to be adapted by X-Files guru Glen Morgan.Â  The television feature is expected to be ready for the summer of 2010.

Rights were acquired from Hamiltonâ€™s agent, Merrilee Heifetz of Writers House. There are currently 16 books in the series, all published in the US by Penguin Group (USA), with more than 6 million copies in print worldwide. Seven of the novels have made the New York Times Bestseller list and the most recent one, “Blood Noir,” debuted at #1 on the list on June 15, 2008. The next highly anticipated Anita Blake novel, SKIN TRADE, hits shelves June 2, 2009.

Mixing mystery, fantasy, and horror, the film will center on the character of Anita Blake, a street-savvy, down-to-earth vampire hunter with a lousy dating life and a penchant for bringing dead people back to life. Blake also works as a police consultant investigating preternatural crimes. Tough, sexy and independent, Blake battles the supernatural as she attempts to solve a variety of paranormal mysteries, come to terms with her own abilities, and navigate a complex string of romantic and political relationships which include a master vampire and an Alpha werewolf.

â€œThis unique partnership with Lionsgate, After Dark, Laurell and Glen continues IFC tv’s commitment to provide groundbreaking content that you cannot find anywhere elseâ€ said Evan Shapiro, president of IFC tv and Sundance Channel. “Anita Blake on IFC will offer a fresh and unique take on the genre; the type of approach that defines our brand.”

â€œâ€˜Anita Blake: Vampire Hunterâ€™ marks the first time in IFC tvâ€™s history that we have created a fictional feature film for the network. IFC is appealing to its core base of men ages 18-34 who are looking for vampire content. The popularity of the network in this demographic indicates that there is a clear demand for films that delve into provocative topics and nothing is more classically provocative than vampire loreâ€ said Jennifer Caserta, EVP and general manager of IFC tv. â€œAnita Blake fits perfectly with our successful original programming.â€

â€œLaurell has created a fascinating heroine in Anita Blake and we quickly recognized the on-screen potential for this vivid character,â€ said Kevin Beggs, Lionsgateâ€™s president of television programming and production. â€œWe have an outstanding creative team and are excited to be moving forward with IFC, which will allow us to fully explore the complex world of Laurellâ€™s highly intriguing and erotically charged novels.â€

â€œWe are excited to have acquired this successful property, and to have partnered with IFC and Lionsgate. We look forward to bringing â€œAnita Blakeâ€ to the small screen,â€ stated After Dark Filmsâ€™ Courtney Solomon. â€œI am confident that television viewers will be captivated by Laurell

K. Hamiltonâ€™s spellbinding stories, much as readers have devoured the popular novel series.â€

ABOUT IFC
Operating under the mantra “always, uncut” IFC (The Independent Film Channel) recommends and creates genre-bending content that indulges the alternative culture obsessions of our influential audience and makes it available across multiple platforms: on-air, online and On Demand. In pursuit of what’s new, next and relevant, IFC creates original non-traditional comedies like The Whitest Kids U’ Know and Z Rock and irreverent non-fiction such as The IFC Media Project. IFCâ€™s original programming airs alongside a comprehensive independent film library of award-winning titles and cult classics, as well as content inspired by Music, Web, Gaming, Animation, News & Culture and more. IFC broadens the audience for independent culture through its exclusive live coverage of notable film and music events like the Independent Spirit Awards and South by Southwest. The network’s on demand offering, IFC Free, gives audiences the opportunity to watch premieres of all of IFC’s original series before they air on the linear network. IFC Media Lab offers financing, professional development and distribution opportunities for aspiring film makers. IFC is a subsidiary of Rainbow Media Holdings LLC.

ABOUT LIONSGATE
Lionsgate is a leading next generation studio with a major presence in the production and distribution of motion pictures, television programming, home entertainment, family entertainment, video-on-demand and digitally delivered content. The Company is leveraging its content leadership and marketing expertise into a global multiplatform entertainment company through the recent acquisition of TV Guide Network, one of the 25 most widely distributed cable networks, the recent acquisition of TV Guide.com, a premier content and navigation portal, partnerships that include the FEARnet branded VOD and Internet horror channel with Sony and Comcast, the expected fall 2009 launch of EPIX, a new premium entertainment channel with partners Viacom and MGM, investment in the leading young men’s digital distribution platform Break.com, ownership of the premier independent television syndication company Debmar-Mercury and an alliance with independent filmed entertainment production and distribution company Roadside Attractions.

The Company is a market share leader at the North American theatrical box office for calendar 2009 propelled by such theatrical box office successes as TYLER PERRY’S MADEA GOES TO JAIL, MY BLOODY VALENTINE 3D and THE HAUNTING IN CONNECTICUT, which opened this past weekend. Other recent successes include SAW V, RELIGULOUS, FORBIDDEN KINGDOM, RAMBO and THE BANK JOB. Lionsgate has forged a strong position in television with the production of such critically-acclaimed series as â€œMad Men,â€ â€œWeedsâ€ and â€œCrash,â€ the distribution of Tyler Perry’s â€œHouse of Payne,â€ â€œFamily Feudâ€ and â€œSouth Park,â€ and upcoming shows including Tyler Perry’s â€œMeet The Brownsâ€ and â€œThe Wendy Williams Show.â€ In addition, the Company’s home entertainment business, propelled by such recent DVD successes as TRANSPORTER 3, SAW V and TYLER PERRY’S THE FAMILY THAT PREYS, is the industry leader in box office-to-DVD conversion rate and has market share of nearly 7%. Lionsgate handles a prestigious and prolific library of approximately 12,000 motion picture and television titles that is an important source of recurring revenue and serves as the foundation for the growth of the Company’s core businesses. The Lionsgate brand remains synonymous with original, daring, quality entertainment in markets around the world.

ABOUT LAURELL K. HAMILTON
Laurell K. Hamilton is the author of not one but two New York Times best selling series, and her first Anita Blake: Vampire Hunter novel, â€œGuilty Pleasuresâ€ is now a hugely successful graphic novel published by Marvel Comics. This series has garnered such a huge following, that there are now more than 6 million copies of Anita in print worldwide, in 16 languages. Hamiltonâ€™s work is noted for its strong female characters set in vivid and complex storylines that mix a number of genres, including erotica, horror, fantasy, science fiction, mystery, and romance. She can be contacted through her agent, Merrilee Heifetz, at Writerâ€™s House.