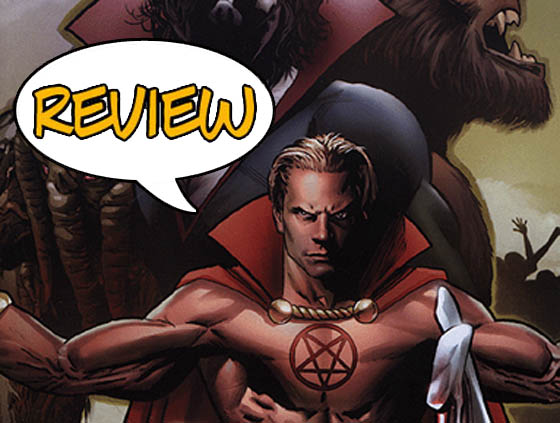 The first Marvel Zombies miniseries was a revelation,Â Dead Days was excellent, and the Army of Darkness crossover weirdly interesting.Â  The Fantastic Four issues were disappointing, andÂ Marvel Zombies 2 ended up beingÂ a huge blow to the success of the franchise, making it all seem lame and silly, an effect which I reasoned came from moving the characters to the Marvel Universe proper, and removing all chance that the monsters would win again.Â  Marvel Zombies 3, however, managed to recapture some of the fun, the drama, and the actual horror of seeing your heroes biting and slashing and consuming human flesh.Â  With this installment, theÂ dark creaturesÂ from beyond are about to meet theÂ dark creaturesÂ within the Marvel Universe which does beg a question…Â  Someone once said that if you fight monsters, you risk becoming a monsters yourself.Â  But what happens if you START OUT as a monster?

Previously, on Marvel Zombies:Â  I have always said that the Sentry is bad news, and nowhere is that more obvious than when he brought a virus back to the world of what would become the Marvel Zombies.Â  His infection ran rampant throughout the world, infecting superhumans, and quickly overwhelmed and ate everything in sight.Â  During the events of Marvel Zombies 3, the last remaining vestiges of the superheroes broke on through to the other side, and into the mainstream Marvel Universe through Man-Thing’s nexus of realities.Â  During the invasion, former Spider-Man villain Morbius, the Living Vampire was captured byÂ his own zombie/vampire doppelganger (aÂ vambieganger?) and used as a source of bloodÂ and sustenance.Â  Though the major portion of the invasion was repulsed, at least a few Marvel Zombies made it into the 616 Universe at large.Â  Morbius, feeling personally responsible for the mess, has called together a few old friends under the banner of the Midnight Sons, to put to the test the old adage about fighting fire with fire.

ARMOR (Alternate Reality Monitoring and Operational Response), a branch of SWORD which apparently didn’t go under when SHIELD did, has sent out Morbius’ new team to stop a zombie incursion on a cruise ship, as a horde of zombie Men-Fish (the people of Namor’s former antagonist the Piranha) swarm out of the sea and begin eating people alive.Â  Quickly enough, a mystic portal opens, and out come the new Midnight Sons:Â  Jacob Russoff, aka Jack Russell aka Werewolf By Night; Jennifer Kale, last mage of Atlantean power, probably best known for being in Howard The Duck back in the day; Daimon Hellstrom, the Son of Satan; and the Living Vampire himself.Â  Morbius reveals (as part of his recorded “Living Will” to his wife) that he has created a vaccine for the zombie plague, and all the Sons have been innoculated.Â  “Of course,” says Morbius, “as with all vaccines, that means that there is a slight chance that those inject will actually develop a full-blown version of the disease.”Â  As such, each Midnight Son has strict orders to terminate any of his partners who starts eating people.

Meanwhile, somewhere in the Carribean, we see the reason why there’s a horde of zombie fish-men, as a shambling figure slogs out of the surf, carrying a human head.Â  Ironically, it’s the head that seems to be doing all the talking, singing “Movin’ Right Along” from the Muppet Movie.Â  Some of you will be excited to see that the head is the zombie version of Deadpool, but I’m more thrilled at the identity of the other zomb: Simon Garth, the former protagonist of ‘Tales of The Zombie.’Â  Simon and Wade (or, honestly, Wade’s monologue) reveals that they escaped during the last series, but even he is surprised as Simon walks inexorable into the presence of a strange man wearing leather and chicken bones, the new Black Talon.Â  The amulet that causes Simon to walk is susceptible to control from a powerful houngan like Talon, and he realizes exactly what it is that the twosome represents.Â  He orders them sent to the zombie pens, much to Deadpool’s rage, but being a severed head, he’s not as combat-useful as he used to be.Â  Meanwhile on the cruise ship, the Midnight Sons find something even more horrible than a horde of zombie amphibians:Â  a clutch of zombie amphibian eggs, which quickly begin to hatch, forcing them to face dozens more zombie Men-Fish!Â  As for Black Talon, he makes a call to someone, offering a new powerful weapon against the superhumans in return for tons of money.Â  “Go on…Â  I’m listening,” says the man he is pitching to… THE #&@$ING HOOD.Â

This issue isn’t a bad first outing for a series, as Fred Van Lente really handles Marvel Universe ephemera in a way that isn’t offputting, while feeding the egos of the old dudes who remember what he’s name-checking.Â  I like the balance of characters (with the sole exception of Son of Satan, whose presence here undoes the events of the recent “Last Defenders” miniseries in a single line of dialogue) and Zombie Deadpool is pretty awesome.Â  Kev Walker’s art is still wonderfully moody and evocative, and overall, it’s a good issue.Â  As upset as I was at the end of MZ3 to find that it ended with a cliffhanger, this at least starts to vindicate that decision.Â  They’ve also found a relatively clever way to offset the “zombies can’t win” aspect with the chance that one of our own heroes could turn cannibal and have to get squooshed.Â  Marvel Zombies 4 #1 earns a respectable 3 out of 5 stars, and I can even deal with seeing the $&@$ing Hood in this context, as it makes perfect sense for the plot to turn the way it does…Â  Even f you didn’t care for previousissues, it’s giving this series a second wind, and might be a good place to consider coming back onlineÂ the Marvel Zombies franchise.