Or – “A Weekly Publishing FrequencyÂ Means Occasionally Having To Catch Up…” 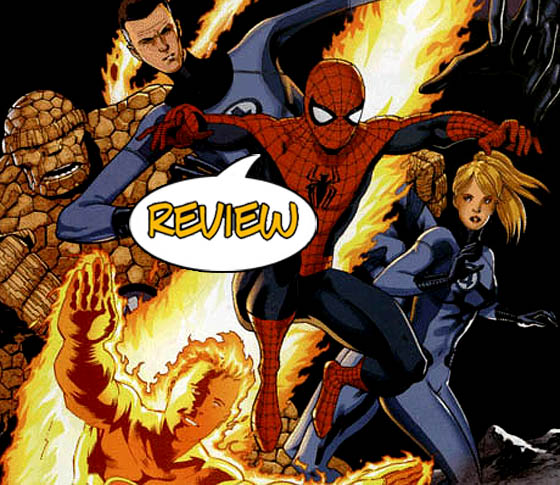 So, Spider-Man’s life will never be the same.

And this time… they mean it.Â

Previously, on Amazing Spider-Man:Â  Peter Parker has had a pretty questionable couple of years.Â  Aunt May was near-fatally shot by a Kingpin assassin, after which Peter sacrificed his entire married life to save her in a

bargain with Mephisto.Â  Embarking on a Brand New (metaphorical) Day, Spidey has found that his roommate is part of a conspiracy to brand him a serial killer, that his best friend’s girlfriend is the latest crazypants killer in the Green Goblin legacy, and that Spider-Man’s own actions have led to the New York mayoral race being held up to where neither candidate seems likely to take office.Â  Trying to heal up from gunshot wounds, dealing with the standard issue Peter Parker bad luck, and unaware that the father of J. Jonah Jameson has entered his circle of friends, Spider-Man is about to embark on a series of adventures that literally change the entire status quo of his world.Â  (Of course, the phrase “status quo” with regard to comic book universes is always a silly expression…)

In issue #589, we get a one-shot dealing with old-school Spider-Man nemesis, The Spot, last seen in the truly awesome ‘Super-Villain Team-Up: MODOK’S 11’ miniseries.Â  A local crimelord named Dmitri Ivankov has been recieving strange notes that imply impending harm to him, consisting of only a black spot on a white piece of paper.Â  Ivankov is also trying to donate a ton of money to May Parker’s FEAST Project, but the principled old broad won’t take his dirty crimelord money. With some very Todd MacFarlane-reminiscent art, we see Spider-Man and the Spot again cross masks, and Spotty has even learned a few new tricks after being exiled to his own dimension of spots by Temugin, son of the Mandarin in SVTU:M11.Â  Spot nearly kills Ivankov, but Spider-Man’s webbing (ADVANTAGEOUS!!!) allows him to pull off the last minute save.Â  As for Spot’s motive?Â  A child injured by Invankov’s criminal acts turns out to be the Spot’s own son, and Spidey channels his inner Christian Bale to scare some minor criminals into giving up the truth about their boss, and even sends Spot’s kid a family heirloom: Daddy’s copy of Treasure Island.Â  It’s a done-in-one, and nicely handled at that.Â  I’d give this issue a stand-alone 3 out of 5 stars.

Issue #590 kicks off a two-parter bringing back two welcome things to the Marvel Universe: the first is the family vibe between Spider-Man and the members of the Fantastic Four, and the second is the wonderful art of Barry Kitson, late of The Order and Legion of Super-Heroes fame.Â  It seems that, “a couple of years ago,” Spidey and the FF took a trip to the Macroverse (notÂ to be confused withÂ the Microverse) and interacted with a mysterious society.Â  When innocents seemed to be in danger, Spider-Man found his great power yearning for great responsibility, and leapt in to save the day.Â  In the here and now, the new Norman Osborn regime has left Spidey at loose ends, when Reed Richards suddenly arrives with a mission: a distress call from that same world in the Macroverse.Â  After a cute scene in which he gives Spider-Man a blank check for his services (“It’s made out to “Cash.”Â  That’s like my middle name,” says a grateful Spidey) they set off for the hidden Macroverse, only to find that time runs differently there, and there have been entire generations of people who have heard their legends, andÂ have turned the five of them into a new religion.Â  Worst of all, Johnny Storm flips out when he realizes that Spider-Man is unmasked in his statue, and realizes that Spider-Man has somehow messed with their minds, erasing the Fantastic Four’s knowledge of his secret identity.Â  He sets Spider-Man’s mask on fire in a fit of pique, and is shocked to see what is under the mask…Â Â Â Â

…nothing at all, thanks to Susan Richards’ powers.Â  Sue supports Spider-Man’s decision to keep his true name secret, and Johnny slowly fumes as Peter puts his mask back on.Â  While the mayoral election runs it’s course back home, Spider-Man and the FF have to clean up a mess that their actions years ago caused.Â  We watch the team again defend a city against invaders, we see life at home continuing.Â  Carlie Cooper finds Harry Osborn in a drunken stupor after being abandoned by his fiancee Lily (Menance) Hollister, Jonah Jameson tries to reconcile with his wife Marla, while Randy Robertson (son of Robbie) bonds with a girl called Norah whom I don’t know, and May Parker finds a suitor of her own: J. Jonah Jameson, SENIOR.Â  Heh…Â  Peter and Johnny continuously feud about Spider-Man’s identity being secret, and what it means.Â  “My real’s life’s back on Earth!” cries Parker, “With my real friends and real family, and I’m missing it!”Â  The mayoral race seems to fall to evil guy Walter DeClun and Aunt May’s boss, Mr. Li, and Dexter Bennett finds that the DB is failing after his rabble-rousing about a murderous Spider-Man has gone bad.Â  Most ominous of all is the last message on Peter’s machine: “Hey, Tiger.Â  I…Â  I though you should know I’m–” says a seemingly feminine voice just as the answering machine cuts off because it’s full.Â  The battle between warring factions is resolved in a very “Frank Gorshin wearing black and white makeup in Star Trek” fashion, and Susan Richards convinces Spider-Man (with a little help from Reed, who promises to make the FF’s minds impenetrable to manipulation) to unmask for the second time in as many months.Â  The FF stand stunned for a minute before all their memories return in a rush.Â  “Hi, Pete,” says Johnny with a smile.Â  “Long time nosee.”Â  Awww.Â  It’s a touching moment made even sweeter by the Thing ruffling Spider-Man’s hair.Â  They get back home and find that they’ve been gone for TWO MONTHS, during which time New York has chosen a Mayor by landslide, and while I’m not spillin’ the beans, the character was once played by the same actor who played Schillinger in “Oz.”Â  Spider-Man realizes that his weird life has gotten even weirder as we fade to black.

My boss at the comic shop (Gatekeeper Hobbies, Huntoon and Gage, Topeka!Â  Ask us about our Richie Rich back issues!) says that Dan Slott doesn’t write good Spider-Man stories, but 590 and 591 put the lie to that conceit, at least for me.Â  Slott nails Spider-Man’s characterization, from geeking out with Reed, to slap-fighting with Johnny, to his insistence that they had to help innocents, even though the team was sworn not to interfere.Â  The whole sequence with removing the mask was very nicely handled, and the fast-forward view of two months of the Spidey cast’s backstory was an innovative way for the new ASM braintrust to reset the world around him.Â  With his former greatest nemesis as the head of superhuman affairs, and the new mayor waiting in the wings, Peter Parker’s life is about to get even more chaotic.Â  Part of me thinks that this is not a good thing, and worries where the edicts and whims of Marvel editorial might take Pete (who, no matter what Joe Quesada thinks, is not intrinsically more interesting as a loser or a single man) but taken on their own merits, these two issues rate a pretty impressive 4 out of 5 stars, for a composite score across all three issues of 4 out of 5 stars, (because we round up and I don’t want to create a 3.75 star graphic.)Â  The Marvel Universe right now is pretty well broken, and the fun, it seems, is supposed toÂ come in seeing how we rebuild the characters and situations.Â  Presuming that Spider-Man editorial can keep the book looking and reading this smooove, I’d say that Mr. Parker is in pretty good hands…