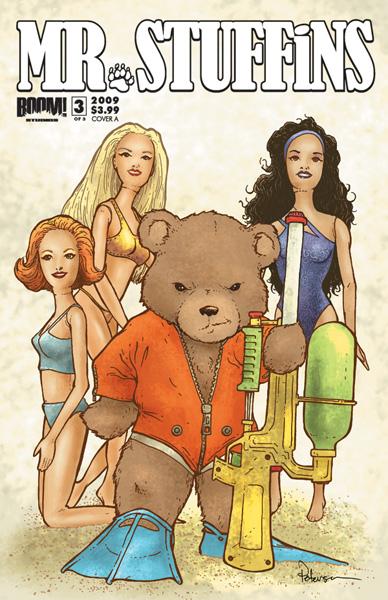 Boom! Studios has provided Major Spoilers with the cover images and solicitation information for titles arriving in June 2009.

Think working for a superhero is tough? Try working for an ex-superhero! Edge is disgraced and out of work. The only one who believes in himâ€¦ is Jimmy Lohman – Edge’s much abused personal assistant. When Jimmy’s dedication leads him to the bottom of a superhero conspiracy that could render the entire city asunder, who’s the real hero now?

“All Speed. No Limits.” The end isn’t near… it’s here. America has become a wasteland, leaving the few cities that remain transformed into impenetrable fortresses. NICK MASTERS isn’t just a driver, he’s the best there is. If you need something picked-up, delivered, or disposed of, Nick’s your man. And he’s all business. But when he fails to deliver an important package to a local crime lord, Nick’s business suddenly becomes very personal… A science fiction action piece in the vein of MAD MAX from the writer of HEXED and FALL OF CTHULHU, Michael Alan Nelson, collaborating for the first time with EUREKA creator Andrew Cosby!

THE BOOK THAT INSPIRED THE FILM BLADE RUNNER COMES TO BOOM with backmatter by Warren Ellis! Worldwide best-selling sci-fi writer Philip K. Dick’s award-winning DO ANDROIDS DREAM OF ELECTRIC SHEEP? has been called “a masterpiece ahead of its time, even today” and served as the basis for the film BLADE RUNNER. BOOM! Studios is honored to present the complete novel transplanted into the comic book medium, mixing all new panel-to-panel continuity with the actual text from the novel in an innovative, ground-breaking 24-issue maxi-series experiment!

Sci-Fi Channel’s smash hit show returns for another series masterminded by the creators of the show, told completely in continuity! EUREKA creators Andrew Cosby and Jaime Paglia are joined by writer Jonathan L. Davis (THE DUKES OF HAZZARD) continue to follow the town of eccentric geniuses with a issue filled with surprises no one will expect!

FALL OF CTHULHU returns with NEMESIS â€” an epic origin story revealing the secret history behind Nyarlathotepâ€™s favorite companion. Whatâ€™s behind those feline eyes? Be prepared for the shock of your life as BOOM!â€™s bestselling horror title continues.

Ka D’argo lives on â€” only in this pulse-pounding FARSCAPE mini-series set in continuity during season 3 between episodes “Revenging Angel” and “Fractures”! Jool learns more about D’Argo’s days as in the Luxan military, serving under General Sterikk, a man who will play a major part in D’Argo’s future!

FARSCAPE creator Rockne S. Oâ€™Bannon is back! TVâ€™s science fiction masterpiece FARSCAPE continues with the same hit writing team from the first sold out mini-series! Chricton has discovered the cause of why everyone on Moya is out for each other. To cure them, he must shrink down go onâ€¦ a fantastic voyage you will never forget!

The biggest selling DVD of all time comes to comics! Nemo, Dory and Marlin embark on a journey to save their dying reef. Facing dangerous waters and incredible odds, Nemo travels the great blue sea to save the one thing that matters most of allâ€”home. In this issue, Nemo’s old friend Gil lends a helping fin! Series ‘A’ covers by Amy Mebberson with ‘B’ covers by Erica Leigh Currey.

Legendary writer Mark Waid’s action-packed INCREDIBLES story concludes! Mr. Incredible discovers the shocking truth behind his recent loss of powers… and must defend his family against a shocking menace from the past! Covers by Sean “Cheeks” Galloway and Marcio Takara!

A comic book industry event: a new original ongoing superhero series from Mark Waid! IRREDEEMABLE dares to ask the question: what if the world’s greatest hero decided to become the world’s greatest villain? Does Plutonionâ€™s past hold the key to his current deadly rampage? Or does it even matter? A “twilight of the superheroes”-style story that examines super-villains from the writer of KINGDOM COME and EMPIRE!

â€œMy teddy bear’s a secret agent!â€ This is it! What everyone’s been waiting for: a teddy bear vs. the huge military robot smackdown! The fate of the Tyler family rests in Mr. Stuffins handsâ€¦er, paws. Paws of fury that is! Series Features “A” covers By MOUSE GUARD’s David Petersen.

The Muppets tell the Robin Hood legend for laughs, and itâ€™s the reader who will be merry! Robin Hood (Kermit the Frog) and his band of outlaws steal from the rich and give to the poor. But much to the Merry Men’s disbelief, Maid Marian (Miss Piggy) has stolen Robin’s most valuable possessionâ€”his heart! Series features â€œAâ€ covers from David Petersen, the Eisner Award-winning creator of Mouse Guard!

More all-new adventures featuring the world’s favorite toys! Andyâ€™s been working on his science project for weeks, but Rex clumsily breaks one of the pieces! Can Woody and Buzz lead a squadron of toys into the science fair and stealthily repair Andy’s project before he discovers the broken piece? Story by Eisner Award-nominated writer Dan Jolley!

She has solved every mystery known to man. But there is one mystery that remains… UNKNOWN! Revered as the smartest person alive, Catherine Allingham is the world’s most famous private investigator. Follow her adventures as she sets out to solve the one mystery she’s never been able to crack – DEATH! A new original mini-series from Mark (KINGDOM COME) Waid in the vein of RUSE with EXCALIBURâ€™s Minck Oosterveer.

The UNTHINKABLE has just begun! Can Alan Ripley stop his worst-case terror scenarios from coming true? Will he discover who’s REALLY behind the attacks? Or will they discover HIM? The mystery begins to unravel in part two of the explosive new mini-series from the fiendish mind of Mark (TWO-FACE YEAR ONE, CYBORG) Sable and the blood stained brush of THE REMNANT’s Julian Totino Tedesco

The Apocalypse is upon us! Since the beginning of the FALL OF CTHULHU storyline, readers have been anxiously awaiting the moment when all the taleâ€™s threads begin to tie together into the ultimate war between gods and men. As of now, they wait no longer. Let the Apocalypse begin!

This is it! The final (probably), absolute (pretty much) last (finally!) volume of HERO SQUARED (well, maybe.) Find out what happens to Captain Valor, his parallel-world alter ego, Milo, and at least one homicidal ex-girlfriend! DeMatteisâ€™ and Giffenâ€™s geeeenius super-hero series concludes with a finale that will leave you gobsmacked!

Director Walt Becker (Van Wilder, Wild Hogs) makes his graphic novel debut with his sci-fi/fantasy tale of knights in a post-apocalyptic future! The world has been twisted into a rusting and forgotten dystopia- and a new type of knight rises from the ashes to make order out of chaos! Scripted by Michael Alan Nelson, the fan-favorite writer of Fall of Cthulhu. Cover by top WARHAMMER talent Karl Richardson!

Print out our handy dandy BOOM! Studios Diamond order form
and turn it in to your local comic shop to save your copy of your favorite books!