Interview: Alex Tse on Watchmen: Tales of the Black Freighter

From comic to feature film to animated short story, screenwriter Alex Tse has played an essential role in helping transition WATCHMEN beyond its initial incarnation.

Ironically, when it came to bringing the graphic novelâ€™s classic story-within-a-story, WATCHMEN: TALES OF THE BLACK FREIGHTER, Tse wrote the screenplay without knowing what that final incarnation would be.

â€œBlack Freighter went through a lot of incarnations â€“ we talked about doing it live action, then â€˜300â€™ green screen-style, then we decided it would be animated â€“ so I wrote it without a firm idea of the format,â€ said Tse, who had not previously written for animation. â€œI guess I just didnâ€™t treat it any differently than any writing project I normally undertake. And Iâ€™m guessing this was probably like nothing I ever will work on again.â€

TALES OF THE BLACK FREIGHTER is the story-within-the-story of WATCHMEN, revolving around a mariner who is marooned on a distant island after his ship is attacked by the infamous pirate ship, the Black Freighter. He begins to imagine the Black Freighter setting sail for his hometown â€“ and attacking his family â€“ and engages in a desperate mission to return home and save his wife and children. Along the way, fear and desperation begin to play tricks with his mind, and rob the mariner of his sanity â€“ leading him to commit atrocities of his own as he tries to stop the marauding pirates. As told within the Watchmen graphic novel, the story acts as a distorted mirror image of the Watchmen super heroes plight.

â€œIn the book, I think it was written as a parallel to the Watchmen story â€“ with one major difference,â€ Tse said. â€œIn Black Freighter, the sea captain thinks everything he is doing is for a good purpose. But then he realizes, no matter how well intentioned his acts have been, he has done some horrible things. In Watchmen, even though Adrian Veidt says he realizes the consequences of his actions and that he has made himself feel each death he has caused, he never seems to express that pain or sorrow. Thereâ€™s no real remorse for what heâ€™s done. So either he doesnâ€™t fully realize it or he just doesnâ€™t care.â€

Tse said he was particularly focused on keeping the tragic tale grounded in a relatable situation that would allow audiences to understand the marinerâ€™s plunge toward insanity.

â€œI am not a huge fan of movies where youâ€™re just watching someone go crazy â€“ as a viewer, itâ€™s hard to connect to that idea,â€ Tse said. â€œYou need to be able to relate to his situation, to understand why heâ€™s going insane. With Black Freighter, it was important to keep it grounded in the cause of his madness. Heâ€™s been through a traumatic experience, heâ€™s alone, and now heâ€™s doing anything he can to get back to his home and save his family. So when he does these horrible, crazy things, you know heâ€™s doing it to try and save what is dearest to him. An audience can understand that situation.â€ 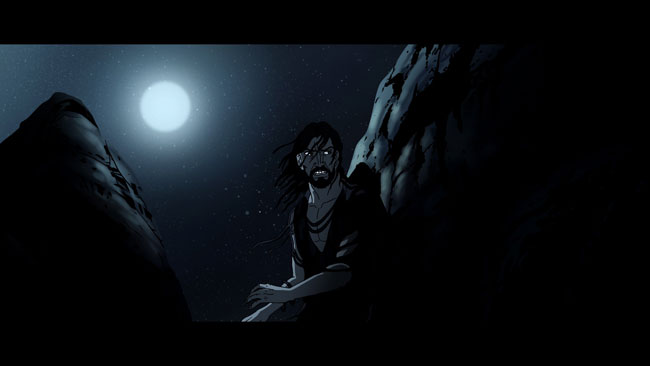