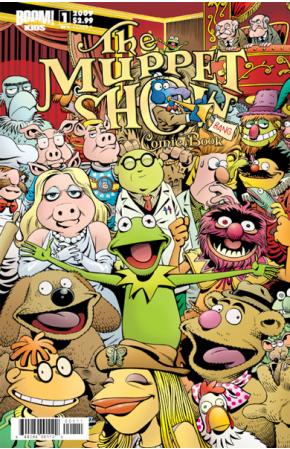 With the release of The Muppet Show #1 and Incredibles #1 this week from Boom! Studios, it comes as no surprise that the company would announce a new imprint called Boom! Kids as an avenue to publish kid friendly content.Â  Included under the new banner are THe Incredibles: Family Matters, The Muppet Show, and Cars: The Rookie.

“We designed BOOM! Kids to differentiate these books from the established BOOM! Studios line, so parents can easily identify age-appropriate material for their kids to read. The new imprint avoids sending children or their parents to the same web site that features some of our edgier fare, like IRREDEEMABLE or HEXED and the irreverent Adult Swim-like humor of SHMOBOTS,” said Editor-in-Chief Mark Waid. “What’s clear from the direct market sales figures is that these books are connecting to kids as well as adults, and as such, we wanted to provide a kid-friendly environment.”

Rodrigo reviewed the first issue of The Muppet Show, and it sounds like a great title for kids, and I’m glad these titles won’t be sharing the exact same name as Mark Waid’s Irredeemable, Unthinkable, and Chtulhu Tales.Â  They are all great titles, just not for the young’uns.

“We love the sophisticated stories of the core BOOM! comics; it’s what we built the company on,” said CEO and company co-founder Ross Richie. “But in the mass market and the direct market, where these books will be seen by children, the branding needs to align with other kids’ content that we publish, from CARS to TOY STORY to MUPPETS to other BOOM! original works that we plan to release. The BOOM! Kids imprint allows us to help parents, keeping our message straightforward and branding the kids’ stuff clearly, and signaling the older-skewing material as appropriate for those audiences.”