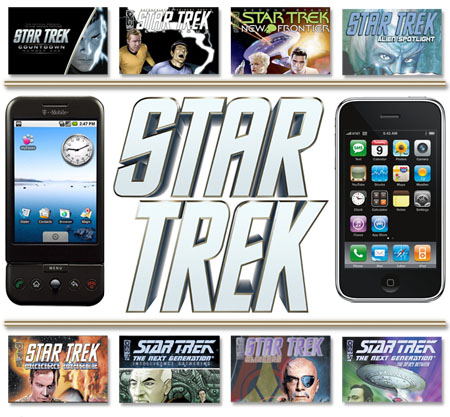 Star Trek: Countdown, the official prequel to the new Star Trek movie being released by Paramount Pictures on May 8, 2009, is going to mobile devices!Â  The four-issue mini-series is now available on Appleâ€™s iPhone and iPod touch, and Googleâ€™s Android Mobile Devices through iVerse Mediaâ€™s digital distribution technology.Â  Visit IDWPublishing.com for more information about Star Trek: Countdown.

â€œStar Trek: Countdown has been one of IDWâ€™s most anticipated titles this year and Iâ€™m happy to make it available to as broad of an audience as we can,â€ said IDW Publishingâ€™s CEO, Ted Adams.

Star Trek: Countdown is a must read for Star Trek fans of any kind, offering important details relating to the upcoming feature film. The story is presented by J.J. Abrams and plotted by Roberto Orci and Alex Kurtzman. It is written by Mike Johnson (Superman/Batman) and Tim Jones, and features stunning art by David Messina (Star Trek: Mirror Images). Messina also provides covers for the series.

â€œAs a die-hard â€˜Trekkieâ€™ myself, I canâ€™t tell you how excited we are to bring this series to Apple and Googleâ€™s mobile platforms,â€ said iVerse founder Michael Murphey.Â  â€œThe scripts by Tim Jones and Mike Johnson are fast paced and compelling, and the artwork by David Messina looks amazing on these devices.â€

About CBS Consumer Products
CBS Consumer Products, a unit of CBS Entertainment, manages worldwide licensing and merchandising for a diverse slate of television brands and series from CBS, CBS Paramount Network Television and CBS Television Distribution, as well as from the company’s extensive library of titles.Â  Additionally, the group oversees the CBS Retail Store and online sales of programming merchandise.Â  For more information, visit www.CBS.com