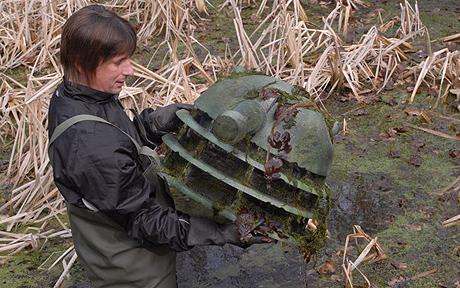 Who knew Doctor Who’s nemeses the Daleks couldn’t swim.Â  Volunteers were cleaning up a filthy pond in Hampshire, England when the Dalek head bubbled to the surface.

“I got the shock of my life when a Dalek head bobbed up right in front of me. It must have been down there for some time because it was covered in mould and water weed, and had quite a bit of damage. One of the dome lights was smashed, but the eye-stalk was intact and the head and neck stayed in one piece as I carefully lifted it out.”

That’s a very cool find, and from what locals have gathered, the menace has probably been in the pond since the 1970s when Tom Baker and crew traveled to the area to film a number of episodes.

Thanks for the reminder, Rob!